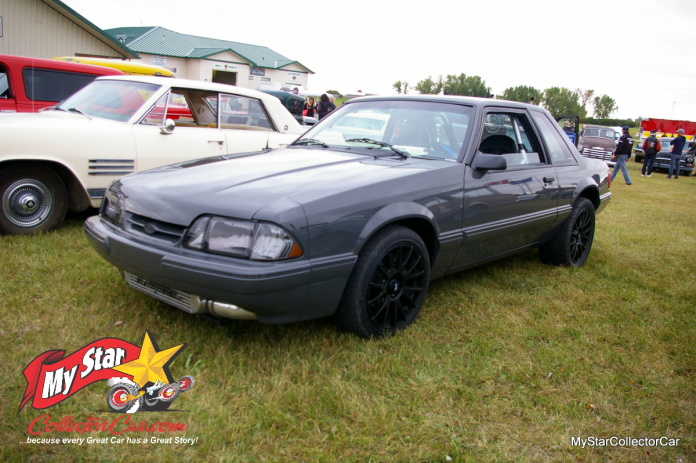 The Fox-Body Mustang had developed a loyal following over the years, mostly comprised of adult car guys who were impressionable kids when this generation of Mustang was king of the pony cars during the 1980s.

The Fox Body platform was developed by Ford to serve as a foundation for many of their models during the late 1970s and the trend continued during the Eighties.

Nevertheless, Greg wanted a Fox-Body Mustang and eventually purchased a 1989 Mustang in 2015. Greg had his ideal Mustang and decided to take the car in a radically new direction in terms of performance.

The process started with a controversial engine swap when Greg inserted a 427 LSX Chevy small block engine into the Mustang. Just for the record, an LSX engine can handle massive horsepower upgrades and Greg’s car now produces 1160 horsepower at the rear wheels.

The horsepower magic is mostly internal, but it is hard to miss the giant turbo booster on the Chevy engine, plus the free-breathing header and large exhaust dump at the bottom of the passenger front fender.

The engine’s 1000-plus horses are harnessed to a sturdy 4L80E Chevy automatic transmission that can handle the punishment from all those extra ponies under the Mustang’s hood. The movement back to the Blue Oval vibe occurred when Greg chose one of Ford’s famous 9-inch rear ends to transfer that monstrous power to the pavement.

The Leadfoot Grey paint scheme is also pure Ford and was used on the Hot Wheels version of his car gifted to Greg by his young son.

Greg’s choice to wedge a Chevy engine into a Ford Mustang stirred up a rivalry with the Blue Oval car guy crowd and the “Ford boys are on him all the time”, according to Greg, but it’s done in a good-natured manner by them.

There is a roll bar in the Mustang so MyStarCollectoCar had to ask Greg whether it was a track car. Greg said he has not raced his Mustang on a ¼ mile track because the roll cage is not yet certified — and his car would easily require a mandatory roll cage after any official track runs because of its speed capabilities.

The interesting part of the equation is Greg’s monstrous Mustang is street legal and registered for the road. Greg said he “can drive the car on the street and even get groceries in it”. However, Greg added “I keep my foot out of it”, a decision likely based upon the fact Greg has little to prove because the car is now sheer brute force in a Fox-Body Mustang.

Greg is keenly aware of his Mustang’s capabilities and knows the car would blow away the competition in a street showdown, but he is also a family man and wants to lead by example.

ALEXANDRA PAUL TALKS ABOUT CHRISTINE—THE OTHER FEMALE STAR ON THE SET...