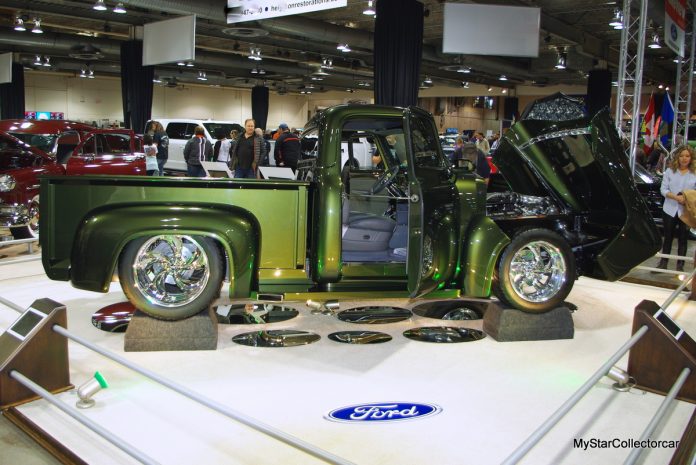 The Ford F-series pickup truck debuted in 1948 and evolved through 13 generations into one of the top-selling vehicles in the world.

The second-generation F-series Ford trucks were built between 1953-56 and were known as F-100s in their ½ ton form. The trucks were reliable workhorses on the job and provided solid performance at an affordable price for their hard-working owners.

The trucks also had a unique style with plenty of curves in the right places for their loyal army of car guy fans, so F-100 trucks built between 1953 and ’56 are a hot commodity in the hobby.

MyStarCollectorCar spotted a 1955 Ford F-100 at the Calgary World of Wheels car show last February and found out the very cool resto mod truck debuted at this event. The ’55 F-100 was purchased in bare metal by owner Bert Desrosier and underwent a five-year transformation into one of the most striking custom builds we have ever seen on a vintage second-generation F-series pickup.

The idea of a green-colored custom paint job is a risky prospect unless it is the right shade of green on the right vehicle-and Bert’s truck checks off both requirements in the paint color choice. The paint scheme is a perfect fit on the ’55 Ford truck and commands the attention of onlookers because green is definitely the right color for Bert’s beast.

As mentioned, the truck has undergone some major customization over the past five years, including a 3 ½ inch roof chop to give it a sleeker overall appearance.

The frame was purchased from a famous chassis builder and can handle the new performance direction taken by Bert during the build process.

For example, this F-100 now sports a monstrous 555 big block Chevy engine that churns out 730 horsepower, according to Bert. This big block is also a free breather because it runs through headers and a gated exhaust that eliminates the obstructions and ups the noise level ante upon request. The engine is hooked up to a 6-speed automatic transmission that transfers power to a beefy new rear end that was built to handle all that extra power.

The rear wheels required more meat on the bones, so the truck’s rear fenders were widened to handle the wider tires. The front end was transformed into a modern rack and pinion system based upon the famous Mustang II configuration made famous during the 1970s.

All that power meant a big braking system was needed to slow the F-100 down whenever it is taken on a high-speed run by Bert, so it now has giant four-wheel disc brakes to handle that angle. Incidentally, Bert likes the idea of driving his F-100 whenever the opportunity is available to him during future summer months.

The truck is now a fully loaded ride, complete with all the creature comforts that will make driving the F-100 a real pleasure for Bert.