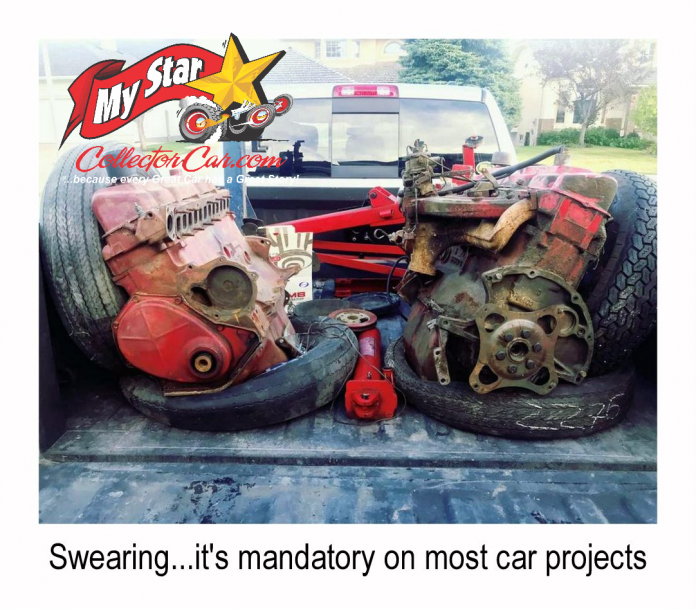 There is a G-rated quality inherent in the car hobby.

The participants are generally low key and easy-going types right up to the moment they are neither, largely because of circumstances beyond their control.

We at MyStarCollectorCar feel their pain and anger because we have also encountered automotive misadventures where “Dagnabbit” and “Consarnit” are simply not going to cut it. We know these two are solid examples of swear words in Huckleberry Hound cartoons and Bonanza episodes, but they won’t make the grade in angry car guy world. Since we are a G-rated online publication, we will not give a tutorial on profanity, but we will outline three of the reasons why car guys can swear with such efficiency when the spirit moves them.

One of the major reasons for genuine profanity is a tool or part that falls victim to the immutable laws of gravity and falls into a metal netherworld where it can no longer be seen and/or rescued from entrapment.

The missing car parts or tools will likely be a critical and irreplaceable component of a successful build and may even blow up other car parts if they fall into the wrong mechanical opening. The important issue here is how a car guy handles this misadventure, one that will begin with a generous dollop of swearing to celebrate the occasion.

Profanity will help the car guy vent some steam before he starts working on a solution to the problem. The bigger the challenge-the longer the bout of profanity one can expect from the car guy. For example, if car parts must be removed to gain access to the fallen part or tool, then expect a colorful array of swear words on the immediate agenda for the car guy. Then he will settle down and start to fashion a solution to the problem.

Another major reason for car guy spontaneous outbursts of profanity will be tool failure. There are two great reasons why bargain basement tools have an inexpensive price tag on them: they are garbage in cheap shiny plating, plus they will cause more heartache and frustration than a car guy’s first crush.

Cheap tools will either break during light to normal use-or round either the bolt or the nut when a car guy attempts to use them. They are imitation forged metal evil in a discount bin and should never find their way into a respectable tool chest.

The sole purpose behind crappy tools is to give the average car guy a solid reason to swear when they inevitably screw up a project with criminally cheap equipment.

The final nail in the coffin are cheaply built aftermarket automotive body parts that will not (or never) fit on a vintage vehicle. Rest assured the unscrupulous supplier shaved off every possible cost associated with the replacement product, one that was likely built with worn-out manufacturing equipment that is now only a vague approximation of the factory versions.

The average car guy will be able to give his library of profanity a great workout when he attempts to fit a square peg (cheap body parts) into a round hole (the vintage vehicle) and instead ends up fitting plenty of swearing into his speech habits.

The fine art of profanity is not lost on most car guys. In fact, swearing may be one of the best tools in their chest during a project because it’s a solid pressure release valve for anger and frustration inevitably encountered during a project.