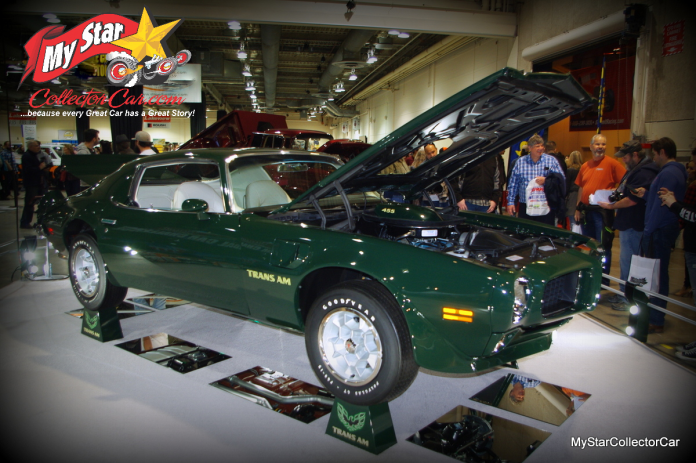 Doug Poffenroth remembers the first day he saw the Brewster Green 1973 Pontiac Firebird T/A back in 1980.

Doug crossed paths with the green T/A again but the hook was set for him on this classic ’73 Firebird. Ten years went by and Doug entered into married life with young kids and a new house so the ’73 T/A was off the table – but it was never forgotten.

He found the car and the owner was in a selling mood because he’d sat on the Poncho for years but now he was in “might as well sell it” mode. The best part was this ’73 Firebird was the same one he coveted years ago when he first saw it on the streets of Calgary, Alberta, Canada. Fortunately he took Doug’s 1200.00 offer because that was all he had to throw at the car.

The impulse buy created another issue on the home front because Doug barely had time to phone his wife and say, “ Honey, there’s a tow truck coming with a car and I need you to open the garage – I’ll explain it later”.

Doug said, “3 to 4 more years went down the road” but he took the time to take a picture of his two young boys in the front seat. The car was dismantled and that’s when Doug asked his neighbor if he could restore the body shell. His neighbor was a very talented body tech who worked for a large dealership and he had done some great restoration work.

His neighbor delivered some bad news after he stripped it down because Doug said the car “was in really rough shape and he could fix it over the long haul for lots of money”. Doug got creative and asked him if he could cut costs by helping on the job so every night around 7:30 pm he’d head over to his neighbor to help on the nasty side of the project. He’d bring his son occasionally.

They restored the body, painted it in his garage and the car sat for another 15 years. Doug’s stated goal was to drive it when he turned 55 and he realized he’d “turned 55 and he still wasn’t driving his car”. Doug said his business had done well and now he was at point where he could take this T/A to another level so he took it to a highly-rated shop to finish what he’d started.

The process required 3 donor cars and Doug was grateful for the purchases because they were not only part sources – they were blueprints for the reconstruction of a ’73 T/A body.

Doug’s body guy called him about one of those “we need to talk” conversations and he feared the worst but it was great news. He told Doug his research told him this Brewster Green T/A was incredibly rare and very few were sold in Canada and this was a Calgary car its whole life.

The verdict was clear – he recommended Doug “go all-in on this car”. The result was spectacular but Doug had very little time to react because he entered it in the World of Wheels so it was done on Wednesday and he drove it off the trailer on Thursday – a total of 45-50 feet.

The T/A scored high at the show and Doug’s game plan is to put it on the show scene while “it’s nice and crispy” then drive it in a few years. He wants to hit a few major Pontiac shows in the States then it will hit the real word – 3 parts cars, 22 boxes and countless hours later. Doug summed it up well.

“It took me on a journey before I even got to drive it”.