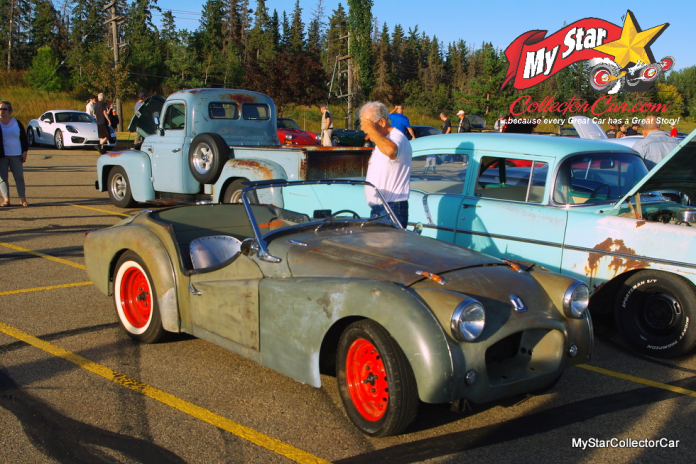 The Triumph TR3 is considered by its many fans to be the high water mark in British sports car style and coolness.

The iconic body lines of the Triumph TR3 were not lost on Graham Woolgar when he purchased his first TR3 in his late teens. Graham was in his early twenties when he sold his first TR3 to purchase an engagement ring for his future bride.

Graham never regretted his choice to sell his first TR3 because he invested in his future as a married man and was good with the decision. However, he wanted to own another TR3 at some point in his future and that opportunity presented itself in 2008 when a good friend sold him a 1957 TR3.

The TR3 required plenty of work and Graham was willing to put in the time to bring his car back on the road. The process took the next 11 years because Graham wanted to add a few upgrades along the way.

The former owner was able to assist him during the project and was well-versed in the history of the TR3 when he was its owner.

Graham upgraded the handling abilities on his TR3 when he added a rack and pinion steering system to the front end. He also added aftermarket four piston disc brakes that were more commonly used on Toyotas, so Graham relied upon his internet connections to figure out how he could install the brakes on his TR3.

The engine was transplanted from a 1959 TR3 and “bolted right in”, according to Graham. The car’s four-speed manual transmission is not fully synchronized so it requires some finesse to drop it into first gear. Graham was able to observe the proper shifting routine when the TR3’s former owner drove the car during some of the test runs.

Graham estimated he took his TR3 for about 8 to 10 test flights so he could “find out what falls off and what leaks”, in his words.

Graham chose to exorcise the Prince of Darkness electrical system in his TR3 so he ordered an aftermarket replacement system.  The TR3 has a dash-mounted kill switch lever that will shut off the power in the car. The car now has a turn signal added to the column, along with a vintage pre-war Ford steering wheel.

He also bolted down the fresh air vent in front of the windshield and put vent louvres in the hood; a move that might offend some purists in Graham’s opinion. Graham installed seat belts in his car and replaced the stock outside rear view mirrors because he liked the look of the new mirrors.