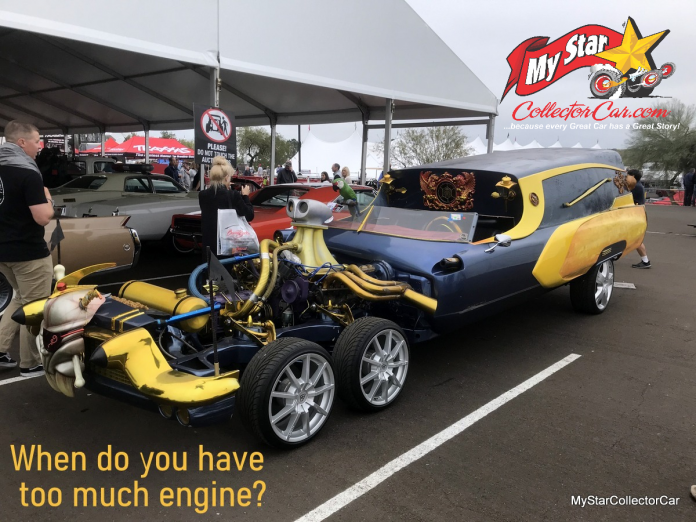 Not quite popular enough for us here at MyStarCollectorCar to actually watch it (then or now), but a blockbuster in every sense of the term.

Nicholson’s scripted outburst became a punchline for every scenario under the sun, so MyStarCollectorCar decided to apply it to the car hobby. There are car guy moments when the truth definitely hurts so we decided to illustrate a few of them.

An unspoken truth is any vehicle that has undergone a heart transplant and now sports an engine with an insane amount of horsepower under its hood. The concept of go-fast is not lost on us here at MyStarCollectorCar, in fact the need for speed is a fundamental part of the philosophy behind many resto mod builds we have covered over the past 11 ½ years.

However, there are builds where a giant modern engine has been shoehorned into a retro ride and the owner is forced to handle certain truths about their resto mods. The truth is the engine swap is only one of the components of a successful build.

Further to this truth issue is a project where the vintage ride still has its original front and rear end components. The old school engineering behind these components may be a poor fit with all that new horsepower.

More truth: there is no guarantee a vintage ride with a serious horsepower upgrade will track in a straight line under heavy acceleration-even if it has a factory differential that can handle a massive new herd of horses under its hood. Just for the record, modern road rockets have computer-controlled traction control that will compensate for the insane amount of power generated by new age engines.

A retro-fitted engine may even match or exceed the horsepower found in a modern muscle car, but it may not have the right checks and balances to prevent the driver from getting into a major jackpot when he or she lose control of their resto mod.

Which brings us to our final hard-to-handle truth: most drivers are not skilled enough to drive fast cars. Wanna-be racers can’t handle the cars when they attempt to pilot a vehicle that is well beyond their particular skill set.

There are many resto mods that are now fitted with muscular powertrains that, upon acceleration, will easily spin the rear tires at highway speeds. The immediate question is whether the average drivers can control a fast-moving vehicle that may kick loose at high speeds and severely test their ability to control it to avoid catastrophe.

The truth is we at MyStarCollectorCar are betting heavily on a potentially serious MVA because we do not believe most car guys have a Kevin Harvick trapped inside a mediocre driver’s body.