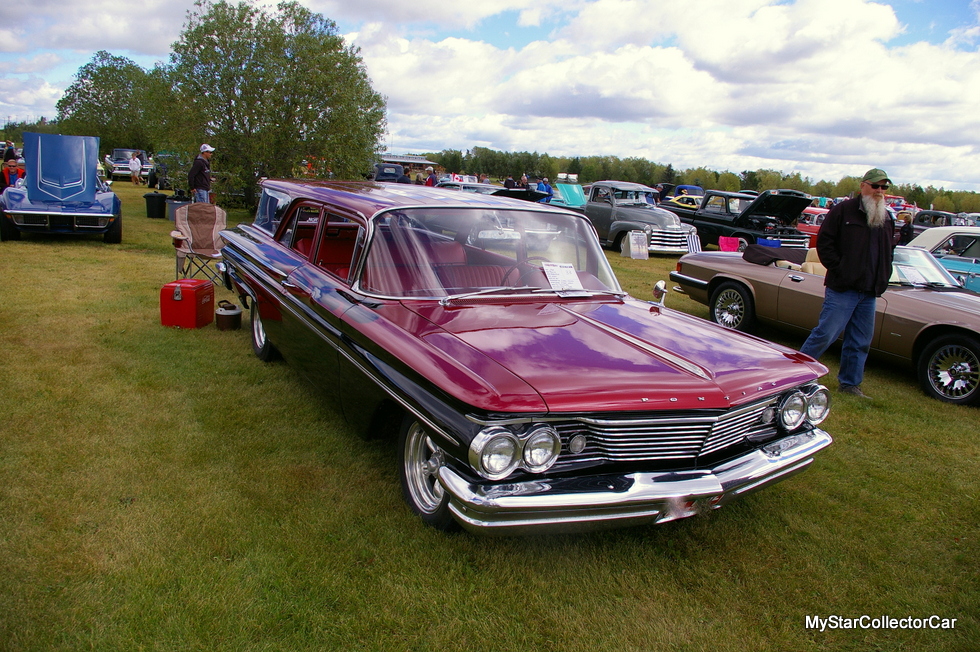 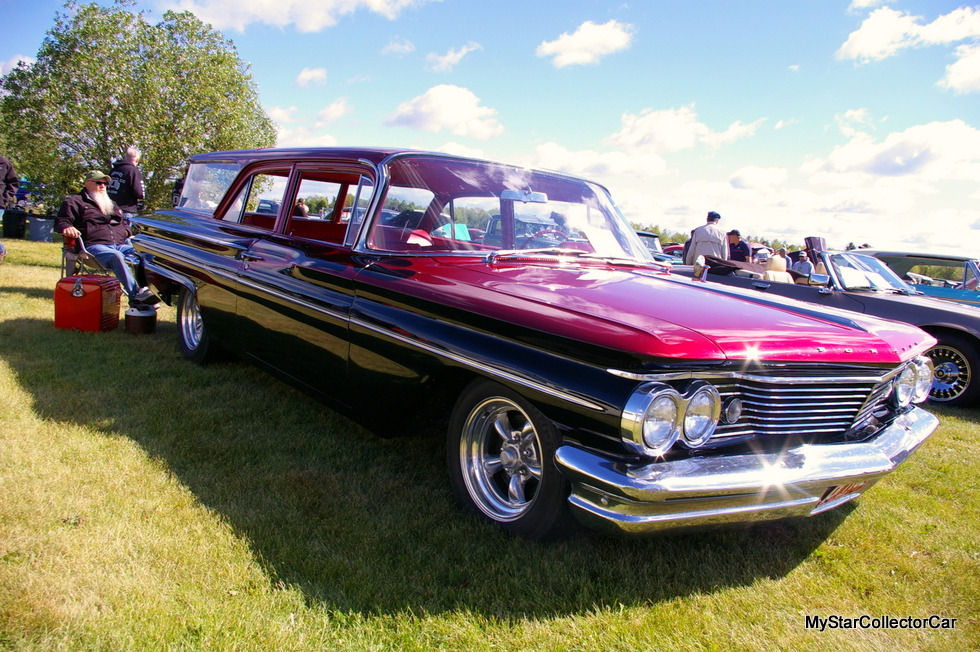 The Strato Chief was a Canadian-only model that offered an inexpensive two door station wagon choice for Poncho customers in Canada, according to Rod. 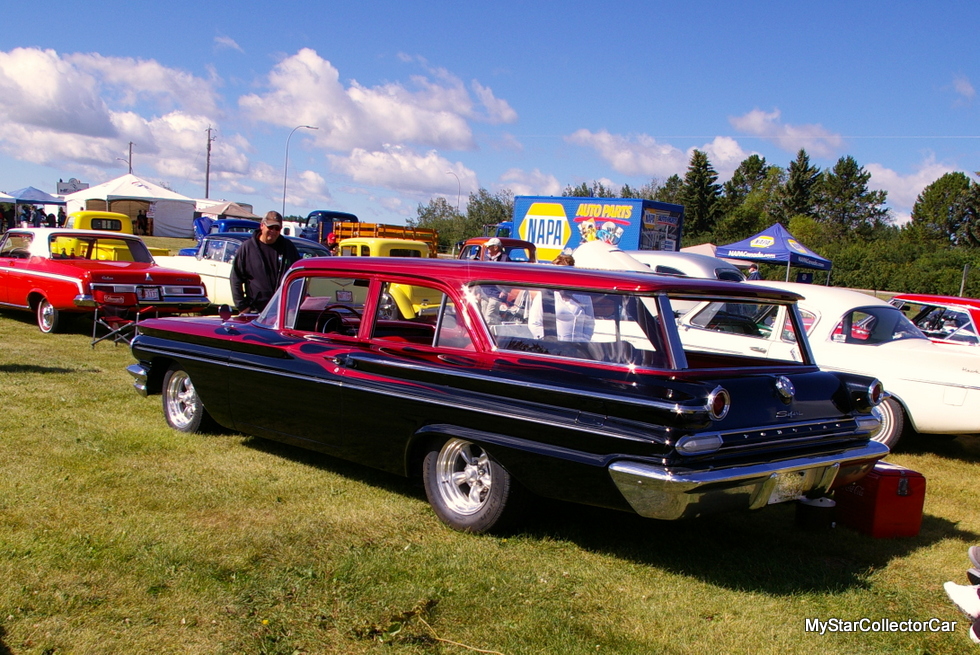 The stripped-down station wagon versions of the Strato Chief models were built to haul bigger grocery loads and more kids during their service years. The Strato Chief Safari wagons had few creature comforts, along with minimal trim-plus they even had lower tail light numbers (one on each side). 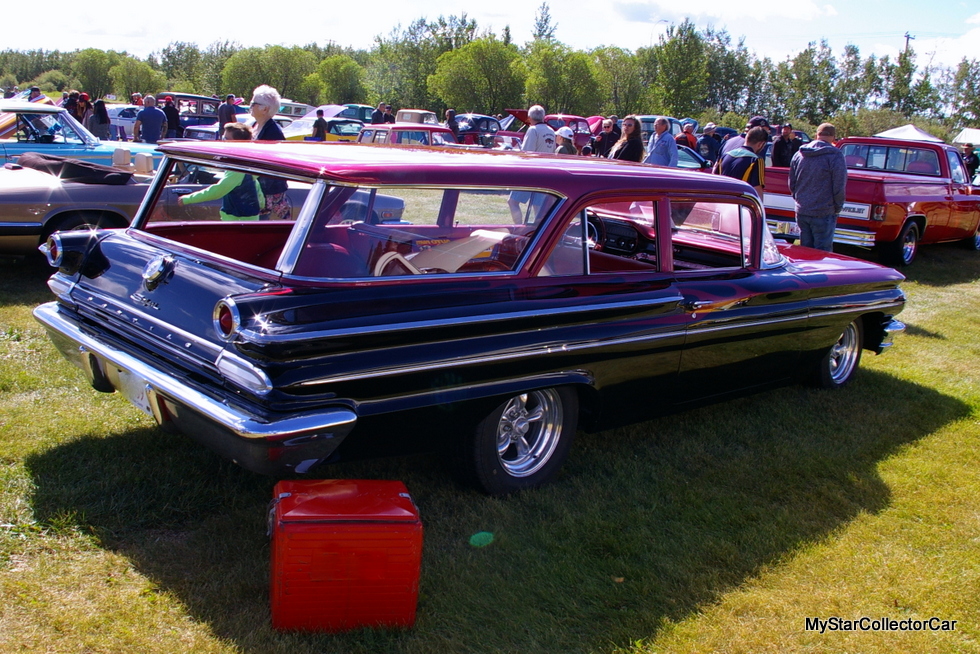 Rod was aware of his 1960 Pontiac station wagon before he purchased it because he worked with a young guy who had begun a major restoration on the car. Rod knew the car was a two-door version and assumed it was a smaller Pontiac model before he saw the Poncho wagon. 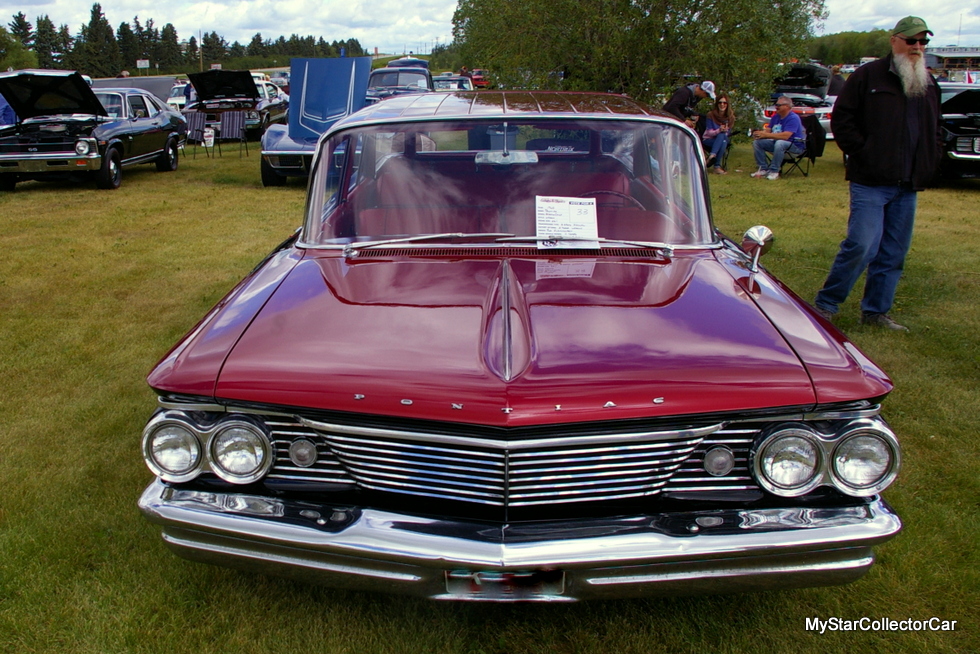 The previous owner wanted to save the Pontiac station wagon because of his connection to the original owner: his grandfather bought the car as a brand new vehicle.

The young previous owner wanted to restore the wagon with a custom paint job so he had a frame-off custom paint job done on the Pontiac. The chassis was even painted with a high end powder coating while it was separated from the body.

The process for a high quality build takes plenty of time and money. Eventually the young owner was able to complete the cosmetic component of the project with a local auto body restoration service owned by Trevor Comfort.

The results of the paint (by Jeremy Shipley) and body project were nothing short of spectacular-but the young guy did not advance the mechanical portion of the project and subsequently put the Poncho wagon into a long storage.

Rod kept track of the car because he worked with the young owner and eventually Rod was able to purchase the Pontiac Strato Chief Safari from the kid. 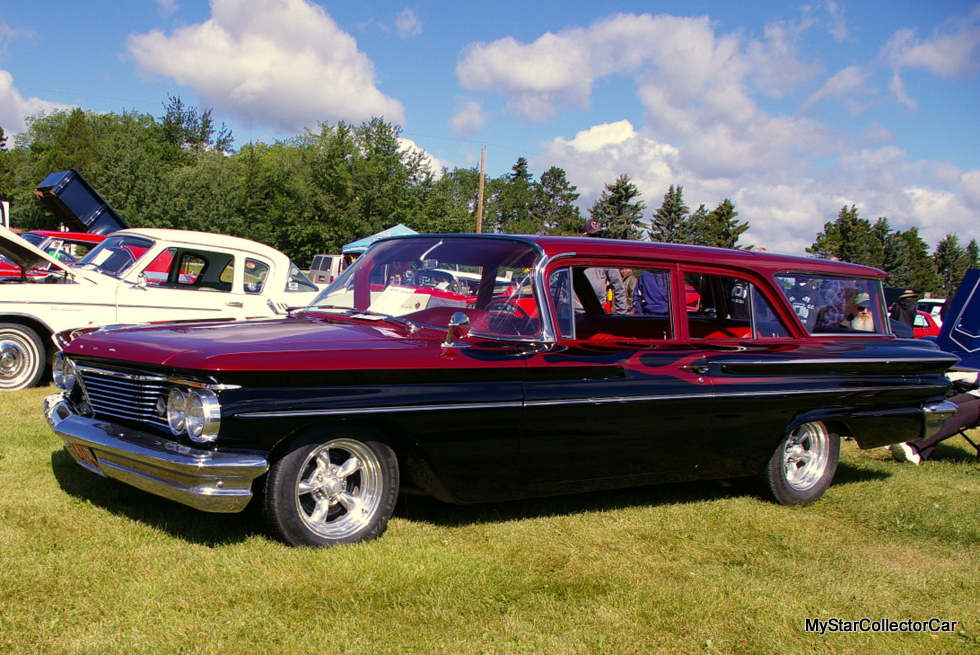 The car was “bought as a shell” according to Rod. The Pontiac wagon had no glass, interior, or power train when Rod purchased it, so he had plenty of work ahead of him to get it back on the road.

Rod also had three parts cars thrown into the sale because “you gotta have a lot of parts cars to build one”; in his words. A Canadian-only 1960 Pontiac has few aftermarket choices for owners because the Canadian Pontiac station wagons were not built in abundance and were a different car from the American Pontiac models at the time.

Rod loved the custom paint job on his car and decided to run Pontiac’s basic six cylinder engine/3-speed manual transmission in his wagon. However, Rod did convert the original three-on-the-tree manual shift configuration to a three-on-the-floor system. 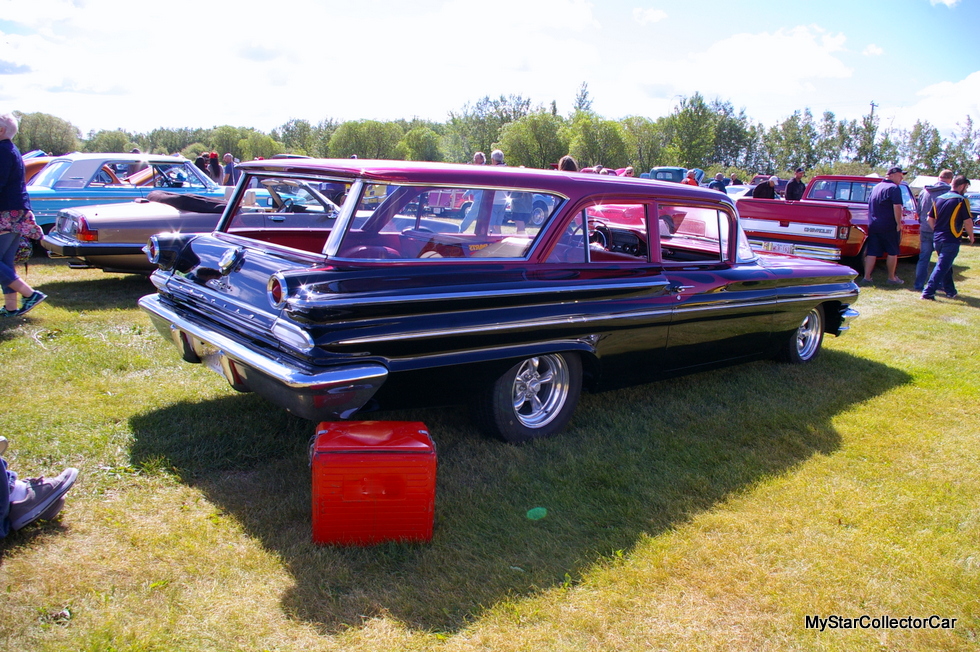 Rod also installed the interior of the car (including the headliner), plus he installed a dual master cylinder to handle the stock drum brakes on the Pontiac wagon. 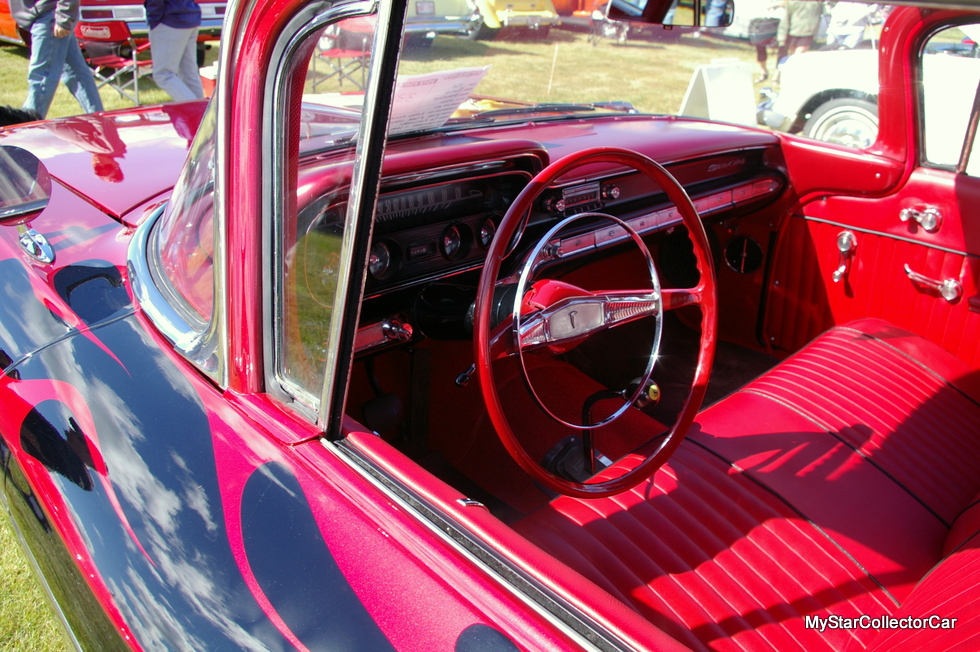 Rod described the car as “very original-other than its lower stance, wheels, and custom paint job”. He and Dawn can now enjoy time on the road in the car after its June 2018 completion. 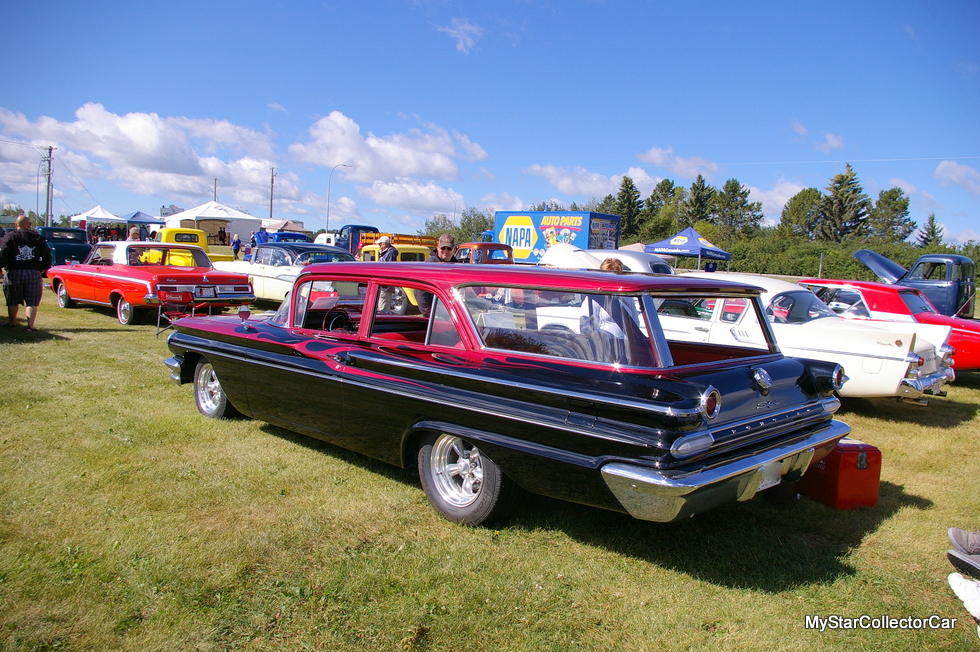 The car is easily able to cope with modern traffic with its retro power train according to Rod-a good situation because the happy couple plan to put plenty of miles on their 59-year-old station wagon on future trips.

MSCC DECEMBER 1 “WHAT’S IT?” WEDNESDAY—SOLVE A PUZZLE TO START A...