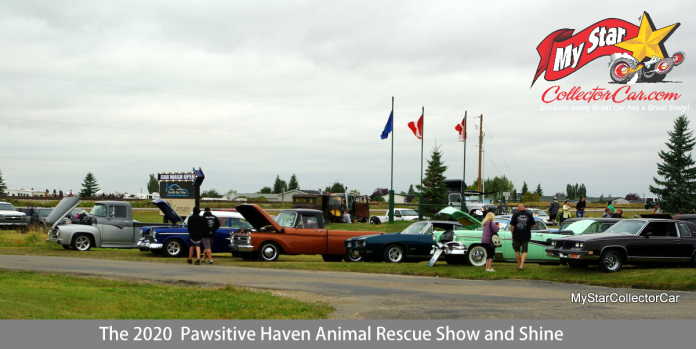 The topsy-turvy nature of the 2020 car show season continued since most shows were called on account of the plague, but MyStarCollectorCar has been fortunate enough to attend a few events, including the Pawsitive Haven Animal Rescue Show and Shine.

One of the day’s highlights occurred before MyStarCollectorCar even arrived in Carstairs when we photographed and conversed with the ultra-talented 89-year-old owner of this stylish car he created during a 17-year build process.

The car has been a huge part of his life for many decades and its complete story will be told in the near future in a MyStarCollectorCar feature.

A 1971 Dodge Charger RT was a guest of honor at the show and sported a vintage ‘71 440 6-pack setup that was a notch above its factory four-barrel carb, but the 440 and 727 tranny in the car were factory all the way.

Learn all about this stunning Mopar muscle car’s history in a future MyStarCollectorCar story.

There were also wild beasts at the car show, including this 1989 Ford Mustang with a new bad attitude installed under its hood. The car was track-capable and street legal, although its owner had not yet raced it on the track to see whether the Mustang’s 1160 horsepower at the rear wheels would blow away the competition. Our best guess here at MyStarCollectorCar is a confident “Yes”.

Look for the ’89 Mustang’s complete story in a future MyStarCollectorCar article.

This era of Mustang was known as the Fox Body version, but the term was not the exclusive domain of the famous Ford pony car because the Mercury Zephyr was also built on the Fox Body platform.

A 1980 Mercury Zephyr station wagon was also at the Carstairs show and it was not a typical 40-year-old Ford wagon in any sense of the term. This raging road beast made a major journey from practical grocery-getter to field car, to bloodthirsty mechanical beast over the past four decades and now hides plenty of menace under its unassuming exterior.

The best way to find out what happened over the ensuing 40 years will be found here at MyStarCollectorCar when we run the story behind this formerly tame wagon in a future feature.

Here’s an appetizer for MyStarCollectorCar readers: the 1980 Zephyr and ’89 Mustang now share more than their Fox Body roots. They now boast powertrains that are sure to provoke a few heated car guy debates.

The final piece of the puzzle for our MyStarCollectorCar dog and car show was a survivor 1964 Buick Wildcat four-door hardtop that had a long legacy with its first owner. Its current owner loves the car and drives it whenever he has an opportunity to hit the road, including the Pawsitive Haven Animal Rescue car show about 40 miles (66 km) from his home. Look for the stylish ’64 Buick’s story in a future MyStarCollectorCar article.