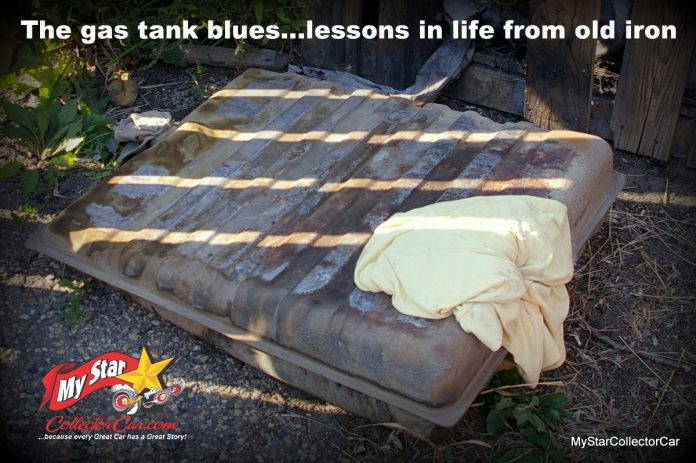 There is no better way to see the world than through the windshield of a vintage car because every view is a view down memory lane.

I did some crowing about a successful 1000-mile road trip in a 1963 Plymouth this past summer, mainly because it was indeed a trouble-free journey. My cockiness was at dangerously high levels after my return, so I took the car on another road adventure and naturally assumed nothing would happen on the trip.

I was about 40 minutes into the journey when the car started to buck and sputter on a hill, a strong indication it had a fuel starvation issue. Fortunately, I was able to nurse the car home in what can only be described as prehistoric limp mode, given the car’s advanced years, but I made it-and the only casualty was my cockiness regarding the car’s ability to handle a road trip without mechanical breakdown.

I was right about the fuel starvation issue, so the only question was how far did I want to take the repair process? My previous experiences with this problem pointed directly at a clogged fuel filter as the most immediate issue, but history had taught me one important fact: a dirty gas filter was likely not the only issue.

In my case, it was not the only issue because the engine’s mechanical fuel pump was also a possible culprit, so I installed a new one on the car. I mentioned (in another previous article about the old Plymouth) the car’s 318 LA engine was donated by an ’86 Chrysler Fifth Avenue, so another fuel pump was readily available.

The only difference was the location of the intake on the new fuel pump, but it was not a deal breaker-unless you are a mechanical moron in a hurry and do not use a long enough rubber fuel line hose to connect the replacement fuel pump to the gas line. I am that moron.

I was able to connect the original fuel line to the fuel pump but failed to notice the kink in the rubber line concealed under the pump until I took the car on a shakedown and once again encountered a fuel starvation issue on the first convenient hill.

I limped the car back to town after a long series of start-stops and filled it right to the brim with gas. That foolish plan reeked of desperation and eventually I was forced to wait five hours for a tow truck that was supposed to arrive within 10 minutes of my last slightly angrier phone call two hours after I made my first call. However, my call was not particularly important to them and went way down the list after they received a series of higher priority police calls. It was valuable information to a guy who turned down a ride home because I seriously believed the tow truck people and their towing association. The entire towing fiasco taught me The Who were right because I won’t get fooled again.

I finally got the car home late that night and ordered a new gas tank the next day because I wanted to eliminate the last possible issue in the fuel delivery system- even though I wisely put a longer fuel line hose on the engine and eliminated the kink.

The new tank allowed me a golden opportunity to siphon a full tank of gas out of the car before I replaced the old tank. I tried two siphon pumps from a well-known Canada-only retail automotive store–neither of which were better than an old school siphon hose favored by juvenile delinquents from a bygone era.

Eventually I emptied the old tank using the tried-and-true siphon hose and installed the new tank. I noticed the rubber hose between the new tank and the fuel line was badly deteriorated, so I replaced it with a slightly shorter new hose.

The “slightly shorter” angle was an extremely critical factor because it leaked fuel at a generous rate when I refilled the tank. Consequently, I had to immediately replace the line with a longer one so the car would not become a giant fireball and the grimmest definition of a hot car.

The only conclusion here is I am still a mechanical moron who ignored critical rubber fuel line length and paid the price because size really does matter.