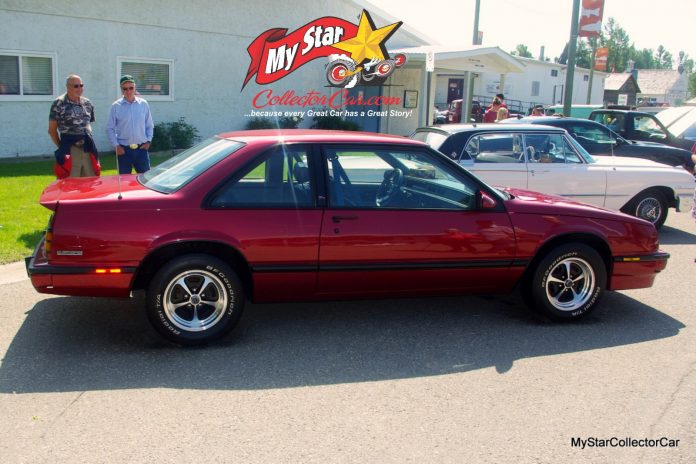 The mid to late 1980s was an era when Detroit figured out how to squeeze more power out of an engine and still fall within the strict rules of state-issued mandates.

Bruce Temple was on his way to a dealer because he said he, “blew up the wife’s motor”, so he spotted a 1988 Buick T-type sitting on the lot. Not many guys could turn a disaster into a win, but Bruce made a strong case for a new car by blowing up his wife’s old car. His negotiations earned him a lifetime car buddy.

Bruce always had a fondness for the Monte Carlo’s short-deck, long hood profile, so this 80s version of that look really appealed to him. The Buick T-type became his daily driver, so it saw winter driving–but he always parked it in his garage. Bruce wondered why he’d own a car that “took up half the garage” after he took it out of daily driver duty, but he never regretted the decision to keep the T-type.

The Buick was on a few long road trips—including a run to the Yukon—but over the years Bruce kept the mileage down to around 72,000 miles. Despite the care and attention to maintenance the car received over the years, Bruce wanted to take it back to the way it was when he drove it off the lot back in 1988.

Bruce had the engine and transmission rebuilt even though the Buick was still running great, because he wanted to assure himself the car was reliable. He even bought a donor car because his Buick had a few problems he couldn’t solve at the local Buick parts department. The driver’s door assembly was broken plus the front air dam and rear spoiler needed to be replaced.

The front air dam had taken some hits over the years and the rear spoiler split so the parts car was a goldmine for Bruce. Fortunately, he didn’t need the rare T-type trim pieces on the C-pillar and the rear quarter, because his were still in great shape.

Bruce also had the Buick painted in its original factory color because he wanted the car to look like it did in 1988. He’s happy with the results, but the 1700-dollar tab for a new windshield was more than he thought he’d pay thanks to its unique configuration and electrical accessories.

The interior is mint, but the headliner sagged a little because of the heat, so he is going to address that issue. The cassette player still plays tapes, so Bruce definitely has a time machine back to 1988.

The Buick sees light duty these days because it’s literally a Sunday driver to church. Bruce does some local runs and hits a few cars shows and he’s happy with the 30-plus miles per gallon, plus the car still runs like a champ.

There’s only one condition with the Buick—he’s the only driver. He had a terrible experience years ago when he lent out his ’64 Pontiac so he doesn’t let anyone drive the T-type.