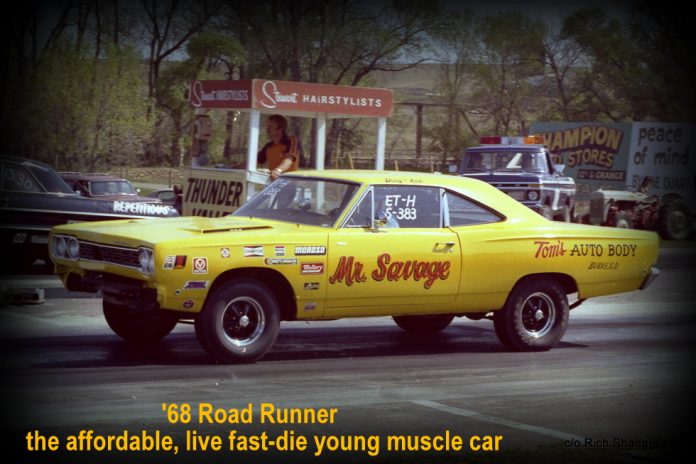 Plymouth was a name that inspired most of its customers to purchase a practical car that was free from the burden of excitement-give or take its close association with the Fury, Petty or Hemi legacy under its watch.

Plymouth changed that game in 1968 when the Mopar marque introduced the Road Runner model and answered this burning question: Who was the fastest kid in high school?

A barebones 1968 Plymouth Road Runner was priced around 3000 dollars and worth every penny of the investment. Plymouth started with a two-door sedan (called a post model because of the roof pillar between the front and back seat), threw in a 383 cubic inch engine that officially pushed 335 horsepower, and included a 4-speed manual transmission on its meager standard equipment list.

The basic 1968 Plymouth Road Runner did not have a radio, nor did it have carpet, because this B-Body Mopar was called “a poor man’s hot rod” in car guy circles, although nearly 20% of its buyers were high school kids.

The 1968 Plymouth Road Runner was equipped with bench seats (front and back), dog dish hubcaps, along with the famous Beep-Beep horn that became a fundamental part of the car’s legacy. Perhaps the young buyers remembered the horn sound from the Saturday morning cartoons because they were not exactly far-removed from that particular TV experience for kids.

The Warner Brothers cartoon bird and the affordable Plymouth sedan may have sounded the same when the owner hit the horn, but it was a completely difference experience when the car’s driver hit the gas.

There was always a distinctive exhaust rumble associated with the famous Mopar 383 big block. The sound grew much louder when gas pedal met floor metal (or plastic non-carpet standard issue floor cover) whenever its young owner decided to cast his fate to the wind and attempt to outrun the cartoon bird in terms of overall velocity.

The difference was the cartoon Road Runner could stop and turn on a dime while the automotive version was a straight-ahead accelerator that did about as well as Wile E Coyote’s insane rocket creations in the curves.

The predictable result was a very fast quarter mile car that combined brute force with about 30 seconds of its owner’s driving experience to make the first long and winding road the last one for its young driver.

Nevertheless, the ‘68 Plymouth Road Runner became an instant star when it debuted during the muscle car wars of the late 1960s. The car crushed Plymouth’s stodgy image because it was an affordable road rocket that was well within the reach of any kid with a part time job at the local supermarket or gas station in 1968. The young buyers were able to purchase instant coolness when they bought a 1968 Plymouth Road Runner.

Common sense and sane driving habits were not included in the package.