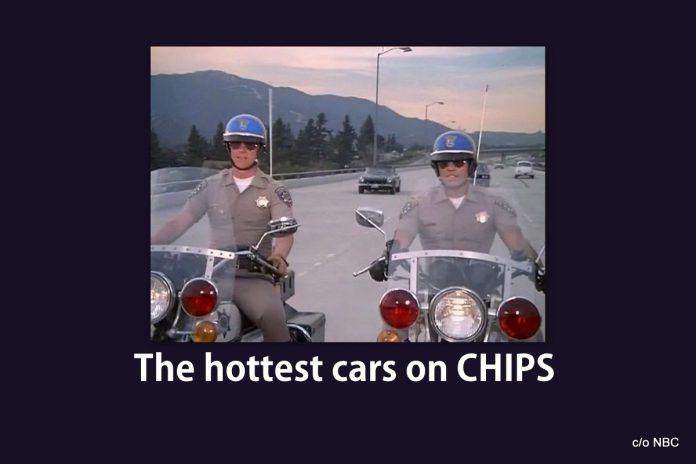 CHIPS was a police drama that ran from 1977 to 1983—it featured two CHP motorcycle officers (Ponch and Baker) patrolling the freeways of Southern California.

Bear in mind, most CHIP civilian cars were used sedans, wagons, and other less costly cars, because muscle cars cost more—even in the 70s.

A ’71 Pontiac Safari was a lot cheaper.

There was a tricked-out, track car ’70 AMC AMX in the fourth season when the Chippies decided to hit the drag strip.

This AMX wore all the period AMC red, white, and blue paint—the plot had Ponch saving the day with the CHIP track car.

’66 Rivs were cool cars, but this one was turned into a parts car after a run-in with the CHP.

There was a built ’71 Camaro in a fourth season episode.

Camaros were still free breathers in ’71, so when Bonnie (female Chippie) was in pursuit–she had her hands full in 1981.

A Corvette made an appearance in Season Two—surprisingly one of few Vettes in an active role on CHIPS.

That’s probably because Vettes—then and now–held their value a lot more than a ’76 Pontiac sedan. This one was a movie stunt car, and it gave the guys at CHP a big headache.

There weren’t many Mopars in the show—beyond the heavy-duty police cars, but a 1966 Dodge Coronet convertible made an active appearance in a Season Two episode.

This one had a horrific ending on a freeway after tangling with several vehicles.

There were several 60s and 70s era muscle cars in a Season 4 episode but one of the featured chase cars was a ’69 Mustang Mach 1 done with traditional 70s custom touches.

Flames, high-rise hoods, and trick exhausts were built into this iconic pony car, so it was a genuine piece of history.

A 1973 Pontiac Firebird Trans-Am made an appearance in a Season 6 episode.

This Poncho winds up in a chase scene after which it comes out a lot worse for wear—in the 80s a ’73 T/A wasn’t worth much more than duty as a stunt car in a TV series.

There’s another Pontiac—a ’67 LeMans convertible in a Season 4 episode.

The final sacrificial lamb on the CHIPS show was a 1969 Camaro RS convertible seen in a Season 3 episode.

This was the early 80s–so despite the outcry from today’s Camaro guys, this one was sacrificed to the TV gods because at that time a ’69 Camaro RS convertible was a pretty old used car.