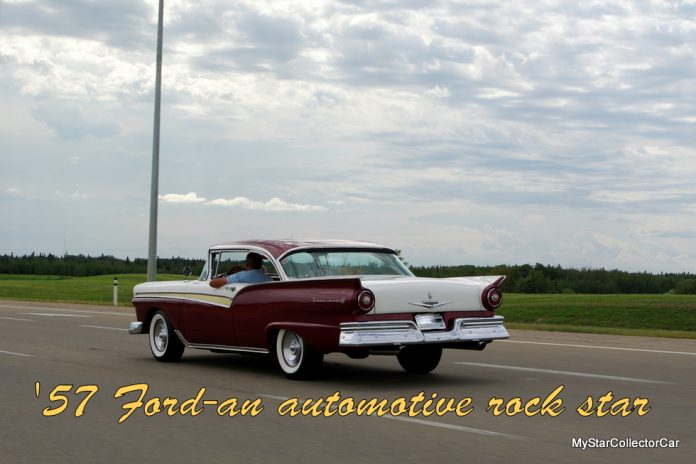 There are few among us who will dispute the superstar status of the iconic 1957 Chevrolet.

Maybe Dinah Shore’s musical plea to “See the world today in a Chevrolet” in her famous 1950s ads had its desired effect by ’57.

Except for one important detail: The 1957 Ford outsold the 1957 Chevy by a significant number. However, the enduring legacy of the ’57 Chevy is still a strong force in the car hobby, while the ’57 Ford gets parked in the large shadow of its GM rival in 2019.

Nevertheless, the debut of the 1957 Ford was a big event 62 years ago because this model was a radical departure from the ’56 Ford and consequently offered some radically different models.

The introduction of the 1957 Ford Ranchero was the first car/truck hybrid built by one of Detroit’s Big Three (GM, Ford and Chrysler) and this wild-looking vehicle created a big wave for the Blue Oval boys. The Ranchero gave Ford a racer’s edge over its competition in 1957 and forced GM to build the El Camino in 1959.

The second new addition to the 1957 Ford lineup was the Skyliner retractable hardtop convertible. These unique cars offered metal roofs that slid into the trunk when the owner chose to change it from a tin roof car into a no-roof car.

The engineering behind the retractable roof Fords was nothing short of insanely complicated because it was a mass of cables and electric motors that were prone to breakdown. None of the other Big Three members chose to imitate the Skyliner models, so Ford had this field all to itself in 1957.

The third reason for the 1957 Ford’s success was its new body style. The car underwent some major cosmetic surgery that was completely different from the 1955-56 Fords. For example, the rear tail fins on the ’57 Ford had a sharper edge along the top of their horizontal ridges, while the front headlights protruded from their bases.

The overall stance of the ’57 Ford was the fourth reason for its success because the car was lower, longer and wider than its predecessors. Ford tinkered with the frame to ensure the new engineering retained the creature comforts for its passengers while lowering the car compared to previous Fords.

It was known as the “cowbelly” frame in Ford circles and allowed a lower roof with no compromise in interior height for passengers. In fact, rear passengers actually gained space compared to the ’56 models.

The ’57 Ford also got closer to the ground because it rode on 14-inch wheels while the ’56 Ford rode on 15-inch wheels.

1957 clearly marked a new direction for Ford because they wanted a car that was more aerodynamic than its predecessor-and its competition. The United States was locked in a space race with the Soviets and the Rocket Age was not lost on Detroit design and engineering.

The fifth and final addition to the ’57 Ford legacy can be found in its power options because Ford offered everything from mild six-cylinder engines to barely legal fire-breathing 312 cubic inch supercharged  monsters that were more at home under the hoods of Ford’s race cars than a street car.

The net result was a car that had an Elvis-like debut with its public in 1957 and set the automotive world on fire 62 years ago because of its innovative approach to new Fords that year.