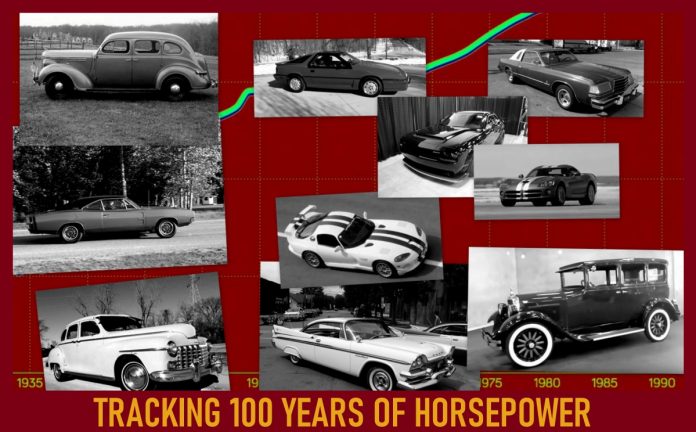 Here’s an obvious statement—cars have changed a lot over the last 90 years.

That’s like saying the sky is blue, but to really drive this point home you need only focus on the difference in top speed from 1928 to 2018 using every decade as a yardstick.

The four-cylinder Fast Four (last year for the 4-banger) was 212 cubic inches of raw horsepower (forty) that pushed a ’28 Dodge to a sparkling 65 miles per hour—on a good day with a tailwind.

Fast forward ten years to 1938 when Dodge was firmly onboard with 6-cylinder engines and it showed.

World War II slowed things down but by 1948, the Dodge enjoyed another upgrade.

The 230 cubic inch, 102 horsepower was a beast compared to earlier versions, because a ’48 Dodge could hit 85 miles per hour, so the extra 10 years of technology meant 10 more miles per hour.

Things really soared ten years later because it was the Jet Age so the ’58 Dodge was in another stratosphere.

The D-500 was a tough act to follow, but the Hemi 1968 Dodge RT meant the mission was accomplished.

The 426 hemi was rated (very conservatively) at 425 horsepower so the legendary ’68 Charger hit an incredible 150 miles per hour—the ’58 Super D-500 was confined to the past.

Things changed dramatically in the 70s, because smog laws choked the life out of engines, but Dodge countered with the ’78 Dodge Magnum.

The 1980s brought better technology to the party and it came in smaller packages, so the 1988 Dodge Daytona Shelby Turbo Z became the ten-years-later successor to the Magnum.

Carroll Shelby never knew the meaning of the word slow so he took a 4-cylinder, 134.6 cubic inch engine and made it a 174-horsepower beast that could hit 148 miles per hour—welcome back 1960s—that’s Hemi Charger territory.

Ten years later, Dodge built the 2008 Viper SRT and all bets were off.

This was a 512 cubic inch, 600-horsepower, V-10 monster that could hit 202 miles per hour—Dodge officially hit insanity in top speed.

This brute-force beast came with a 376 cubic inch, Gen III hemi packing 808-horsepower and it hit 211 miles per hour.

AN UNSOLICITED HEADS-UP TO ‘GENERATION NEXT’ IN THE CAR HOBBY