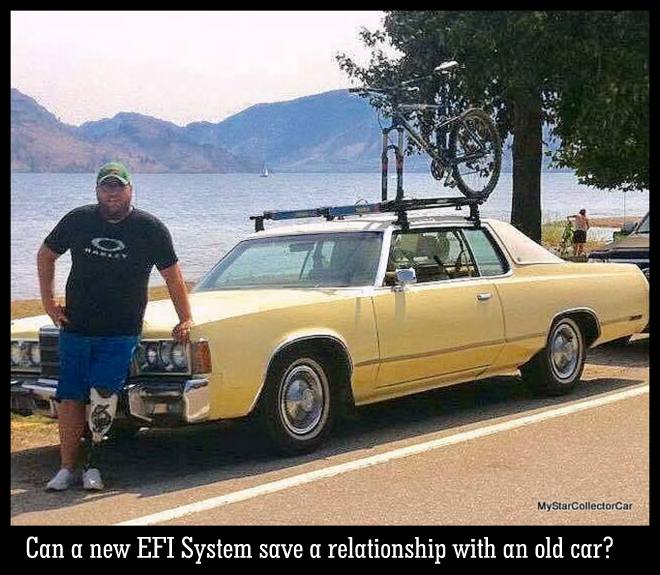 Thelma is a member of our family.

She’s the two-door model with the Chrysler 400 cubic-inch engine. 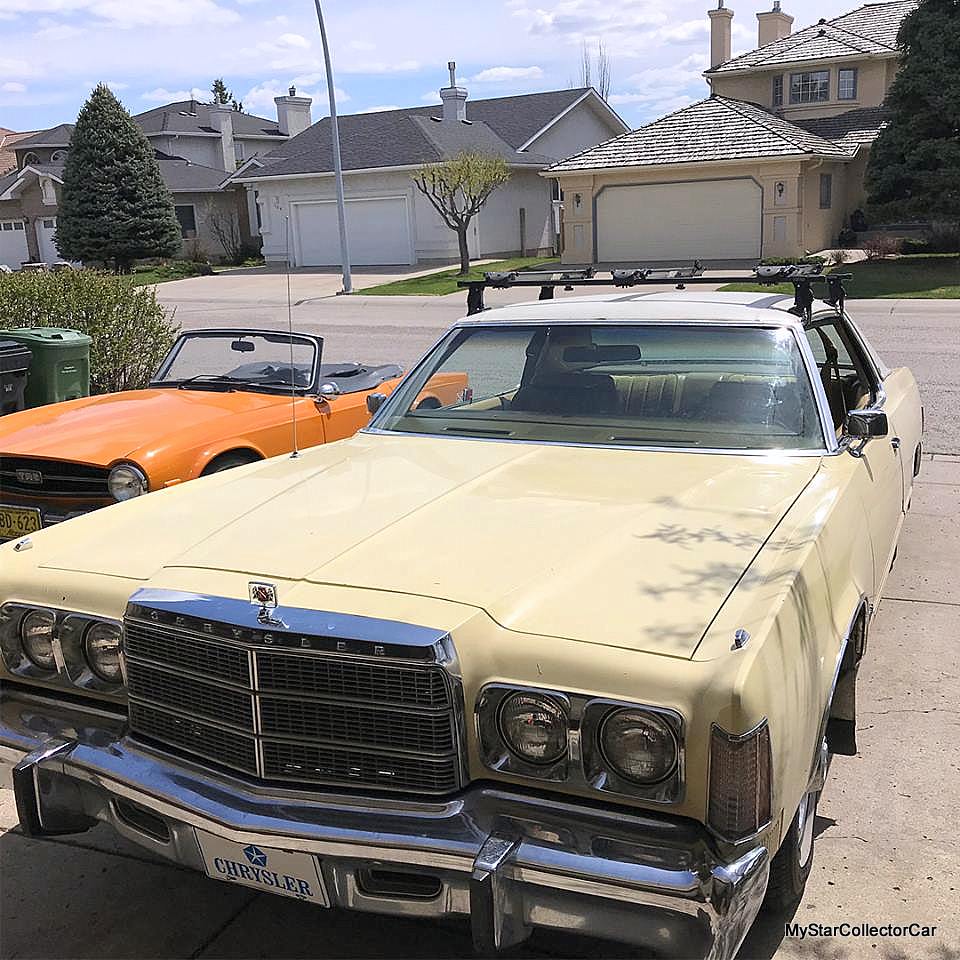 She’s named after Thelma Houston who had the 1977 hit “Don’t Leave Me This Way” – my wife named her that – she has bonded with the car. Over the last four years we’ve used her as a fly-in and drive car at my in-law’s vacation property in  British Columbia. But they’ve sold that property so last fall I flew out and brought her home.

Thelma isn’t perfect. She’s got some questionable bodywork in her lower quarters that predates our ownership. She drops a little oil. Her vinyl top is a little ratty but worst of all she was born as a Lean Burn car. I know. What can you say about the fiasco that was the Lean Burn Engine Control System? 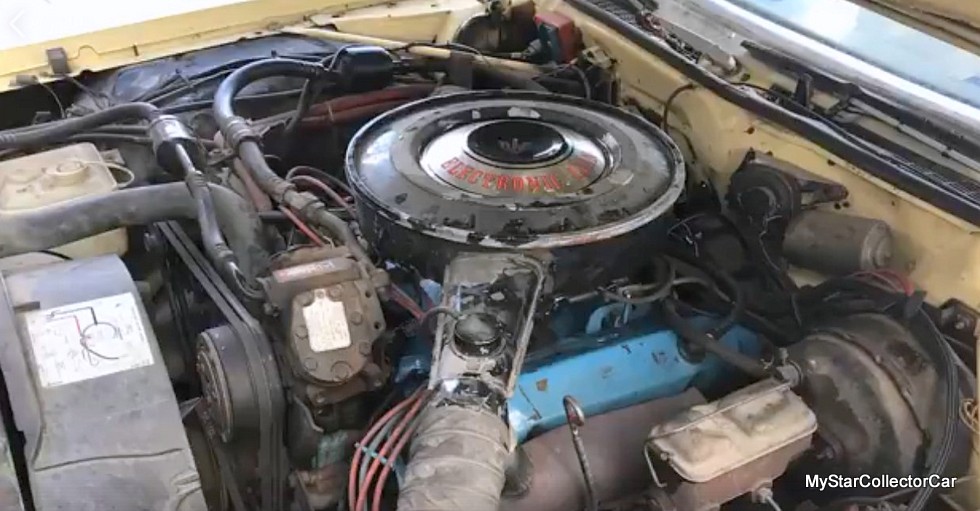 If you’re not in the know, the Lean Burn System was the start of the computer age for cars but it wasn’t a great start. The system was designed to take vacuum, RPM, coolant temp and throttle position as inputs and adjust spark advance accordingly. When it worked – it worked well. But bolting a 70s era computer to the side of an air cleaner assembly worked as well as you’d expect. Most of the early systems had short lives and were removed in favor of a traditional vacuum advance distributor. That’s what happened to Thelma before I came into her life. She had this crude conversion done and has lived like that for, I expect, at least, the last 30 years of her life if not more.

Thelma is still sporting her original thermal quad with no vacuum port for the distributor. Vacuum for the distributor is pulled from the manifold. I suspect this is less than ideal and I think this franken-mod (Lean Burn carburetor with non-Lean Burn distributor) has contributed to Thelma’s personality quirks. 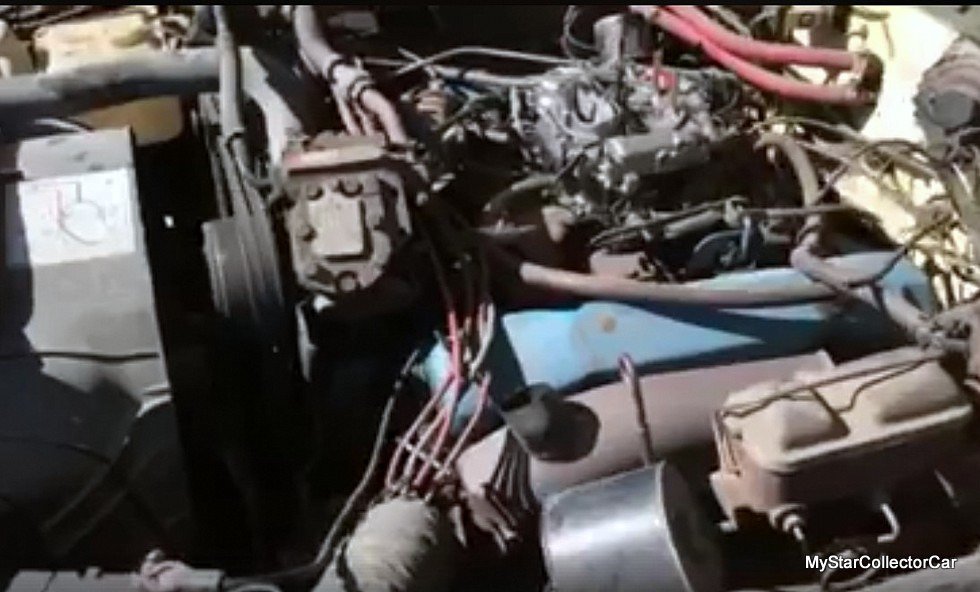 Thelma has never failed to start but she has failed to accelerate when needed. When you stomp pedal one of three things might happen and only one of them good. If you’re lucky she’ll just cough, hesitate then go but sometimes she’ll stall – especially when accelerating from a stop. She also might stall on a steep incline and she’ll definitely cough when you stomp on the pedal to pass slower traffic. These are some rather annoying personality traits for such an elegant car. 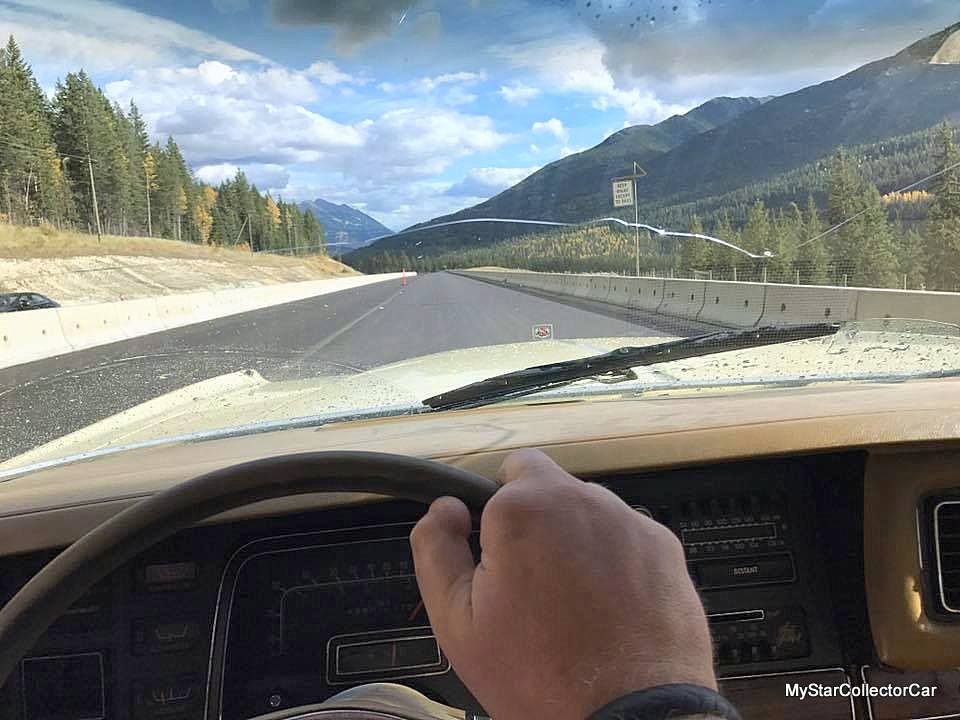 Last summer I replaced Thelma’s carb with the same part number. In retrospect I should have put an earlier version on the thermo quad with a vacuum advance port. But I’m not a bright guy. I’m what I call “an eventually bright guy” – eventually I figure everything out but never before I do the wrong thing at least once first.

Right now,  I have a print off of a thermal quad manual on my desk. I have read it front to back plus I also have a new electronic tool that measures dwell in my toolbox. The point is that I have devoted a lot of thought, time and money to this problem to little avail so after more time thinking about it I’m going to devote more money to Thelma.

Thelma is going to get an EFI kit. Specifically I bought the EFI kit for Thelma. I haven’t done any research on this but I am pretty sure is she’s going to be the first 1977 Chrysler Newport to have an EFI system installed. I could be wrong but I don’t think so.

This plan started in earnest a couple weeks ago, when it looked like I was going to need room in my garage to store some expensive stuff overnight for my day job as a computer geek, I moved my Triumph TR6 outside to make space. After a few days I noticed that I had room enough to maybe move Thelma, who spent her first winter in four years outside under a car cover, in for a little tuning. I knew at the very least she had a rear seal leak.  There are few repairs that have a higher failure rate and are also a bigger pain in the ass than fixing the rear seal on a Mopar. So I figured I’d tackle that because I’m a glutton for punishment and with that “while I’m here I might as well also…” kicks in. Within a few days I had four different parts orders for Thelma. 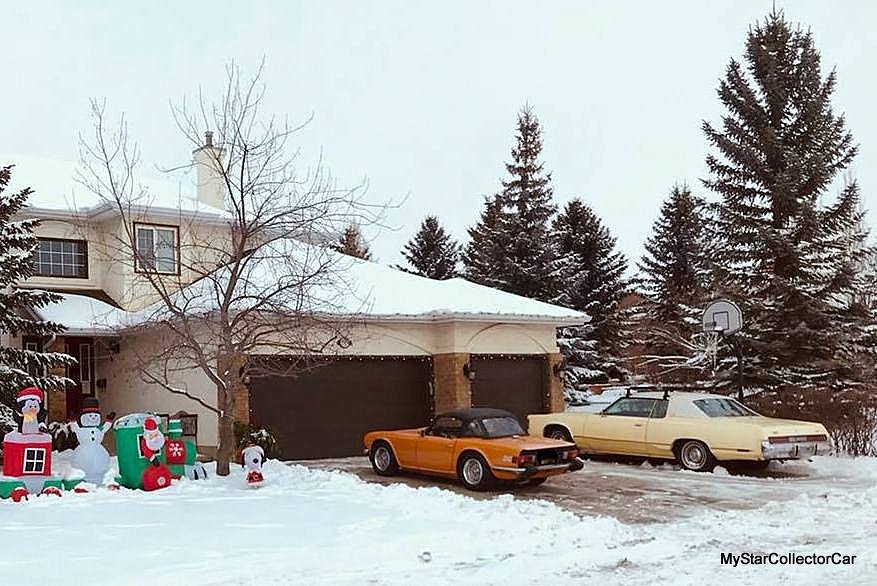 Can you see how this quickly got out of hand?

I have no excuse for this. I have a major car project on the go that is not Thelma or my Triumph and it should get the bulk of my attention. Thelma is just supposed to be cheap fun.

The problem is when you start working on Thelma it becomes really apparent, really quickly that she has been loved. Whoever had her before us took care of her so there really isn’t anything wrong with her other than she probably had a valve cover leak since a time before The Simpsons was on TV . That is, nothing wrong from a condition and maintenance point of view – execution we addressed earlier.

The state of Thelma also became apparent to me when I flew out and brought her home last fall. Thelma, for her age and sins got really good fuel mileage on her ride home through the Rocky Mountains. She was right in the range of what she was stated to have from the factory. A 41-year-old car in this condition deserves some consideration. 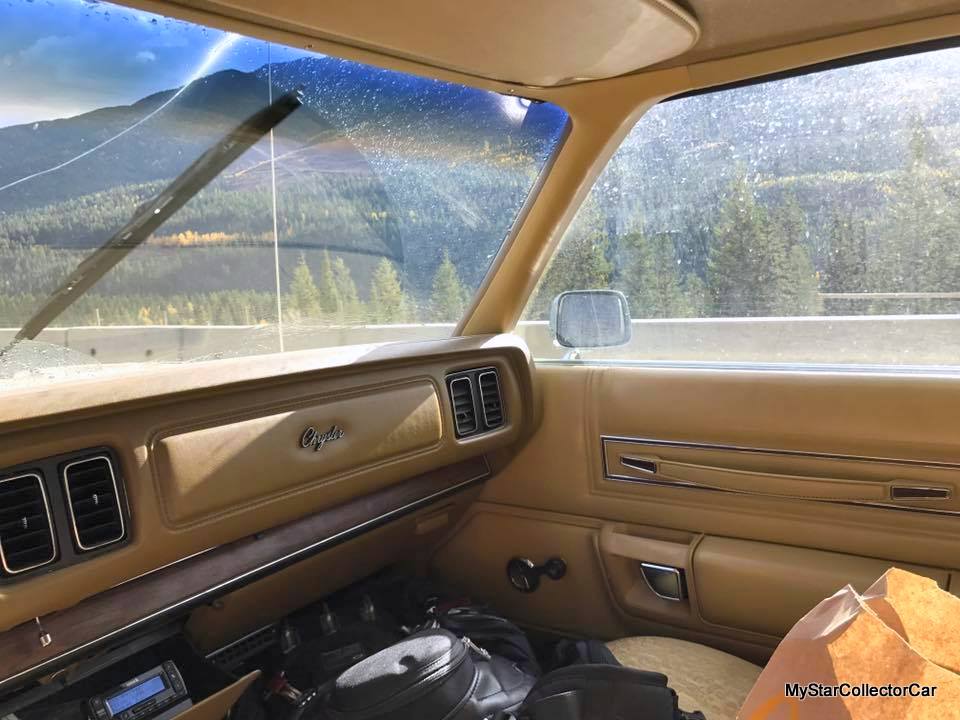 Of course one gasket leads to another but the starter was an indulgence to get rid of an ongoing starter miss. I could have easily bought the same starter but there was a high-speed, light-weight starter available at a really good price so I splurged. I weighed the new starter and the old one on my wife’s baby scale (much to her horror) and the new one is nine pounds lighter. 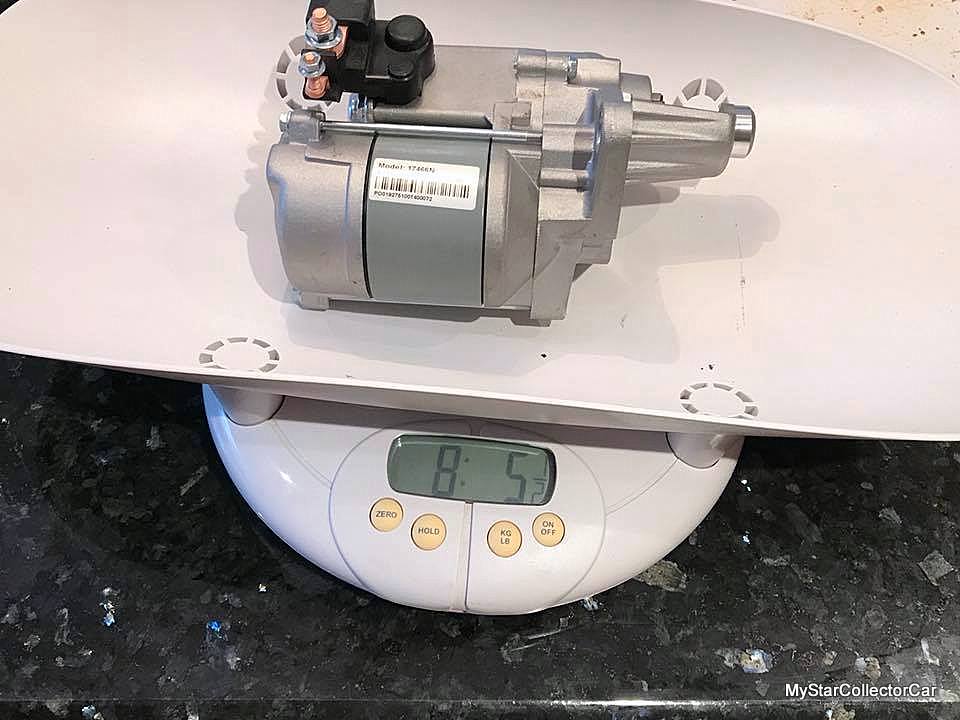 And of course all this work leads to general cleanup. I have now glass-blasted and repainted her oil pan. I now own both cans of Chrysler blue engine enamel my local parts store had in stock.  Next I need to give the same treatment to her intake manifold as I’m not installing a shiny new Holley throttle body to rusty intake manifold.

I’m still waiting for my EFI system because it was back ordered on me. Hopefully it’ll be here later this week or early next. I picked up a fuel pump block off and installed that also. So as quickly as I got the rear seal, pan gasket, pan, valve cover gaskets and starter installed – I as quickly rendered the car immobile again by removing the fuel pump.

As she sits now I have her exhaust off from manifolds to the first joint as I have to add a bung for the Oxygen sensor and I have the fuel line pinched off where the inlet to the fuel pump used to be.

The next step is to pull the inlet manifold to bead-blast and paint.

I’m going to outline my install of the EFI system here on MyStarCollectorCar.com. I think there is enough intel online on how to install this kit on a Chevy 350 and Ford 302 but it’s about time someone tackles the real world application of this system: the low compression Chrysler 400 – the last of the mighty breed of B engines. A woke generation of gearheads demands it. 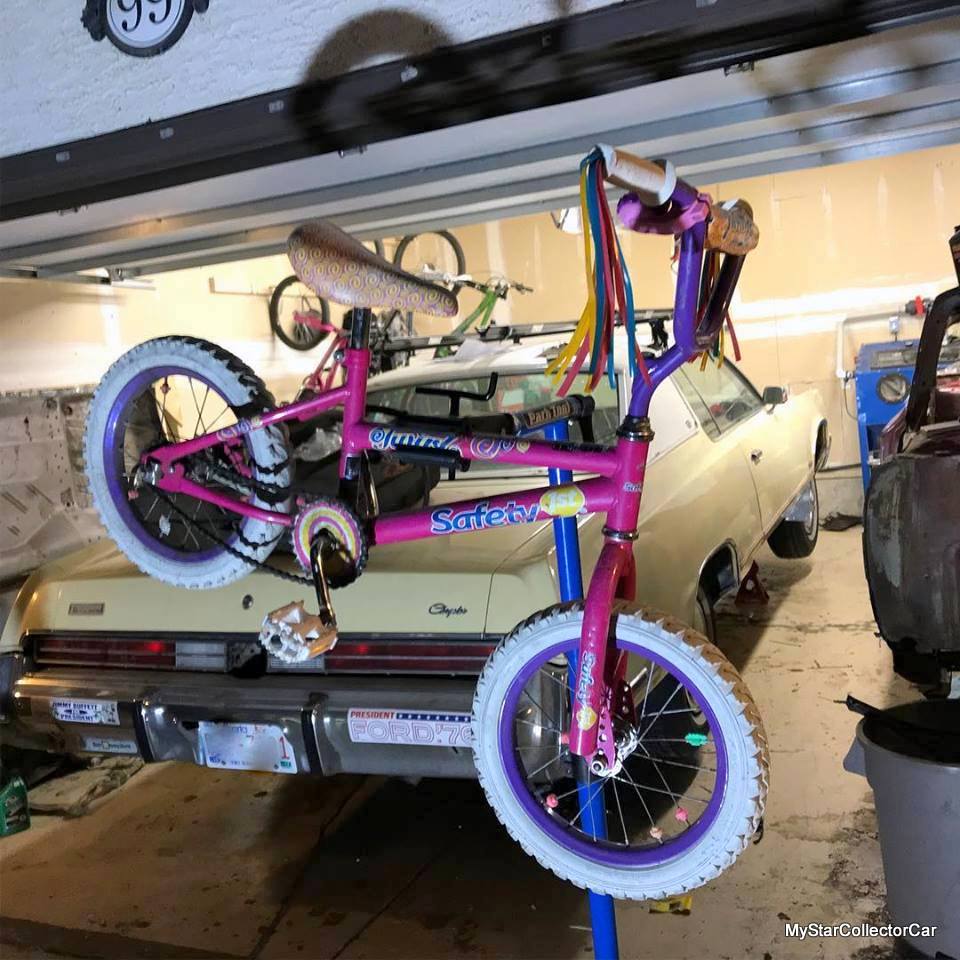 I do realize that everything I’m doing here is only addressing the fuel and air side. I am completely ignoring the spark side which is the complete opposite from the way the Lean Burn worked (or didn’t) —for now I’m OK with that.

Another thing to consider I am completely ignoring for now is that the Sniper kit is designed for engines that make over 200hp. Now I’m not saying that Thelma with her anemic 8.2:1 compression doesn’t have the potential to get over 200hp but out of the box she was only rated at 190hp. I don’t know for sure if that’s a problem but maybe. Also the Holley throttle body has a 4150 flange and, as far as I can tell, the thermo quad is a spread bore flange. I’m sure those won’t fit together so I need to figure that out. And thirdly all the instructions for installing the oxygen sensor on the exhaust refer to it being placed after the header of one side. Thelma doesn’t have headers and she won’t. Installing headers on Thelma is about the same amount of wrong as dressing your grandma in a leopard print cat suit. So the oxygen sensor is going between the configuration of the both cylinder banks. I’m not sure this will make a difference either – I expect it won’t. Like Elvis Costello, we’re writing the book as we go here.

My goal isn’t to make Thelma into a hot rod. She’s much too elegant for that but I do want to get rid of most, if not all, the quirks I outlined earlier. I want my wife to get in and know that if she takes Thelma to work she’s going to make it up the giant hill on the way without coughing or stalling. 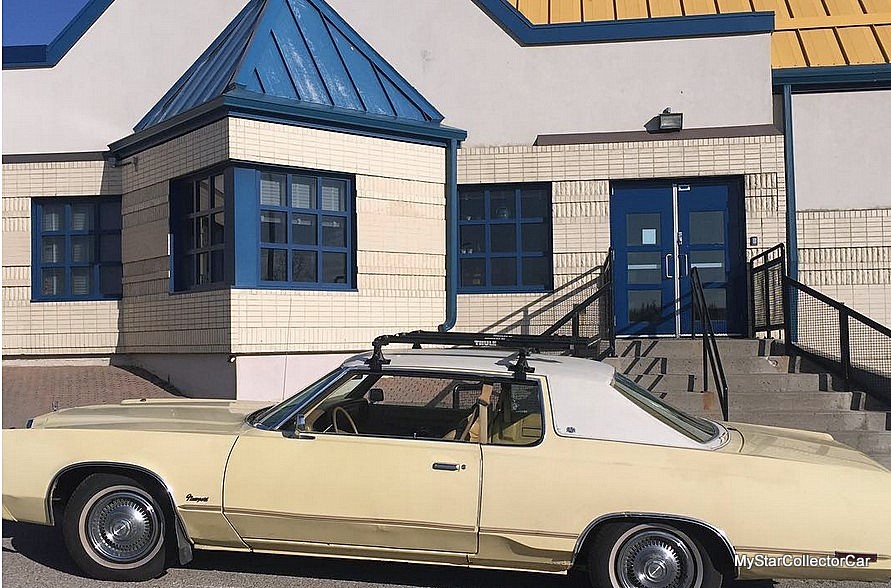 She likes Thelma and I want it to stay that way. A little more efficiently would be nice too. I believe these goals are attainable. We shall see.