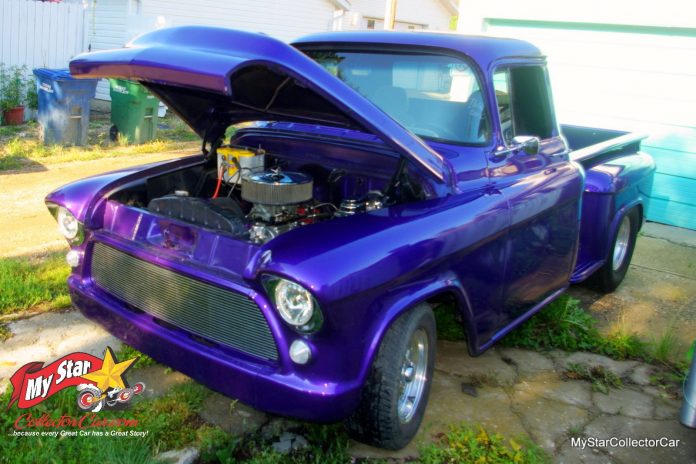 The heart of a 21st century resto mod build is typically a blend of a new age powertrain, suspension, and steering system.

However, there are still old school Chevy guys who embrace retro choices for their resto mod projects, including Terry Neufeld, a talented builder who chose a 400 small block as the base engine for his stylish 1956 Chevy resto mod pickup. He also chose a retro Turbo 350 automatic transmission to deliver the small block’s power to a 10-bolt posi-trac rear end.

Additionally, the truck now sports power steering, along with power brakes in the form of a front disc and rear drum configuration.

Older car guys will be familiar with Terry’s choice of a Nova front clip on the truck because many car guys chose this direction during a bygone resto mod era. Back in the day, the Nova front end offered better handling and braking characteristics for older vehicles, including Terry’s ’56 Chevy truck.

Terry lowered the front end of his pickup by 12 inches and dropped the rear end of the truck 10 inches, so it has a slight rake from front to back that keeps this old school hot rod trend alive in the ’56 Chevy pickup.

Terry bought the truck in 2009 and developed a unique game plan for his ’56 Chevy when he experimented with numerous paint scheme choices before he settled on purple. He also drove the truck on weekends and worked on it during the week, so his Chevy became quite famous in his local car community because it was an evolving project under Terry’s watch.

As mentioned, Terry’s final paint choice was a striking purple paint scheme that really pops on the 67-year-old pickup. He reworked the front bumper, so it was smaller, narrower, and blends into the front end of the pickup better with its overall style and purple paint. He also added a 1957 Chevy truck hood because he like the ridges on it.

Terry replaced his truck’s wooden bed with checker plate metal because he wanted a less traditional look for his pickup. He also created a stylish custom tailgate that was laser cut into the famous Chevy bowtie symbol and backlit with purple lighting to give it an even cooler look. Additionally, he smoothed out the rails on top of the truck’s bed to give it a smoother look.

There is even a Ford custom touch in Terry’s ’56 Chevy truck because he chose Ford Windstar van seats for extra comfort and style in his pickup.

The net result is a resto mod 1956 Chevy truck that goes fast and looks great getting from Point A to Point B. Speaking of speed, Terry told MyStarCollectorCar his truck “shifts out of 1st at 60 mph, shifts out of 2nd at 118 mph-and I am too scared to get it to shift out of 3rd “.