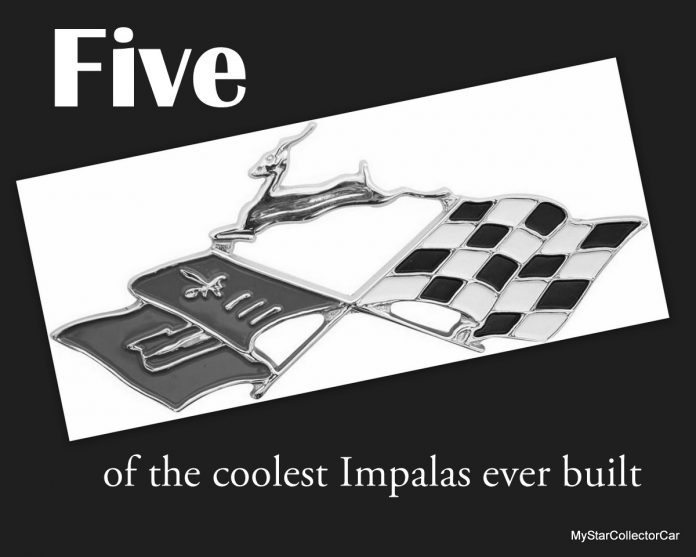 Impala has always been a solid choice for a car model name in our opinion here at MyStarCollectorCar because it pays direct homage to the famously fast animal from the plains of Africa.

The message in the Impala name is speed, so it was a natural fit for General Motors when it introduced the Impala model in 1958 as part of its Chevrolet division. The ’58 Impala looked nothing like its Tri-Five predecessor (the 1957 Chevy) because it had modest tailfins that had become radically more horizontal than the ’57 Chevy’ large vertical rear fins.

1958 also marked the debut of four headlights on most domestic cars, including the Impala models.

It will likely come as no surprise to MyStarCollectorCar readers at this point that our first addition to the Impala list is its debut 1958 edition. The ’58 Chevy Impala was a radical style departure from the 1957 Chevy and laid the style foundation for the famous 1959 Impala, our second addition to our five favorite Impalas list.

The ’59 Impala was unlike any car on the planet because it was a wild combination of rear horizontal batwings and a radical front grille design.

The 1959 Chevy Impala was a solid homage to the early stage of the Space Race because it resembled a rocket on four wheels and could indeed achieve high velocity on any of the new highway systems in North America.

The 1961 Chevy Impala is MyStarCollectorCar’s third addition to our list. The ’61 Impala was a bridge between the Fabulous Fifties and Sensational Sixties in terms of overall style. The famous horizontal batwing-style tailfins found on the 1959 and 60 Impala models were almost non-existent on the 1961 Chevy Impalas, but their legacy was still slightly evident on the cars’ rear quarter panels, albeit in a very subtle fashion.

The result was a bold new design for the ’61 Impala, a style that made the car look fast-even when parked-plus it signaled the early years of a brand-new decade that would set the automotive world on its ear in terms of a sporty look.

Perhaps the most famous example of the iconic Chevy brand is the 1964 Impala. The ’64 Impala is the perfect version in the eyes of many car guys who lean toward the Bowtie brand. The car was the final style evolution for early 1960s Impala models and was perfect in the eyes of its many admirers.

The ’64 Impala had the right mix of bodylines, bold performance upon request, and generous use of bling to accentuate the car’s status as a high-end Chevy in the car caste system. The ’64 Impala is still one of the most desirable rides in the collector car hobby.

The fifth and final member of MyStarCollectorCar’s list is the 1965 Impala, mainly because the car was radically different from the ’64 Impala in terms of style and carved its own path in this department. The ’65 Impala marked the debut of a body style that would run the course during the back nine of the 1960s for the Impala models.

For example, the new-for-1965 Impala was offered in fastback choices that would define the sporty style of late 1960s performance cars built during that famous muscle car era.

MSCC MARCH 6 “WHAT’S IT?” WEDNESDAY—THE C-PILLAR IS A GREAT CLUE