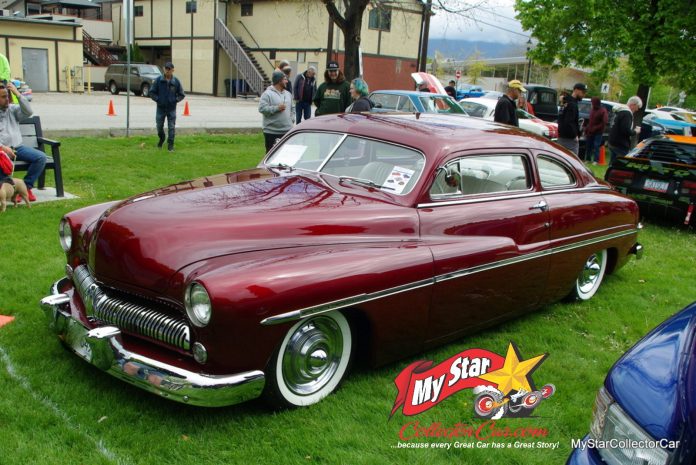 Jim Mckelvey is the owner (and builder) of this spectacular 1949 Mercury custom. His Merc ticks off all the boxes for how car guys build a chopped custom with traditional, era-correct standards.

The project started nine years ago–that’s a reasonable amount of time to nail down a build that exceeds the standard of most builds. For example, Jim said he had the car on a rotisserie for two years to get the body to an acceptable point.

This was not a job for the faint of heart because Jim was being kind when said the car was “pretty rusty”. He couldn’t open up a giant book full of parts for the car because it’s not like a ’69 Camaro–this was a completely hands-on project so Jim fabbed up his own body panels. Very few people have the skills to panel-beat metal to a high level, but that’s what Jim did over the two years on the rotisserie.

Jim admitted he had help on the roof because he had a very talented buddy take on the 3 ½” chop. The result was a spectacular blend of function and form–the door fit is perfect.

There was a massive upgrade to the suspension after Jim replaced it with a state-of-the-art system designed to make the Merc handle the road like a new car.

There’s an LS Chevy small block under the hood so the Merc moves a little faster than it did with a factory flathead, and there are other upgrades. For example, the interior (seats and package tray) came from a ’64 Thunderbird and the combination works like magic in the old Merc. The steering wheel was rescued from a ’64 Oldsmobile and brought back to life thanks to Jim’s talent at restoring and painting it.

Jim said the paint color is Candy Brandy Wine, so it really pops in the sun–and changes color at the same time. It’s a color you can’t pin down because it looks different with every angle.

The real test is in the driving experience. Jim has had the car on the road for six years and he describes the driving experience as “beautiful”. Jim admits that part of the beauty comes from the foresight he had to install air conditioning in the Merc. He also likes how the car can “easily keep up with traffic” because an old car on new roads has to run with the crowd. He doesn’t even know the gas mileage because that’s not important to him–the fun factor on the road is far more important