It was hard to miss this monstrous 1972 Chevelle at a car show.

It had a massive Chevy big block with a giant supercharger resting comfortably on the top of the big mill.

The car was actually street legal but it would never be a sleeper in any sense of the word.

Allan Flynn is the owner of this beast and he is a colorful guy with a colorful story to tell about his Chevelle. He found the car in an advanced state of disrepair (to put it mildly) when he got a little lost finding a rig location for his trucker’s job in the oil patch. 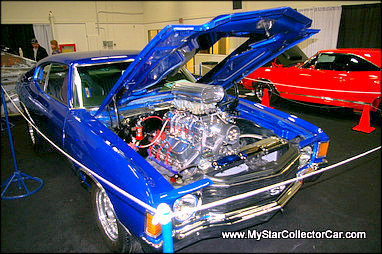 Allan spotted the car with the headlights of his truck when he was turning around and it was almost like the “Christine moment” from the haunted car movie for Allan because he wanted the Chevy the moment he spotted it.

The car’s roof and hood were caved in, presumably when it became a temporary trampoline for its former owners. The car’s caved-in roof line was so low that it had to be steered with vise grips because the steering wheel was jammed against the roof.

None of this mattered to Allan because he had decided to rescue the car and make it into a beast and we got the impression that he is a fearless man when we interviewed him.

Things got pretty interesting for Allan when he made that fateful decision because he put everything on hold for the project and dove right in the deep end. He averaged 20-hour days for 3 straight months on the car to get it ready to rumble on the street and track.

He had a technical advisor during the process that looked at the massive job ahead of Allan and told him “I’ll tell you what to do, but I am not putting an arm on that car.” None of the obstacles fazed Allan and he recounted how he spent New Year’s Eve working on the car.

‘Auld Lang Syne‘ came on the radio, so Allan took a moment to shake hands with himself, wish himself a brief “Happy New Year” and then went back to work.

A winter holiday in Mexico with his wife was axed at the last minute because of the car project and Allan is still married to the most understanding woman in the world. 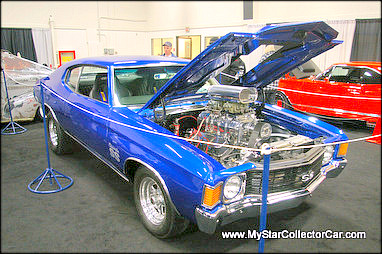 Allan’s good fortune continued when a random conversation in a supermarket checkout lineup led to a factory hood still in the box. The hood was in a chicken coop wall and he bought it for 20 bucks.

The roof was a different matter that required a floor jack, a 2 by 4 and an enormous amount of patience to move it back into place.

The Chevelle has a giant aluminum Merlin engine in it that has done a 9.40 ¼ mile at 151 mph. Bear in mind that this car is street legal although the very microscopic miles per gallon mean that Allan will never use it as a grocery hauler or commuter car.

However, he will bring it to a few shows where his enormous amount of hard work is showcased to a crowd of onlookers every time he shows up in it.

We at MSCC would like to thank Allan for a great story about hard work and perseverance in a car project that few people would have tackled, let alone completed, given the same circumstances.

MSCC MAY 19 “WHAT’S IT?” WEDNESDAY—MAKE YOUR MID-WEEKDAY A WINNING DAY