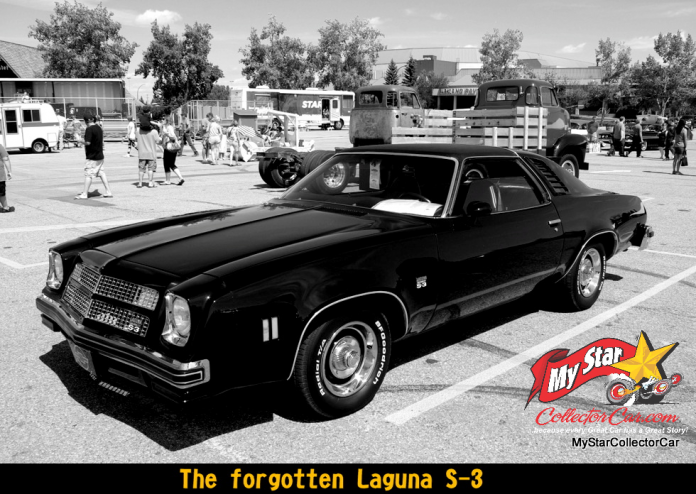 The 1970s was a decade where horsepower died a horrible death and bumpers got bigger and uglier in many cases.

The 1974-76 Chevelle Laguna Type S-3 was a good example of style in the absence of brute force engines and the presence of legislated 5 mph crash bumpers for 1973 and newer cars.  The Laguna S-3 debuted in time for the 1974 model year and only came in one style: Colonnade two door coupe.

The Laguna S-3 coupe looked fast at a standstill and gave a glimmer of hope these unique cars could live up to their racy style. The fact is the Laguna S-3 was indeed sleek enough to push the cars to the front of the line in the NASCAR circuit when the even sleeker 1975 Laguna S-3 debuted in January of that year.

The front end of the ’75 S-3 had a slant to it that added a strong aerodynamic element to the car when it was unleashed as a race car on NASCAR tracks. The extra horses under the race car version’s hood took full advantage of its front end’s aerodynamic style to bury the competition on the track. Right up until the moment when NASCAR banned the second-generation Laguna S-3 because of its sleek front end.

The factory Laguna models had to rely solely upon their style to win customers because regulations dragged the famous Chevy 350 small block down to about 145 horsepower and produced a less-than-neck-snapping 0-60 time that could be measured with a sundial instead of a stop watch.

The big block 454 engines were a scarce choice for the early S-3 models because even these bad boys had taken a big hit on the performance angle (235 HP) during the horsepower famine of the mid-70s.

Most Chevelle Laguna S-3 buyers were content to drive a car that at least looked the part of a fast car. The low bar set by new legislation meant car builders had to rely heavily upon style and the two door-only Laguna S-3 delivered plenty of style for buyers.

A Laguna S-3 model left the GM factory with a console, vinyl roof, bucket seats, opera-style rear windows in the C-pillar area to lend a helping hand to GM’s search for cool style as a replacement for brute force.

Nevertheless, the Laguna S-3 offered an upgraded handling package that included a firmer suspension with a stabilizer bar and bigger tires to push the cars through curves better than most of its 1970s-era competition. The basic message was the S-3 may not roast the rear tires at the start, but eventually it would climb to higher speeds that warranted nimbler handling characteristics.

The Chevelle Laguna S-3 era faded to black in 1976 after three years of production and has yet to enjoy a surge in collectability, despite its NASCAR legacy.

However, the S-3 is a primary example of 1970s style at its finest and should always be fondly remembered for its Me Decade legacy.

MSCC DECEMBER 25 STAR OF THE WEEK—YOU KNEW IT WAS GOING...