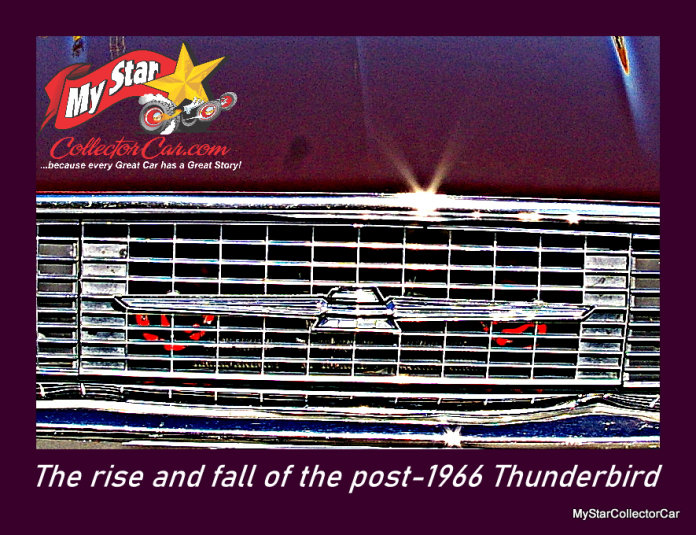 The Ford Thunderbird will always be a big part of the Blue Oval legends because it blazed a unique flight pattern over the decades.

MyStarCollectorCar chronicled the car model’s early nicknames in an October 11, 2018 article and showcased its legacy from the car’s earliest Baby Bird years (1955-57) through its Flair Bird era (1964-66).

However, MyStarCollectorCar will follow the Thunderbird’s flight plan from its post-Flair Bird era in 1967 until its final crash in 2005.

The 1967 Thunderbird was a huge departure from earlier T-Bird models because it eliminated any connection with the car’s 1955 debut as a sporty two door model after the ’67 T-Bird became an even larger and more luxurious ride with optional rear suicide doors.

The ’67 Thunderbird also had hideaway headlights because this particular automotive feature was very popular by the late 1960s. The 1967-69 T-Bird era cemented the Thunderbird’s image as a true luxury barge in the grand scheme of things at Ford Motor Company.

The Thunderbird maintained this style until the dawn of the 1970s when it produced a striking new car that proved beauty was indeed in the eye of the beholder. The 1970 T-bird had a very prominent beak that dominated the front grille on the car.

The new ’70 T-Bird front end was bold, unique and became a water cooler topic for car guys who enjoyed a lively debate about whether the new front end was an asset or liability for Thunderbird sales that year. The controversial design lasted for two years (1970-71) and was the last four door T-Bird built by Ford.

Nevertheless, the 1972 Thunderbird was even bigger than its ’71 predecessor and shared much of its engineering with the ‘72 Lincoln coupe models built by Ford. It was now a full-blown luxury liner that had sailed well beyond its smaller and sportier 1955 roots.

The new style included a major nose job that eliminated the prominent grille and aligned the ’72 T-Bird style with other high-end Ford models from that year. The big bird from Ford would fly the friendly automotive skies for the next four years until the impact of higher gas prices necessitated a smaller version in time for the 1977 model year.

The 1977 Thunderbird shrank by about 8 inches and lost about 900 lbs. compared to the earlier large-and-in-charge T-Bird models. The style was still a distinctively 1970s look, but it came in the smaller package due to a need to produce more fuel-efficient T-Birds during this era. Ford offered small block V-8 engines in their T-Birds and ended the Me decade with the three-year model design.

The dawn of the 1980s provided an excellent opportunity for Ford to retool its Thunderbird and celebrate the new decade with a new look. The 1980-82 T-Bird was even smaller than its late 1970s predecessors and now rode on Ford’s famous Fox Body chassis.

The 1980-82 T-Bird still had a squarish body style that was reminiscent of the 1970s and proved to be a bridge model for the more rounded 1983 versions. The 1983-88 Thunderbirds embodied the Eighties’ automotive style in a big way-particularly as it applied to the Ford family.

The T-Bird got rounder, sleeker and leaner during this time frame while including more efficient power options that used turbo boost and fuel injection to full advantage on the smaller engines by 1988.

The 1989 Thunderbird marked another bold new direction for the famous Ford model. The cars became larger and sleeker while the engine options did not include a V-8 choice for the first time in T-Bird history.

Supercharger-enhanced performance combined with well-engineered passenger comfort during this generation of T-bird production, so the fabulous Thunderbirds continued to fly until the last car from their consecutive production years was completed on September 4, 1997.

The Thunderbird was grounded until 2002 when Ford reintroduced it as a retro style model to its lineup. The 2002 T-Bird was built as a two-seater for the first time since the first generation 1955-57 Baby Birds and offered a modern 21st century alternative to the iconic 1950s-era T-Birds.

However, the resurrection of the Ford Thunderbird model was not a home run with buyers, so Ford dropped the T-Bird from its lineup (presumably forever) after the final T-Bird left the factory on July 1, 2005.

The legacy of the Thunderbird has always been a huge part of Ford’s legacy over many decades. The changes in the T-Bird reflected Ford’s ability to change with the times so the car was never behind the curve in automotive progress.

In between was a very different flight plan for the fabulous Thunderbirds.