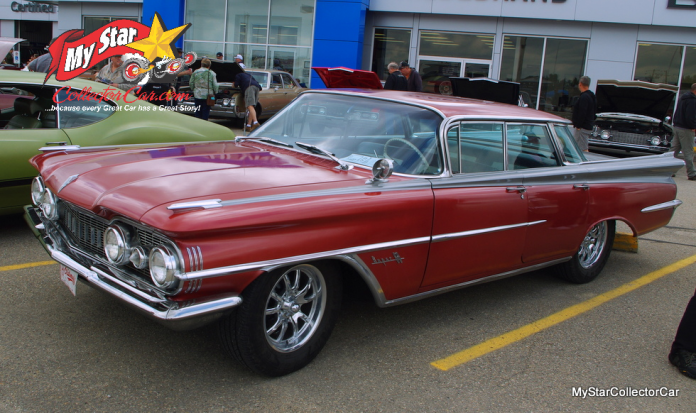 Freeway construction exploded in the 1950s and that advancement produced freeway-friendly cars.

The late 1950s were a golden era for cars that could run at 75-80 miles per hour in living room comfort for the passengers.

The 1959 Oldsmobile is a textbook example of how far Detroit was prepared to go in the automotive  battle of the turnpikes. 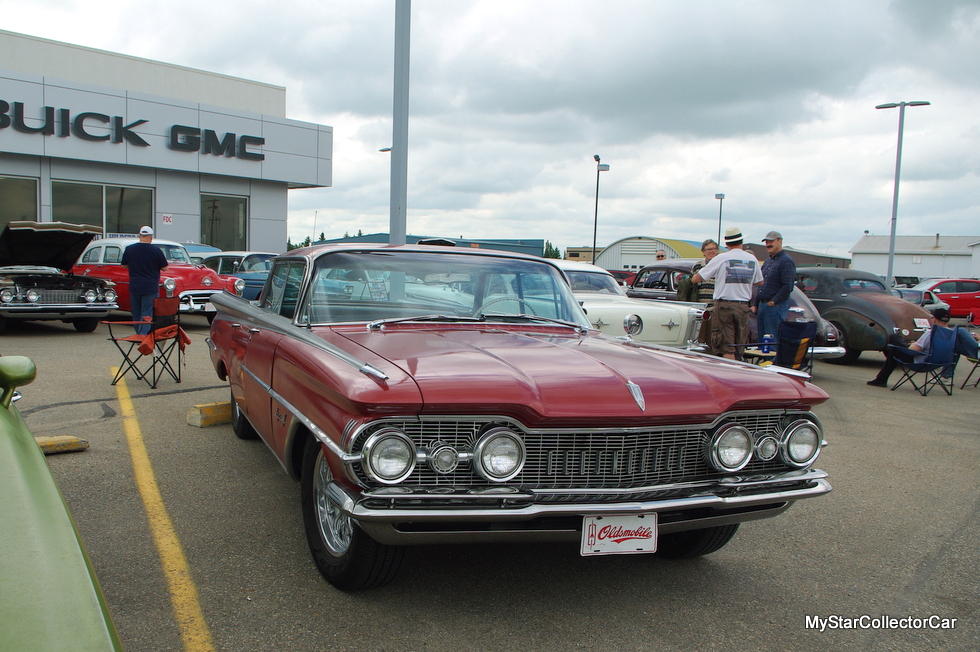 George Merlidge is the proud owner of a 1959 Olds Super 88 4-door hardtop. He was spotted in the fast lane on a major freeway last summer so that day’s quest was simple—find the car and driver. 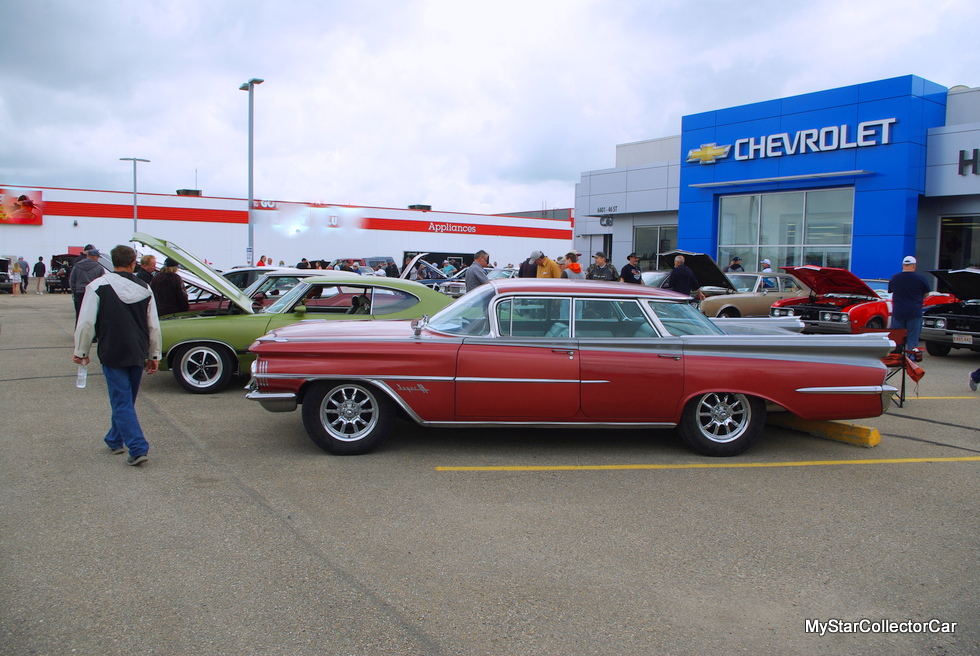 Fortunately George and the Super 88 were found at an annual Oldsmobile show that day and he was pleased to talk about his classic Super 88. The history of the car covers “at least 4 owners” prior to George but he definitely knew who the first owner was—a Saskatchewan (Canada) farmer who bought the Olds for his annual winter trips to Fort Meyers Florida. The farmer/snowbird used to aim his car south every winter to escape the ravages of winter on the Canadian prairie. 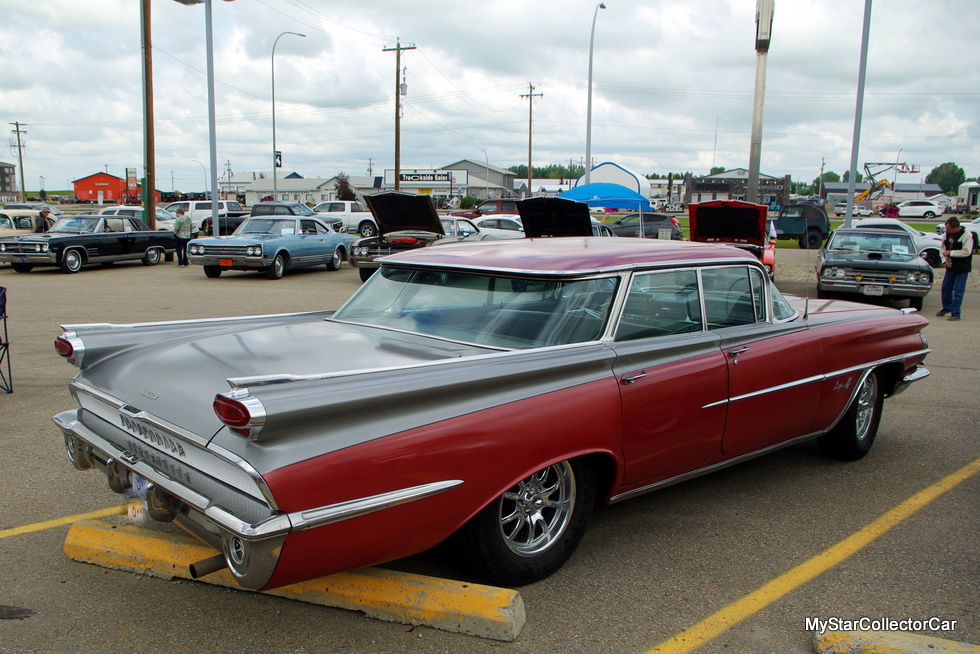 George has always been an Olds guy—in fact he said he “bought them until they quite making them” so his loyalty to Oldsmobile was unquestioned. The other factor was an uncle who owned a ’59 Oldsmobile when George was a kid so the hook was set early. 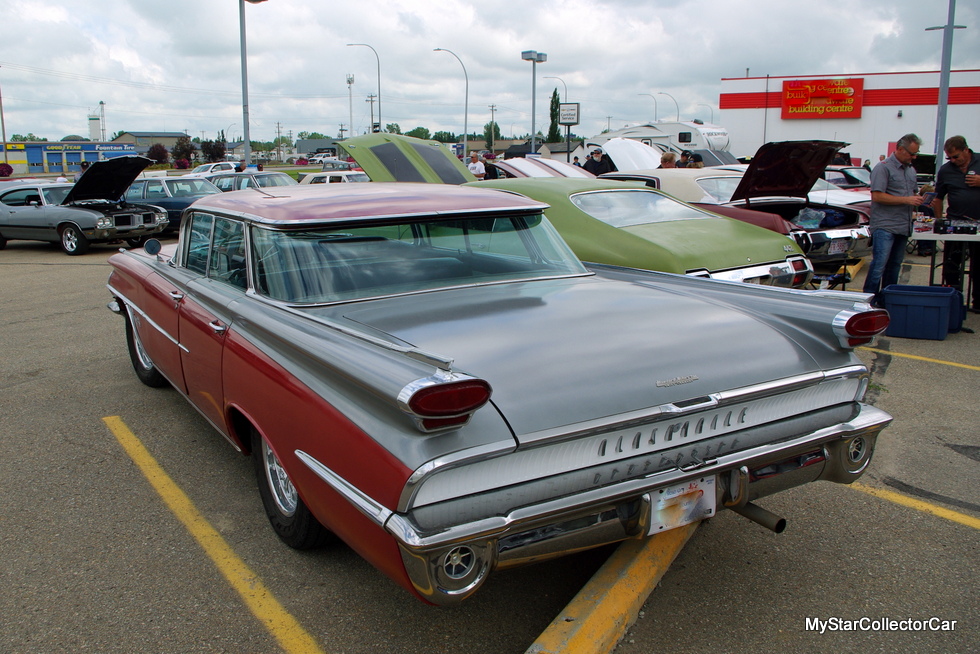 He’s owned the car for over twenty years but it was in rehab for five years when George started a frame-off restoration. The car was in good shape but George said there was a fair amount of gravel evidence in odd places under the Oldsmobile  where it had knocked off the undercoating.  There was also evidence of a crash on the passenger side in the Super 88’s past but its sunny, dry history was clear when George tore the car apart. 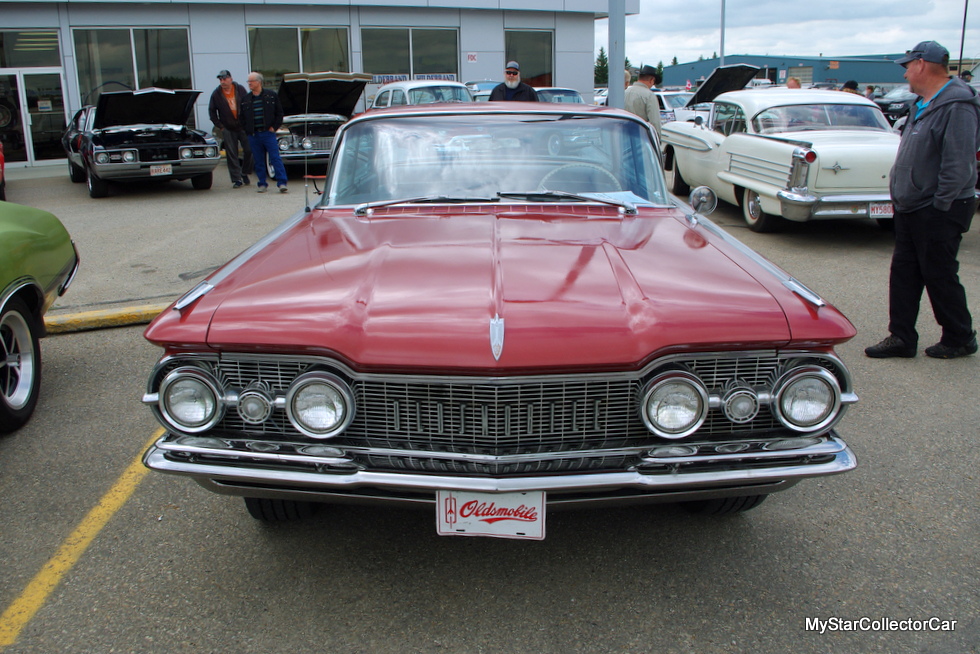 George said he “put it on a rotisserie and replaced panels where needed because the front fender had some rot” and then applied a new coat of paint. The only thing he didn’t do on the Olds was the interior but he did source the correct material for the seats — there were areas where the seats “were coming apart” because they were so dry and brittle. 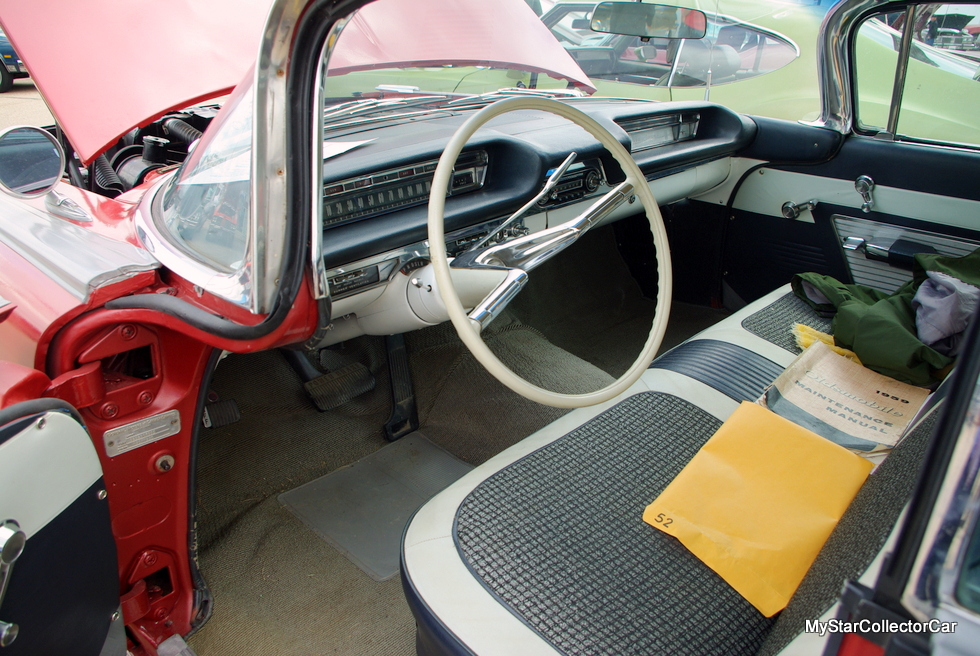 George had a buddy go over the 95,000-mile 394 cubic inch V-8 under the hood but all it needed was new seals so the Olds clearly had a tame series of owners. George wasn’t surprised because he said the car always ran like a top.  The transmission was also in great shape too after George had “an old guy who knew how to work on it” look at it in detail. 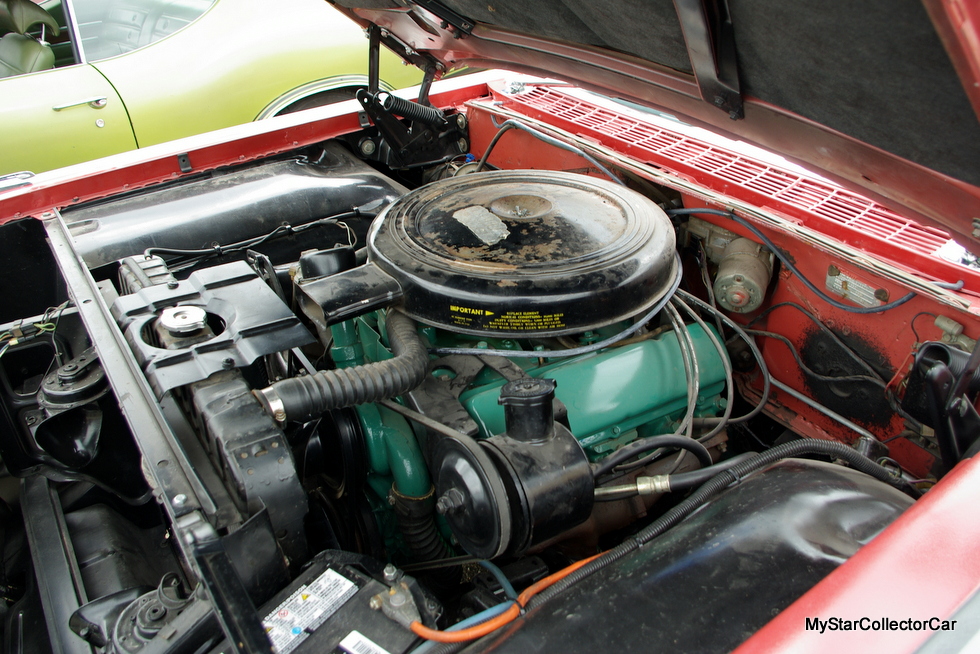 George said he “picked away” at things like the suspension and brakes over the years so this Super 88 is rock solid on the road. He said the power steering is light—like a typical 50s car but he sure appreciates it in parking lots. He also upgraded/upsized the wheels and tires after his son gave him one new wheel for Christmas—he had to buy the other three. 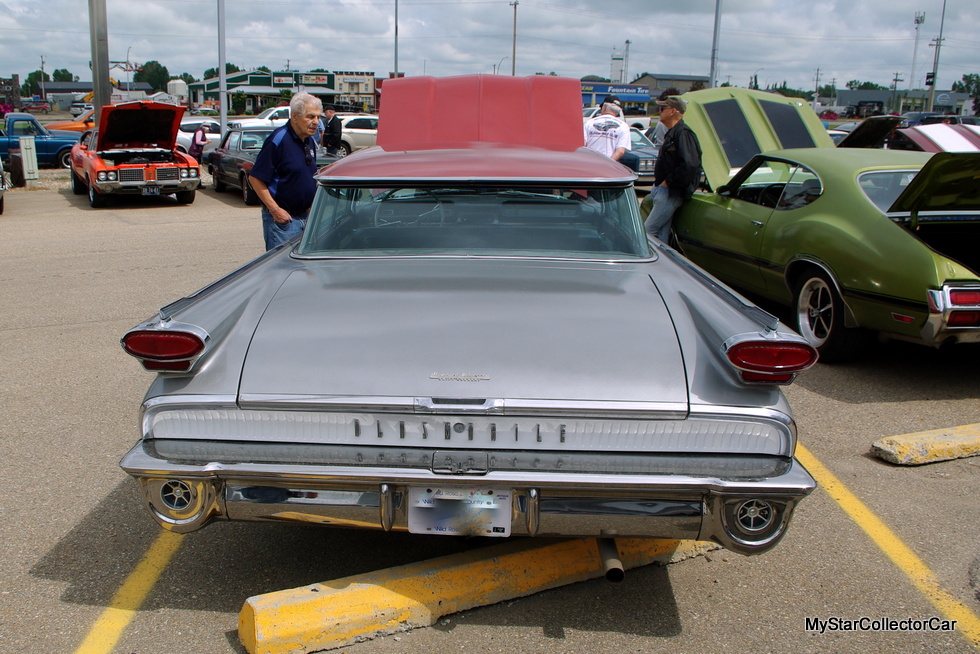 There are a few things left to do on the car—the power seat blows fuses and there are other cosmetic details like a power polish on the paint but George is very happy with the ’59 Olds. 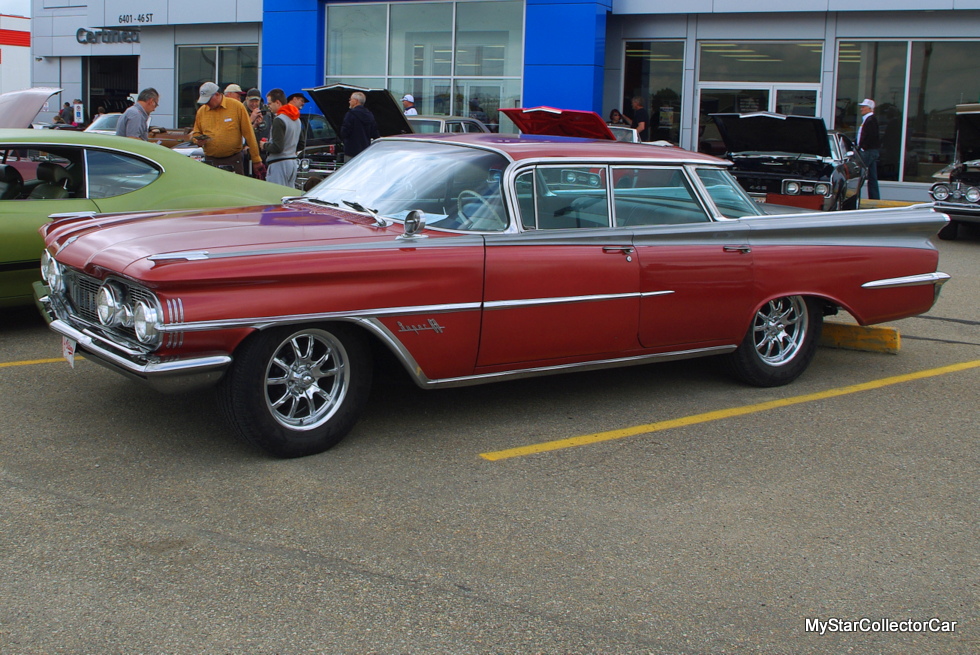 That’s why he still runs the big Olds in the right place on the freeway—the fast lane.