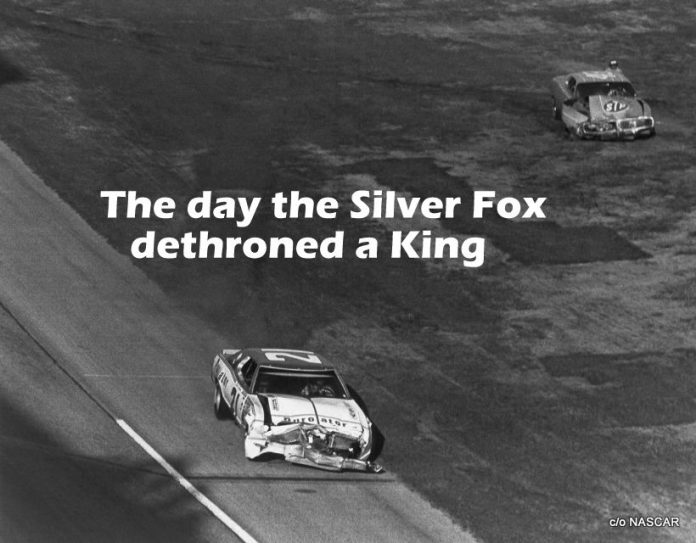 MyStarCollectorCar has never made a secret of our huge loyalty to King Richard Petty.

The King was the guy who always got it done in NASCAR’s roundy-round circuit and exerted domination at the Great American Race (better known as the Daytona 500) during his storied race career behind the wheel of Number 43.

King Richard’s ascension to the NASCAR throne was always paved with moments of unchecked danger, thrills, heartache and success. The road to the top was never easy for Petty, but he was able to rise above the rest and amass 200 victories during his long history as NASCAR’s greatest driver. The next driver on the all- time NASCAR win list won 105 races during his career. His name was David Pearson and he was arguably Richard Petty’s toughest rival during the 1960s and ‘70s.

David Pearson was a publicity-shy driver who knew how to drive a race car. He stood in the shadow of the King during most of his tenure in the NASCAR circuit, mostly by choice, but partly because the spotlight shone brightly on Petty during that era.

The King loved an audience and was able to deliver razor-sharp quips to an enthralled media corps whenever he gave a presser. David Pearson was content to do his talking on the track and avoided the limelight like it was the plague off the track.

David Pearson earned the nickname “Silver Fox” as his racing legacy grew larger and his hair got grayer over the years. The moniker recognized his hair color along with Pearson’s uncanny ability to race tactically and brilliantly on a track.

The rivalry between King Richard Petty and David Pearson was the stuff of legends in NASCAR history. The two drivers competed on dirt tracks, short tracks and super tracks-any place stock car drivers clashed at the highest level.

Both drivers were more than willing to mix it up on the track. Petty and Pearson both enjoyed checkered flags because they were able to bump and bang their way to victories while withstanding the same treatment from other drivers in the race.

Their otherworldly driving abilities were rewarded with victories (305 in total between them) and NASCAR championships (10 titles in total between them). Their recipe for success was similar: win at all cost and rely heavily upon their ability to drive a stock car better than the next guy.

Unfortunately, the next guy for Pearson was Petty-and vice versa. The two drivers brawled for supremacy on the track and knew there would only be one winner followed by a long list of losers in a race. Neither driver wanted to be included in that sad list of also-rans.

The 1976 Daytona 500 provided another opportunity for the King and the Silver Fox to renew their rivalry on the track. Petty has already won the famous race numerous times while Pearson had yet to win the Daytona 500.

Eventually, the ’76 Daytona 500 boiled down to the final 23 laps and an incredible dual between Petty and Pearson for the victory. Just to put things in perspective, the third-place driver was one lap down and the fourth-place driver was two laps in arrears to the two frontrunners.

Petty was able to pass Pearson and held a slim lead as the race dwindled down to a handful of laps when the King was passed by the Silver Fox. The final lap ended in a demolition derby when Pearson tapped Petty (just as the King was regaining the lead) and caused both drivers to crash into the wall within hailing distance of the checkered flag.

Pearson recalled that he was able to get his car into neutral and rev it to the max so the engine would not stall on him. Petty ended up about 75 heart-breaking feet from the checkered flag after the crash and was unable to keep his car running, so he was beaten to the flag by Pearson.

It would be fair to say that Pearson out-foxed Petty during that final sequence of events. It would be even fairer to say the 1976 Daytona 500 was one of the greatest moments in racing history because of its finish.

Even for unabashed King Richard Petty fans like us here at MyStarCollectorCar.

The race was a soul-crushing disappointment for Petty fans, but it was also a Daytona 500 finish for the ages.

SEPTEMBER 2010 -STARS OF THE SHOW FROM THE SUMMER