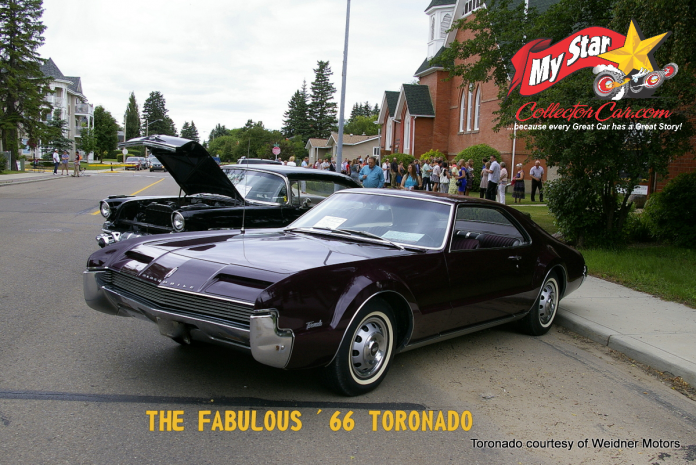 The introduction of the 1966 Oldsmobile Toronado produced an F-5 (not F-85) tornado in the domestic car world.

The car was the first front-wheel drive car produced in North America since the famous 1937 Cord models (810 and 812) put front wheel drive cars on the domestic automotive map.

It was a well-engineered car that was the product of massive technology research and a bold new direction for its General Motors team of creators.

The car was an engineering marvel because it had a big block 425 cubic inch V-8 mounted in a traditional position under the Toronado’s hood. Modern front wheel drive cars have transverse-mounted engines (positioned sideways) to gain a space advantage under the hood and allow a seamless union with the transmission so it can deliver efficient power transfer to the front wheels.

The ’66 Toronado was different because its engine hooked up to the torque convertor and then took a radical turn to engage the Turbo 400 3-speed automatic transmission through a unique chain drive system with a 1:1 ratio. GM positioned the tranny so it faced forward and connected with a small specialized planetary (moves each drive wheel at different speeds) differential that delivered power to the front wheels via a short but thick driveshaft on each side.

Bear in mind the GM engineers also had to maintain a high level of comfort because the ‘66 Toronado was the newest member of the Oldsmobile family and needed to reflect a dedication to luxury in their new car.

The biggest concern for most car guys is the “torque steer” issue found in most front-wheel drive cars. The power transfer to the front wheels means the driver usually is forced to fight against the drivetrain to maintain control of the vehicle. Therefore, arm-wrestling the steering wheel of a front wheel drive car upon acceleration is known as torque steer in car guy circles.

The torque steer problem is the main reason race car drivers and builders of sound mind would never consider a front-wheel drive car for competition purposes.

However, the 1966 Toronado never had major torque steer issues-despite the presence of a beefy 385 horsepower engine with 475 lbs. ft. of torque to potentially twist the steering wheel out of the driver’s hands. Instead General Motors provided a smooth driving experience — even under heavy acceleration.

The Toronado engineers were able to dampen the torque issues with a tough rubber sleeve on the right drive axle that twisted just enough to allow the driver to retain control of the steering wheel when gas pedal met floor in the car.

The result was an anti-torque steer system that was both effective and durable in the Toronado. The car also had a beefier front subframe that ended in a ladder configuration about halfway down the body underside. Additionally, the Toronado had an innovative suspension system that used both torsion bars and conventional springs to deliver handling and comfort in a ‘66 Toronado.

The hideaway headlights and fastback roof design gave the 1966 Toronado an innovative style that suited the car’s position in the Olds lineup as a sporty two-door coupe.

It’s no secret why the Oldsmobile Toronado was named Motor Trend’s Car of the Year when it debuted as an exciting new model in 1966.

This innovative front wheel drive coupe was ahead of its time in so many ways that ranged from style to performance and its legacy in the car hobby gets larger every year.