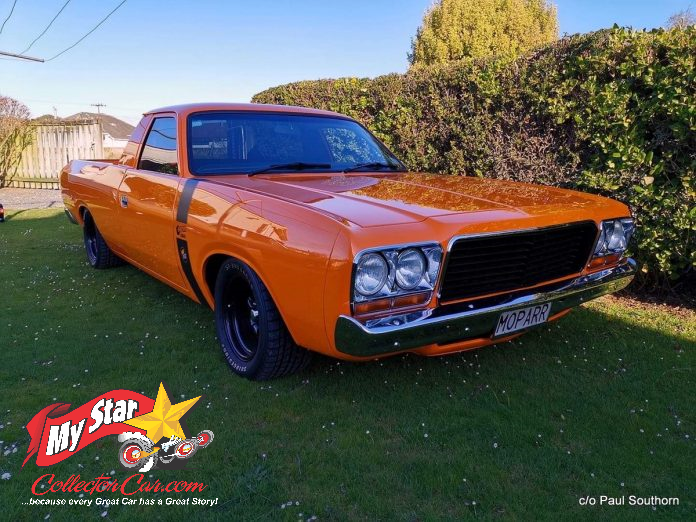 Utes are a household word in Australia and New Zealand.

Paul Southorn is the proud owner of a 1977 Chrysler Valiant Ute – it’s a classic vehicle in his home country of New Zealand so he’s really happy to have it in his garage as he explained: “It’s pretty rare and it was built in Australia for the local market as well as NZ market. Utes are an icon in this part of the world. The closest you have would be Ford Rancheros and Chev El Caminos”.

He had a basic game plan for his Ute: “The Valiant was born with a 245 cubic in straight 6 with 3-speed manual column shift. I bought her in 2003 as a hobby car. Pulled her off the road in 2014 for a minor make over”. Paul explained how the project grew into something bigger: “One thing led to another…. and it turned into a pretty major and expensive project”.

Paul was really happy with his starting point because these little trucks typically had rough lives: “Utes were generally not garaged as they usually work/tradie used. I struck it lucky with this one as very little rust. I’m only the third owner”.

The plan started out with a small goal, but it grew: “Originally was going to be a quick re paint in the original yellow. Decided to go for orange…. out came the motor (not original) which led to full rebuild/up spec. One thing led to another like a lot of projects. Could leave the interior so that ended up being re done as well”.

Vintage Utes are wildly popular in New Zealand as Paul explained: “She is also a real head-turner and I would say gets more attention at shows than a ‘69 GTX because of the loud colour plus the locals know what it is”. Paul’s motivation was simple because he had another version of the Valiant in mind:” They built a small number of Valiant Chargers with triple Webers. They were known as E38 and E49s”.

Paul is a builder and he builds vehicles to drive and this hot little Ute is no exception: “It’s very fast…very rare. She loves to rev and can give plenty of V8s a good run for their money. It’s a totally different drive from something like a big block Mopar”.

This Valiant may have started out as a barebones work truck but that changed under Paul’s watch.