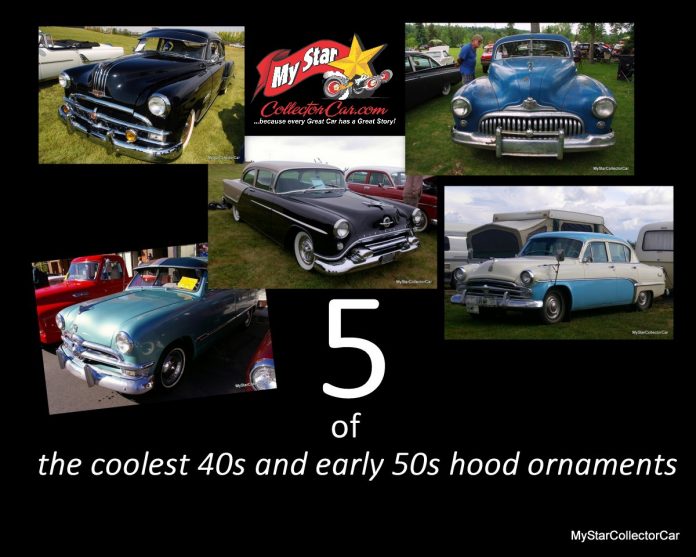 There was a bygone era when cars had incredible hood ornaments that could easily qualify as automotive art.

The post war cars’ hood ornaments may not have been designed on as elegant a scale as the luxury cars built before the war, but the hood bling on post war rides was a big part of their curb appeal in many cases. MyStarCollectorCar would like to present a case for the five best hood ornaments found on post-war cars.

The first hood ornament on our list is the Pontiac hood emblem that adorned the car until 1956.  In fairness, the Pontiac emblem was used prior to World War Two and honored the Ottawa tribe’s Chief Pontiac for his efforts against the British forces following the end of the French and Indian War in 18th century North American history.

However, we chose to acknowledge the hood ornament known used by Pontiac in the late 1940s and early 1950s, some of which were also illuminated. They were known as the “Indian Head” hood ornaments and were a big part of the Pontiac identity until their disappearance in 1956.

The second addition to our post-war hood ornament list is the early to mid-1950s Oldsmobile hood decoration. The Olds emblem from that era reflected the early days of the jet age and was shaped in the basic sleek form of a jet.

The basic plan was to align the car with the jet, particularly after famous test pilot broke the speed of sound in 1947 while flying his experimental Bell X-1 aircraft. The inclusion of a jet hood ornament was a sound strategic move for Oldsmobile’s parent company General Motors during this time frame.

The idea of a sleek jet-styled hood emblem was not lost on Dodge because they also had their jet versions that debuted on their 1955 models, but they used the famous Dodge Ram hood ornament on their earlier models. The Dodge’s ram emblem got faster and sleeker-looking before it disappeared by ’55, presumably because of the need-for-speed-jet fad for hood emblems during the early days of the jet age.

Nevertheless, Dodge’s ram emblem was unique and stood the test of time for Mopar because eventually the Ram name replaced the Dodge name on their 21st century trucks, albeit without a ram hood ornament.

The fourth addition to our hood ornament list is the unique circular design found on the famous shoebox Fords built between 1949 and ’51. The emblems evolved over three years via the stylish add-on clear designs that bordered the circles and were intended to add a sense of speed into the overall mix.

The fact the shoebox Ford was a completely new aerodynamic design likely added to the need for a fast-looking hood ornament on them.

The fifth and final addition to our post-war hood ornament list is the famous bulls-eye target emblem used by Buick on their post-war models. The mood of World War Two was still part of the program when Buick installed the gunsight hood ornament on their 1946 models, a trend that would continue into the 1950s on the cars.