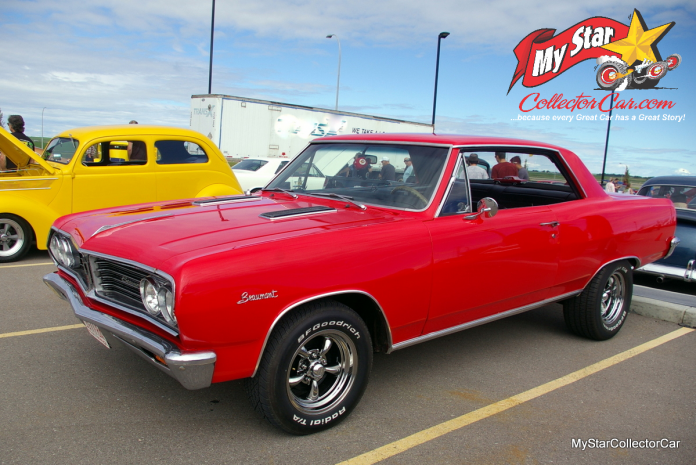 There will likely be a few puzzled MyStarCollectorCar readers when they see the 1965 Acadian Beaumont name in the title and wonder why a 1965 Chevelle is shown in the photos.

This brief lesson in Canadian automotive history leads to our MyStarCollectorCar feature story about Ernie Harty’s beautiful 1965 Acadian Beaumont resto mod two-door hardtop. Ernie’s Beaumont may be the perfect retirement gift because he bought the car to celebrate his last day in the workforce.

Ernie told MyStar he owned fast cars when he was young and was seeking another retro road rocket when he discovered the ’65 Beaumont. Ernie admitted he had not considered the Beaumont to be the car of his dreams until he discovered it checked off all the boxes on his retirement car list.

For example, the original powertrain had been yanked in favor of a beastly 383 stroker engine that was hooked up to a four-speed manual transmission and delivered plenty of horses to the low-geared rear end. The result is a car that “screams at 70 mph”, according to Ernie, but gets there in a big hurry.

The Beaumont was also bright red when Ernie became its owner, plus it had a stylish rake from its elevated rear deck to the front end. Older car guys will easily recall when this rake style was a big part of the hot rod philosophy from the past.

The ’65 Beaumont was never equipped with factory tilt steering, but Ernie’s car has this feature because of its previous owner’s resto mod game plan.

Ernie is a dyed-in-the-wool car guy (one who seeks the best deal), so an agreeable price tag was a factor in his purchase decision. The ’65 Acadian Beaumont was sold by a previous owner who was in the midst of his own economic downturn and offered the car for sale at a reasonable price.

As mentioned, Ernie purchased the car as a retirement gift for himself and was willing to tinker with the car during his new abundance of spare time. He dealt with the Beaumont’s electrical issues and was able to correct a problem with the electric fan system on the car over the winter months.

Another reason the car was not totally finished (and required a few tweaks before it was ready for the road) was the proper installation and mounting of the front passenger seat.

The past summer was a shakedown year for Ernie and his Beaumont while he enjoyed his post-retirement era in retro automotive style.