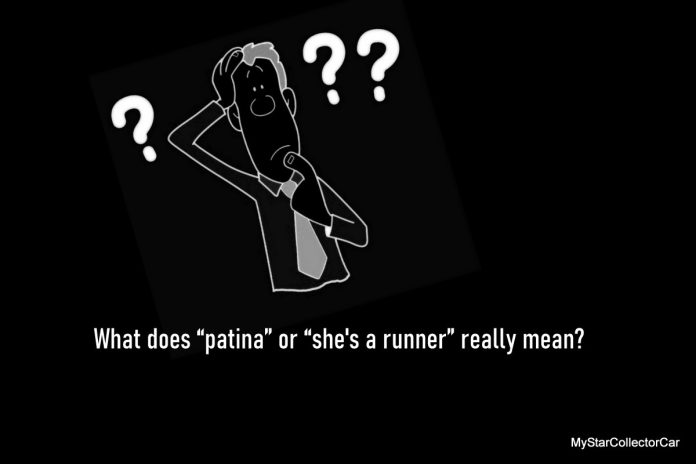 The car hobby has a language of its own.

One of the most well-known current terms in car guy world is “patina”. This word is a catch-all expression in the car hobby and was originally hijacked from its use as a term for tarnish on bronze metal when it ages through oxidation.

These days patina has a broader meaning for car guys, even though the term still encompasses the basic notion of deterioration. The difference is the degree of deterioration when the patina term is applied to old vehicles because one man’s patina is another man’s rust bucket.

Patina can be a simple case of faded paint, but it is most likely a collection of dents and rust that range from fixable to terminal. Some car guys clear coat the vehicle to enshrine its rust-hood and give it speedy admission into the patina club, while others will de-patina the rusty relic and reject the notion that metal is at its best when it’s exposed and in an advanced state of decline.

The second term has links to the first term because it does not celebrate patina and instead tries to sweep it under the rug, so to speak. The second term is “surface rust”.

In most cases, this description grossly understates the car’s current state of metal deterioration and only scratches the surface (in a literal sense) as it applies to rust because underneath that surface rust is a hidden horror story worthy of Stephen King if he was a car guy. Surface rust is a term used frequently in vintage vehicle ads and a very dangerous landmine for car guys who buy into the sales pitch.

The third common term in car guy lingo is “runner”, as in “She’s a runner”.  A runner is any old vehicle that “ran when parked”, likely during the Reagan or Carter years, and inexplicably fired up for its latest owner, after decades of inertia.

Runner typically means the old ride’s engine sputtered to life after a series of successful attempts to resurrect it, including fresh gas, ignition components, and a massive amount of good luck that rivals a lottery win in most cases. Most runners run badly after the resurrection, but they give car guys a huge morale boost whenever it happens for them.

MyStarCollectorCar’s fourth common expression in car guy-speak is “survivor”, another ambiguous term that has likely inspired a few car guy fistfights over its definition.

A survivor car may have every one of the previously mentioned car guy terms- or it may have led an incredibly pampered life and somehow remained in its original condition and stayed remarkably intact over a long period of time. Or it may have gotten a new paint job at some point in its history, but its owner inexplicably still considers his old ride to be a survivor.

The fifth and final addition to MyStarCollectorCar’s short list of car guy lingo is “driver”. The term generally applies to any vintage vehicle that is driven on a regular basis, but the devil is in the details because “driver” is a very subjective notion that may range from 100 miles a year on the road to thousands of miles a year on the road in a retro ride.

We at MyStarCollectorCar lean heavily toward the higher number in our definition of driver but congratulate every car guy who drives their vintage vehicle instead of occasionally dusting it off in its garage jail.