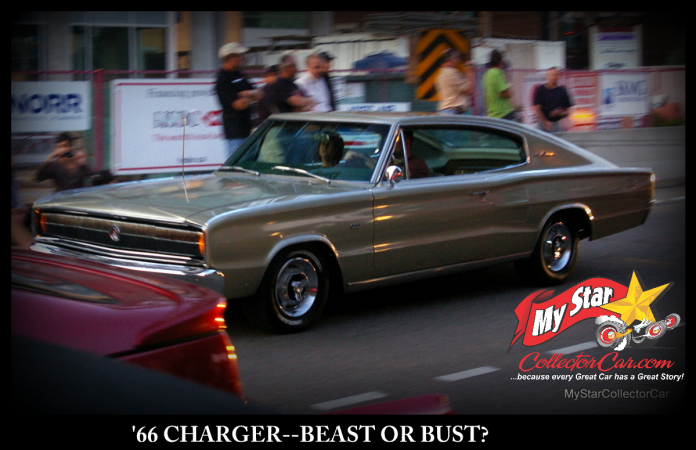 The title begs an answer to the question so MyStarCollectorCar wants to make our opinion known to our readers.

We at MSCC believe the 1966 Dodge Charger is a winner in every sense of the term.

The ’66 Charger was created so Dodge could offer a competitor in the lucrative sport coupe market dominated by a little firecracker known as the Ford Mustang. During the mid-60s, the newest domestic car market (pony cars) was also served by the Plymouth Barracuda, consequently Plymouth’s Mopar sibling Dodge wanted to jump into the fracas with its own sporty model.

Enter the 1966 Dodge Charger, a larger-than-Mustang car that could best be described as a thoroughbred by comparison because of its bigger size and lightning speed produced by brute force engine options that ranged up to the legendary 426 Elephant Hemi.

The ’66 Charger was a B-Body (intermediate-sized car from that era) that was based upon the Dodge Coronet and introduced late in the 1966 production year. The link between the Coronet and Charger was obvious because they shared the same platform and basic appearance- but with some major differences.

Firstly, the 1966 Charger had hidden headlights in a front-end design that took most of its cues from a basic Coronet grille. The overall result was a front end that was nothing short of ultra-stylish and spectacular in our opinion.

The second major style difference between a basic Coronet design and the Dodge Charger was the roof design. The ‘66 Coronet had one of the coolest C-pillars (the support structure on the rear part of the roof to the deck of the car of the car) in automotive history with its triangular-like shape, but the ’66 Charger had an incredibly designed fastback C-pillar on it.

For the record, fastback roofs were already a hot item on the sporty models in 1966, including the Mustangs and Barracudas, but the Charger fastback roof design was stretched to the rear of the car and took the car’s radical C-pillar to a completely new level of cool.

The third innovative feature on a 1966 Charger was the center console design on the cars. Chrysler had already developed a stylish console that ended before the back seat in most of its models.

However, the ’66 Charger had an elongated console that extended into the back seat and gave the car a stylishly innovative interior feature in the Mopar family of sporty two-door models.

The fourth unique feature found in the 1966 Dodge Charger was its unusual electroluminescent dash pod. The rare and complicated lighting system shed a bright light on the instrument panel gauges, but they were considerably more complicated than a conventional instrumental panel’s light bulb system.

The fifth and final reason MyStarCollectorCar loves the 1966 Dodge Charger are the rear taillights on the car.