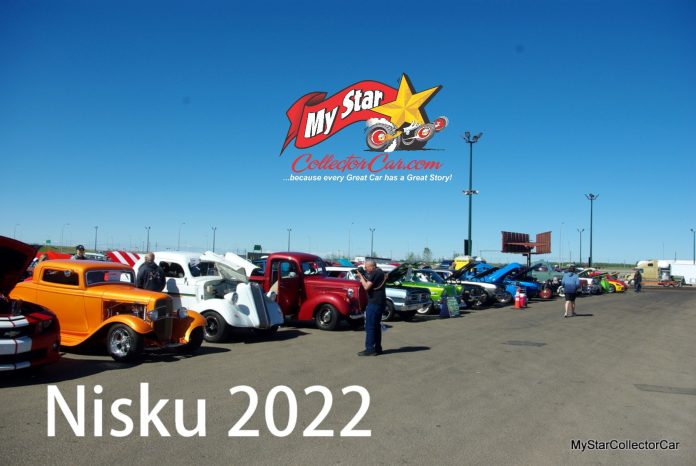 Edmonton, Alberta Canada is one of the northernmost major cities on the planet, so it seems appropriate to add “Ice” to the name of a large car show held in late May in any small community within close proximity of Edmonton.

Ice and snow are unlikely by late May in the Edmonton area, but these cold weather events are not impossible either.

The weather gods smiled warmly upon the Icebreaker 3 Club car show, so ice could only be found in cold beverages this past Saturday and the event was a big success for the organizers.

The Icebreaker show also provided plenty of good stories worthy of MyStarCollectorCar’s pages, including a 1970 Mustang Mach 1 that was restored right back to its showroom glory by its proud owner.

There is a very interesting story why he became the Mach 1’s owner, one that involves one of the most understanding wives in car guy history. MyStarCollectorCar will reveal all the details in a future article.

A 1979 Monza Spyder showed up in beast mode at the Icebreaker show. These compact sedans were built by Chevrolet after the 1973 Arab oil embargo when smaller cars meant better MPG.

The Monza’s owner was always a big fan of the smaller GM car built during the 1970s but wanted one with more power in the finest tradition of TV’s Tim “the Toolman” Taylor. Mission accomplished in our humble opinion here at MyStarCollectorCar-and our readers will agree when they learn all the details about his wild ’79 Monza resto mod in a future piece.

One of the more unusual vehicles at the Icebreaker show was a heavily altered 1948 Willys Jeep pickup that was far removed from its stock version. Its owner was a talented car guy who built his resto mod Jeep truck in the finest tradition of hot rodders from a bygone era.

Old school hot rodders built their rides from a variety of other makes and models, but the ’48 Jeep owner took that mix-and-match concept and ran with it in an even bigger way. MyStarCollectorCar will explain his car guy recipe for success in a future article.

A 1938 Ford pickup truck was a stunning example of incredibly good things happening to pre-war rides. Even better, the ’38 Ford truck’s proud owners had many reasons to make their vintage pickup better than the day it left the dealership for a little under 600 bucks brand new.

There is a very personal story behind the truck’s restoration and MyStarCollectorCar will share it with our readers in a future feature.

The final vehicle on our Icebreaker list was a 1964 Chrysler convertible that got a promotion during its restoration. We at MyStarCollectorCar need to thank Jan Michener from Michener Allen Auctioneering Ltd. for introducing us to the ’64 Chrysler’s colorful owner.

Look for the Chrysler convertible’s entire story in a future MyStarCollectorCar article.