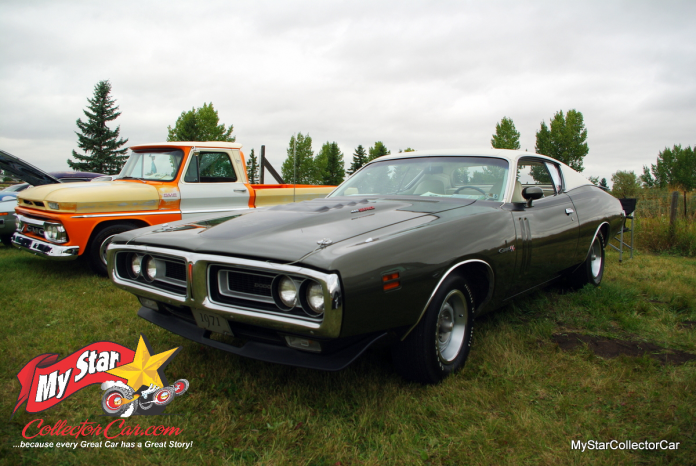 The definition of a survivor car is a moving target at best, but basically it means the car has survived intact and factory correct for decades.

This 1971 Charger RT is almost a survivor – except for the six-pack.

Jim Ross bought his ’71 Charger RT twenty years ago when, as he said, “prices for the 3rd Gen Chargers were a lot less”. He found this classic Mopar in Pennsylvania, but it had spent a lot of its time in Virginia so the climate was a lot less damaging to the B-body. Jim wanted an “actual RT” so he was very careful in his search plus he had an expert examine the Charger.

The car was originally purchased at a now-defunct dealership in Virginia called Pine Motors by a man named Alfred Henry.

This was a high-end car for the era, so Alfred ran up the retail price for the Charger with higher-end options like the AM/FM radio. Jim has a lot of paperwork for the car, but he’s missing the build sheet – even after a thorough search under every seat.

The Charger also passed Jim’s other test because the appraiser could only find one flaw in the body – an old war wound high on the driver’s side quarter. The rest of the car was very sound, but the interior paid the price because the plastic parts were, as Jim explained, “heavily damaged by the UV rays”.

Jim wanted to maintain the survivor status, so he saved the original panels and seat backs by sandblasting them and re-staining them himself.  The results were worth the effort because the interior looks mint and factory correct.

Jim saved the original vinyl roof by giving it a treatment every year, so it stays soft and pliable fifty years later.  There’s even a windshield inspection decal from the last year the Charger was in Pennsylvania.

The tires are correct bias-ply versions of the factory skins, but Jim has some radial tires in storage because the bias tires handle significantly different than radials. Jim runs the bias tires most of the time because he’s a student of history, but he does it at a sedate speed. He said the driving experience is a bit different because the brakes, “stop really good – once”. Jim described the power as “pretty good for an old car” because it can handle traffic speed and then some, with a great kickdown.

The Charger is thirsty because one of the previous owners installed the correct six-pack carburetor on the 440. This was a 4-barrel carbureted car from the factory, but Jim is happy with the upgrade because it was done with factory parts. He’s careful to explain the difference because he knows an expert could decode the car’s serial number in about twenty seconds. Jim said the factory exhaust manifolds: “were only seen on ‘70 and ’71 cars”.

The Charger came with a 3:23 rear end so it has the perfect combination of highway speed and acceleration. The fuel economy is another story but as Jim says, “It goes through fuel so much, old gas gets burned up pretty fast”. That eliminates a lot of winter storage problems with gas.