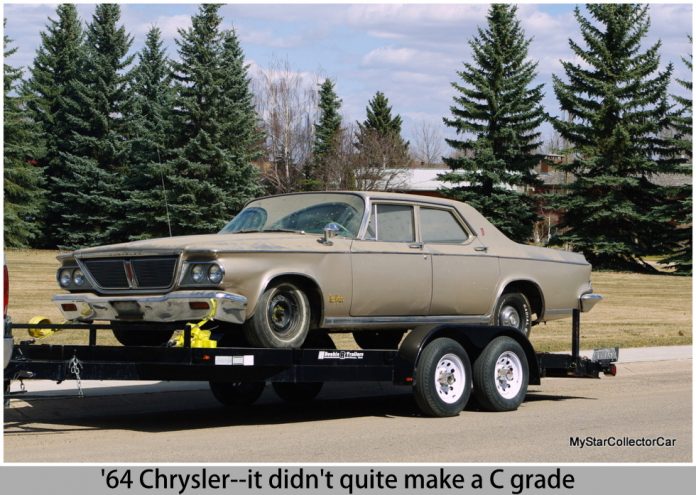 The 1964 Chrysler represented the last production year for both the design and body platform for these large Mopars.

There was no visible family link between a 1962 Chrysler and its 1963 successor, but there was plenty of similarity between the 1963 version of the Canadian Plymouth Valiant and the ’63 Chrysler models. In fact, the ’63 Chrysler models looked like giant versions of the Mopar Canuck compacts in 1963-and ’64 for that matter-give or take two extra headlights on the big cars.

Most 1964 Chryslers ran out the string as Mopar’s second biggest land yachts behind the giant Imperial models that were the official flagship in the company.

Few 1964 Chryslers have survived the test of time over the past 56 years. The cars came equipped with big block engines and their beefy powertrains became part of a hot rod project when the Chryslers reached the end of the line.

MyStarCollectorCar has attended hundreds of shows over the past 10 years and very few of them have 1964 Chryslers in any model on the guest list. These cars virtually disappeared off the face of the planet and few car guys had a strong enough interest to preserve their future legacy.

The unique body lines of the 1964 Chrysler represent the end of an era for Mopar because the 1965 Chrysler was another radically different version of the big car. 1965 was a year when Chrysler introduced the C-Body platform for its full-sized models.

Chrysler wanted to compete with Ford and General Motors because all three auto companies were determined to separate themselves from their early 1960s body styles and move forward into the back nine of the decade with newer, sleeker designs.

The ’65 Chrysler may not resemble the ’64 Chrysler in any way, shape, or form-but it does link rather easily with the style of the 1964 Imperial. The style influence of the ’64 Imperial on a 1965 Chrysler is abundantly clear when the two models are compared to each other.

It seems clear that Chrysler began its style movement toward the latter part of the 1960s with the 1964 Imperial models and their efforts were limited to their high-end Impys.

However, the differences between a 1964 and ’65 Chrysler were obvious then and now. The result is there are plenty of observers who would never be able to identify the two cars as members of the same automotive family if the 1964 and ‘65 models’ badges were removed from them.

Our best advice here at MyStarCollectorCar? Go crazy when you see a ’64 Chrysler because they are not plentiful these days and these cars are now rare stars.