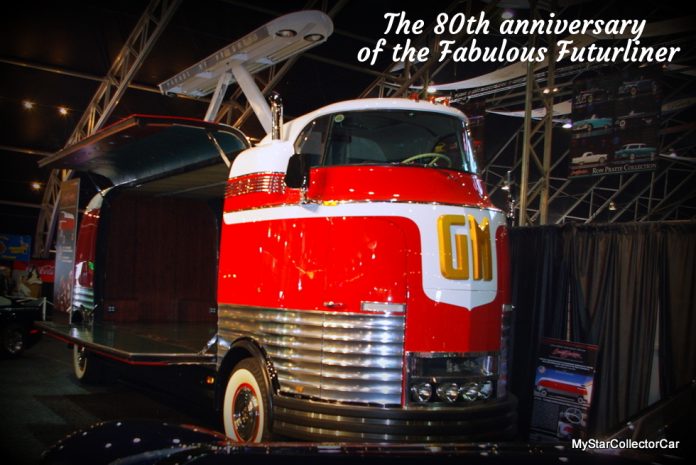 General Motors had a vision for the future when it built a dozen Futurliners (no “e” in the spelling) so GM would have a fleet of these large-and-in-charge behemoths as showcase display vehicles at major events across the US during the pre-war years.

The Futurliners were ready for the road by 1939 and spent the next couple of years as part of General Motors’ contribution to the Parade of Progress program.

The onset of World War Two was a game-changer for General Motors and the United States’ entry into the conflict in 1941 spelled a completely different future for the Futurliner program. The reality was GM became a large player in manufacturing military equipment and mothballed their Futurliner program.

The decision to retire the Futurliners continued until 1953 when GM retrofitted the vehicles and sent them back on the road.

The Futurliners’ original powertrains consisted of a four-cylinder diesel engine bolted up to a complicated four-speed manual transmission with four separate gear ranges that gave the big vehicles 16 shift choices to reach its modest top speed of about 45 mph (roughly 70 km/h for the metric set). Faster speeds were attainable if the Futurliners headed down a steep hill and the driver was an out-of-control daredevil with a serious death wish.

In the early 1950s, the Futurliners were retrofitted with then-current technology and their 1930s powertrains were replaced by 302 cubic inch six-cylinder gas engines bolted to four-speed automatic transmissions. The six-bangers only had a modest 145 horsepower, so GM added two extra rear end shift components into the mix and squeezed 24 shift choices out of the powertrain.

The net result was not exactly neck-snapping performance, because these giant beasts weighed over 16 tons so 145 horses worked very hard just to get the Futurliners moving on the road.

The reintroduction of the Futurliners in 1953 allowed a new generation of people to see these big buses after a long timeout necessitated by a world war that changed the game in a big way for GM. It would be fair to label the Futurliners as Retro-liners in the early 1950s because they were designed and built in the 1930s, but they still looked ahead of their time 66 years ago.

The fate of the Futurliner was ultimately decided in 1956 when General Motors ended their traveling road shows starring the mechanical giants. The ensuing 61 years included stints for two of the Futurliners as display vehicles for the Michigan State Police, one that ended up with Oral Roberts Ministries, and another that became part of the Goebel Brewing road show.

The best guess in car hobby circles is there are only 9 of the original Futurliner fleet left in the world. They are still wildly popular in collector vehicles circles so a Futurliner restored to its original configuration is worth at least 4 million US dollars in the market based upon the numbers generated by their small history of sales in the open market.

Consequently, the future looks very bright for any owner who has a Futurliner on their list of assets-if they want to sell their unique blast from the past for big money.