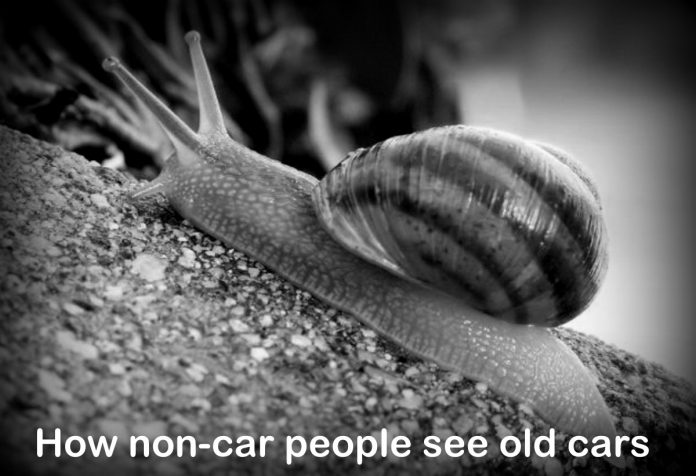 Every car guy and girl in the world experiences a strange reaction every time they get behind the wheel of their vintage vehicles on the road.

The typical reaction from other motorists is to hit the gas and leave the offending antique ride in the dust, so to speak. We at MyStarCollectorCar theorize that New Age drivers naturally assume that any old vehicle has a top speed of approximately 10-20 mph (roughly 15-30 km/h for those who only speak metric), consequently they are highly pass worthy.

The major flaw in this illogic is the simple fact most vehicles built over the past several decades are very capable of achieving much higher speeds than a horse, even the legendary Secretariat for that matter. Therefore, they are likely nudging or besting the posted speed limit, particularly on city streets, so any attempt to leave them in the dust may push the newer drivers well into traffic court appearance territory because they have seriously misjudged the capabilities of old cars in terms of speed.

The only X factor is the driver since some choose to drive like they will be shot at dawn if they approach the posted speed limit-let alone exceed it, but they already think life on the edge is travelling without a trailer for their retro rides. Fortunately, few car guys subscribe to this overly cautionary approach to driving their vintage rides because it was never the point.

MyStarCollectorCar would like to present a few modern interpretations of retro rides. Our purpose is to illustrate the huge disconnect between car guys and non-car guys when it comes to old iron.

The first vehicle on our list is any intermediate-sized domestic car built during the mid to late 1960s. These tweener cars were larger than a compact, but smaller than a full-sized sedan during their heyday. They also represented the muscle car in its best form when owners checked off the giant engine box on their option box at the dealership.

The intermediates offered a solid balance of size and performance for their owners, most of whom were younger and more than willing to wear out the gas pedal in their factory hot rods.

Nevertheless, the intermediates are perceived to be giant-sized boats in the eyes of non-car guys, despite the fact most modern trucks and many sport utilities are bigger than an intermediate-sized car.

Another broad non-car guy misconception is the issue raised earlier in this article: speed. Most non-car people assume every old car is incapable of today’s speeds on the road, so we added the photo of a snail to illustrate the irrational perception about old cars held by non-car guys.

Hot rods are another source of unwarranted conclusions by non-car guys. They are free-form creativity on four wheels and blend old school cool with a host of upgrades to the factory performance delivered by domestic auto builders.

Hot rods were typically built during a prewar era, so most fall within the non-car guy stereotypes in terms of overall speed when they remain in stock form. However, hot rod owners have a different plan when they build a retro ride and add more power under the hood-much more power in many cases.

Car guys see an amazing and wondrous vehicle created with a long list of new parts that made it stronger, better, faster, and cooler. Non-car guys see Herman Munster, or his European cousin built by Dr. Frankenstein. Metal monster concepts are very wrong conclusions when it comes to hot rods here at MyStarCollectorCar.