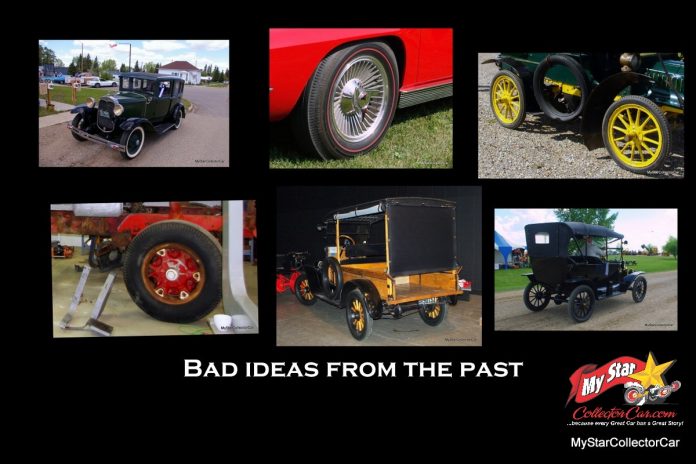 Cars have an incredible history.

The evolution of automotive technology over the last 100 years has been phenomenal and most (but not all) ideas have been excellent.

The ideas that failed did it in spectacular fashion.

Wooden bodies are a good example. Wood was used in the infancy of the car’s history, because carriages and buggies were primarily wood, so a carriage builder could easily build a horseless carriage.

The other reason wood became obsolete is simple–woodworkers with the skills to build wooden car body frames became scarce. Outdated skills are the same reason you don’t see a lot of blacksmiths in 2021.

Knock-off wheels were another bad idea. These wheels made sense at places like LeMans where a quick pit stop meant the difference between winning and losing.

They made less sense on a freeway when your left rear wheel passes you in the fast lane because you didn’t tighten your knock-off wheel after that last flat tire.

Canvas tops were very common 100 years ago, but let’s be honest–we were a lot tougher back then. A canvas top is a great idea on a nice July evening, but it’s a nightmare on a January evening in a place with real winter.

The canvas top was marginal in rain–especially if you were too cheap to pay for add-on side windows. A full-scale blizzard could easily turn into a life and death situation if you had a canvas roof and no windows.

Front cowl-mounted gas tanks were a terrible idea. If the head-on collision didn’t kill you, the fiery explosion would finish the job.

Purists will point out how the gravity feed gas delivery was an obvious reason for the front-mounted tank–but you can’t help believing the engineers behind this system factored human barbeques into the equation.

Wood spoke wheels were another terrible idea. They were hard to keep straight, and they degraded a lot faster than good old steel wheels.

Historians will point out the obvious historical connection of these wheels to the stagecoaches, but you could successfully argue the car companies clung to the wood spoke wheels for a decade too long.

Split-rim wheels were at the top of the list of bad automotive ideas. They were used on trucks primarily and there isn’t an old-time tire guy on the planet who doesn’t have nightmares about exploding split-rim wheels.

Fixing a tire on a split-rim wheel has now become a rare sight, because the equipment to handle them is so specialized and the insurance risk is so high, nobody will touch them. It’s kind of like asking for bomb squad volunteers.