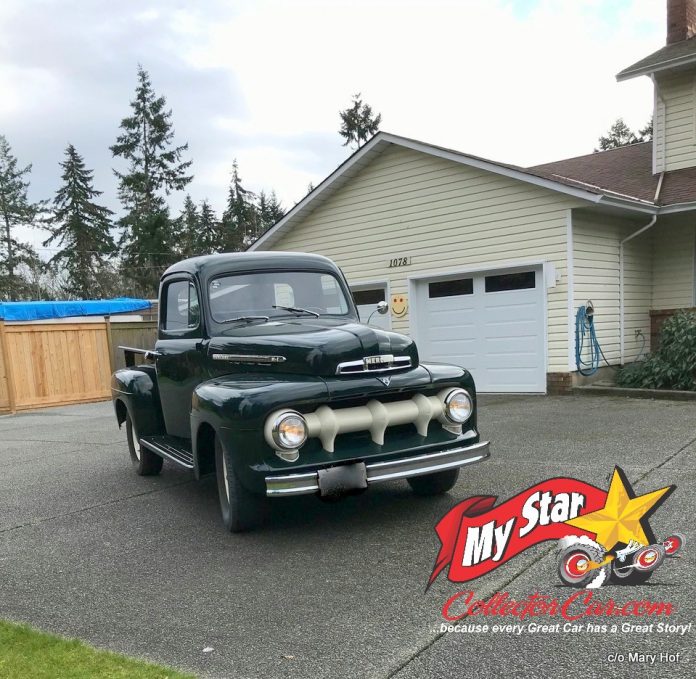 Many of our non-Canadian readers may be puzzled by the title because Mercury trucks were only built for the Canadian market during their 1946 to 1968 production run in the land of ice and snow.

Gerry was a kid when his father bought the truck to use on the family dairy farm, along with extra duties as a family hauler when it was needed in that role. A 1951 Mercury M-1 pickup was essentially a rebadged Ford ½ ton truck, so the M-1 designation was the equivalent of a Ford F-1 pickup at the time.

Every farm operation requires hard work and a practical nature for success, including vehicle use that serves a purpose. Gerry’s father used the Merc on the farm, as well as a transportation vehicle for his six kids in the back of the truck, so the ’51 Merc truck earned its keep during Gerry’s childhood.

Farm kids from a bygone era learned how to drive at an early age, including Gerry. He mastered the ’51 Mercury truck’s three-on-the-tree manual transmission early in life and the driving lessons continued into his teenage years.

In fact, Gerry passed his driver’s test in the old pickup and even used it as transportation to his high school graduation for him and his date.

Many of Gerry’s milestones in his journey from childhood to young adulthood included the old Merc, so he was sad to see the truck get banished to a forgotten area on the farm when it could no longer handle the hard work on the farm.

The truck may have been out of sight, but it was never out of mind for Gerry, even as he moved through life as a young man with a family of his own.

Eventually he reached a point in his life when he decided to rescue the old pickup and breathe life back into it. Gerry was smart because he talked over the idea with his wife Mary in 1998 before he preceded on his long project.

Mary had a little trouble envisioning the restoration process because the old truck was in total disarray when Gerry approached her about the truck. Nevertheless, she understood that Gerry was bonded with the truck because it represented so much of his early life, so Mary gave him a green light to proceed with its total restoration.

There is never an easy road to the project’s finish line for car guys, including Gerry. In 2020, Gerry realized he needed to employ the services of the pros to complete his long process because he wanted to drive it before it was too late for him to drive his beloved truck.

The happy ending occurred in the spring of 2021 when the 1951 Mercury truck finally hit the road again after so many years rusting in pieces on the family farm.

Gerry and Mary want to share the memories with their grandchildren, plus they want to build some new ones with the kids.