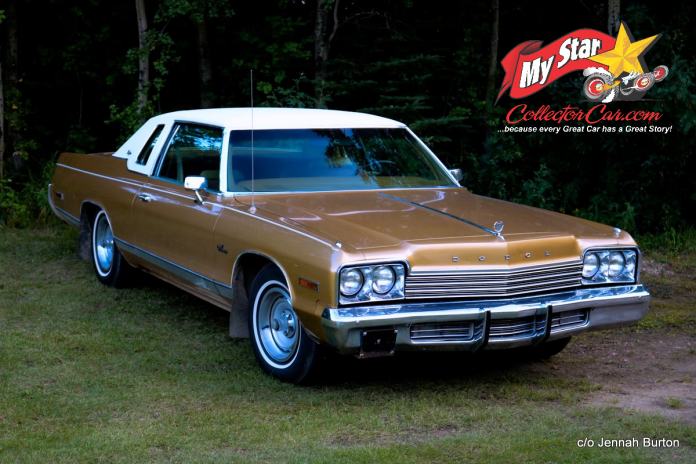 A 1974 Dodge Monaco two-door hardtop is not common on today’s roads.

The 1974 Monaco had a brand-new look to celebrate the occasion as the new flagship for the Dodge brand. Many older MyStarCollectorCar readers will recognize its style from the iconic “Bluesmobile” because the movie car was a four-door version of the ’74 Monaco.

The aforementioned historical information was not part of Jennah Drysdale’s decision to purchase her 1974 Dodge Monaco Brougham from its original owner. Jennah was familiar with vintage cars but she “wanted something different” in her words, so a ’74 Monaco was an excellent choice because very few people from any age group own one in 2020.

The original owner had a very fair asking price for the Monaco-but he wanted the car to go to the right person. Jennah recalled the test drive was an interview process where she answered questions about her intentions for the car.

Previous candidates had outlined their game plans, including a desire to slam (lower) the Monaco and change the color on it, among other schemes that made the previous owner reject them as the potential owner.

Jenna wanted to “preserve the integrity of the car”, in her words, and she made this point very clear with the former owner. After all, the 1974 Dodge Monaco was an original and well-maintained car that still had its original decals, paint-and even upholstery under its seat covers that were installed shortly after the car left the dealership.

Jennah wanted a big car from the past and looked at a 1969 Cadillac before she spotted the ’74 Monaco on an online buy/sell site.

The asking price for the vintage Mopar was very fair, plus the car was pampered by the former owner. Jennah admitted she was too young to have even heard of a Dodge Monaco so she did some research on the car to understand its model history.

Jennah added she was immediately taken with the big Dodge from the moment she saw it. In Jennah’s words: “When I saw it, I said Wow, I gotta have that car”.

Jennah became only its second owner last summer (2019) and began a learning process with her 1974 Dodge Monaco. The car was in a state of semi-retirement over the past several years, so she was only able to put about a thousand miles on it during her brief period as the Monaco’s second owner.

The process included fuel issues that compromised the carburetor on the Monaco and created a leak when the new gasoline ate through the carb’s innards. Part of the adventure found in old cars is their ability to leave their owners on the side of the road and Jennah is no stranger to this experience with her Monaco.

However, she is still going through a learning curve with the car and is willing to solve the problems as they present themselves to her and grow into her role as the proud new owner of a 1974 Dodge Monaco.

The most important part of the equation is Jennah’s desire to keep her car as original as possible along the way.

OCTOBER 2014 CAR SHOWS AND EVENTS-PLEASE TELL US ABOUT YOUR CAR...