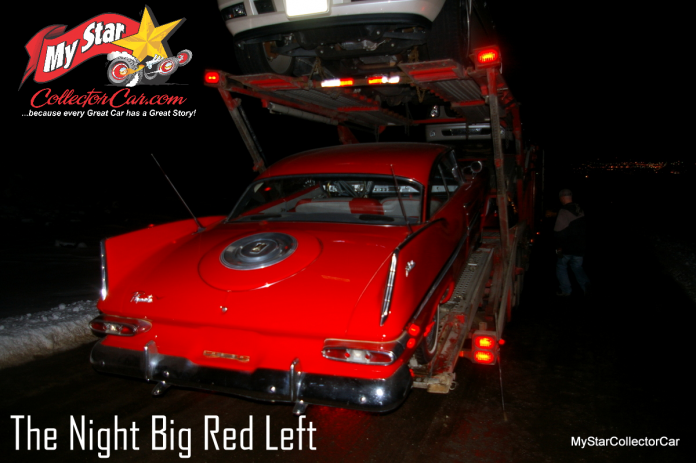 There’s always the ‘one that got away’ – it could be a girl, a hot stock tip or a real estate opportunity, but this is an e-zine about a specific subject so the answer is obvious.

It’s about a car.

Veteran MyStarCollectorCar readers know about a restoration project I took on back in the 90s. It was a 1959 Plymouth Belvedere I called the Restoration from Hell. The movie ‘Christine’ was a jumping-off point for many fin-car fans, but I was a disciple of the Mopar fin long before the movie (or book) came out.

I focused on the ’59 Plymouth because my dad had one and some of my earliest car guy memories trace back to his ’59 Plymouth Belvedere 4-door sedan. I found a ’59 Belvey two-door hardtop in 1990 and immediately paid too much for it.

The ‘59 was what car guys fondly call a bondo bucket and the 318 was tired, so ten years flew by before the Plymouth was back on the road. I met a lot of characters over those ten years – some good guys and some lowlifes, but it was all part of the learning curve. The problem was simple. This car was way past my skill set, so I had to throw my wallet at it for the bigger stages.

Some of it was my fault. For example, I didn’t dig in on the initial stages of the project where I wanted to separate the body from the frame in my garage. Instead, I let a sketchy ex-con with major biker connections do that for me and several thousand dollars later, I had a cut-up car separated from a frame sitting in a leaky granary 25 miles out of town.

There’s a section in the archives of MyStarCollectorCar that will fill in the blanks on the gory details of this build, but this is the Reader’s Digest version. Basically, I found the right guy to finish the massive amount of bodywork; I found parts; I had a pro do the engine rebuild and the ’59 hit the road in 2000. I spent the last year finishing off the build with all the little details like wiring and bolting everything together.

It was a cool car. I went off the program with color and chose Viper Red but skipped the white roof because too many people were already calling it Christine. I didn’t want to aid and abet such a complete lack of imagination by adding a white roof.

There are many reasons why guys sell beloved cars. In many cases, it’s a byproduct of a messy divorce; sometimes it’s for health reasons and in the worst-case scenario — it’s an estate sale.

My reason was far less dramatic. I started a business and once that happens, your beloved old classic transitions from ’59 Plymouth to asset. Nobody puts a gun to anyone’s head to start a business (maybe in China or in the Mafia) but generally it’s an eyes-wide-open choice.

I’m not going to dwell on the trajectory of the past business, but I can say it was the primary reason the Plymouth was sold to a guy in Montana.

Selling a car isn’t like ending a human relationship, because typically there are many good reasons to sever ties with a person — but in the Plymouth’s case there was only one reason. It was an asset in a business.

I can tell you this — it’s not like selling the family’s Honda minivan after it gets too miled-out. The Plymouth represented a whole decade (the 90s) of blood, guts and no vacations to get it done. There were a few things left to do on it, but the ‘59 was close to where I wanted it. I have many photo files of the ‘59 and occasionally they pop up in searches – you’ll see some of them on MyStar pages.

That’s the difference between an old car and an old girlfriend. You’ll always keep pictures of your old car, but if you keep massive files full of pictures of an ex-girlfriend or wife, you probably need intensive counseling.

Real life is nothing like a country song where you can pine about loss forever…unless it’s about an old car.

I never called the ’59 Plymouth Christine, but I did give it the most unimaginative name I could. I called it Big Red. I remember when Big Red was loaded on the hauler and suddenly all those country songs about pain and loss made sense. I even came up with a name for a country song about it – ‘The Night Big Red Left’.

Car guys will get it – it’s like an automotive version of your dog dying.