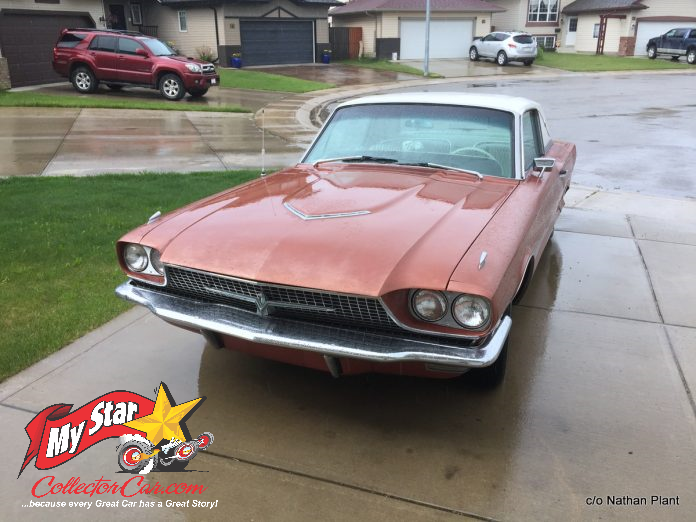 Car guys are always talking about their first car.

The first car was usually something practical and affordable but very few were over 50 years old.

Nathan Plant knew his first car wasn’t going to be a gently-used Toyota because he’s a self-described “old soul”, so a 1966 Thunderbird made a lot more sense as a first car. Nathan is 17 years old so the odds are pretty solid that he is the youngest ’66 T-bird owner on the planet. He recently made his T-bird a guest at his high school graduation, so the big Ford is already a big part of his biography.

The 86,000 original-mile Thunderbird wasn’t his first choice but it was in his price range so he looked at a number of vehicles before he bought this Ford classic. Nathan is a hands-on guy so he took the car to his high school shop and worked on the car under the close watch of his instructor.

Nathan said the car was “all original and in pretty good shape – no rust” and the original 390 cubic inch V-8 was rebuilt so he had a solid foundation for a daily driver. He thinks the car came from a dry climate and it had several owners but he said, “all of them took good care of it”. Nathan did the brakes and a few other things before he hit the road in his 54-year-old daily driver.

‘Hit the road’ is an understatement because Nathan ran up 8000 miles on the car from late June until late fall when he grudgingly put the car away for the winter. The Thunderbird got him to work every day and it was full of his buddies on his days off.

Nathan adapted quickly to the reality of driving old iron because he had to learn how to run without a speedometer (another box to check on his winter to-do list). Instead, Nathan said he simply “keeps up with traffic” so he never runs into problems with law enforcement. His only real concern was that the car “pulls a little to the right” on the highway so he added that to his winter project list. He also wants to fix the sequential rear signal lights because they are such a fundamental part of the car’s heritage.

The Thunderbird never gave him any problems so he went through a whole summer with none of the typical issues like overheating or vapor lock. His only real issue is mileage because his 390 is a thirsty engine so his miles per gallon measures in single digits and Nathan estimated his monthly fuel bill was “about 300 dollars a month”.

The mileage is the downside to the T-bird but the upside is the attention he gets in the car. Nathan said, “It was a blast to drive it and run with the windows down on a nice day” and his buddies love the experience so his summer behind the wheel of his self-described “pride and joy” was incredible. He’s an old school young guy in one other way – he rigged in a Bluetooth system and – you guessed it – he only plays classic tunes in his classic car.

Very few first cars were ever this unique and cool. He’s going to learn more about his ’66 Thunderbird and do some upgrades over the winter but he summed up his first T-bird summer perfectly.