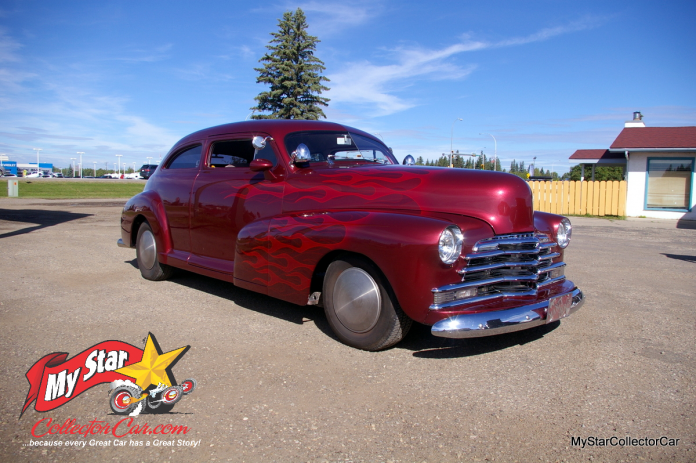 The post-war era for domestic cars built in 1947 was similar to the early WWII era because the cars were not markedly different from the early 1940s models.

The war effort put cars on the backburner so North American car builders could concentrate on military production.

Marty Dukart became the proud owner of a 1947 Chevy Stylemaster 2-door sedan about 40 years ago and decided to mold his car into a custom masterpiece. Mission accomplished in our opinion here at MyStarCollectorCar because Marty transformed his ’47 Chevy into one of the coolest custom rides in his area.

Marty told MyStarCollectorCar he bought the Chevy “because it was cheap”, then he added “it wasn’t much of a car” when Marty purchased it. In fact, it was missing most of its glass, save for the rear window.

It would be fair to say the car needed plenty of work before it could be ready for the road. Marty wanted to build a one-of-a-kind custom and he succeeded at his task when he resurrected his ’47 Chevy.

He was able to incorporate a 1966 Chevelle sub-frame into his build and slammed the car about 3 inches in the process. Additionally, he chopped another 3 inches out of the roofline to give the car a sleeker look. The process included a measurement process with Marty’s wife so he could determine how much room was left between the top of her head and the roof.

The chopped roof meant the Chevy now required a custom windshield so Marty sought out the services of a local windshield guy who told him “we can do anything” –and the glass guy was right about his shop.

The seats in the car were original-but were little more than metal frames with springs when Marty bought the Chevy. Marty’s wife was able to work her magic on them and refurbished them, along with the door panels. The result is an excellent blend of a comfortable retro interior with a mildly custom flair.

The Chevelle subframe gave the car a better ride and allowed Marty to transplant a Chevy 350 small block engine and 350 automatic transmission into the ’47. The previous engine in the car had over 100,000 miles on it because Marty and his wife drove the car everywhere to attend car events.

Marty recalled one car adventure in which they found themselves in the middle of a Montana mountain blizzard on their way to an event. The snowy experience did not slow them down in the least and the two of them continued to roll up miles in their ’47 Chevy custom.

Marty told MyStarCollectorCar the car was last painted about 10-12 years ago, but it looks like a newer paint job, complete with custom flames on the front end.

These days the 1947 Chevy does not see as much time on the road since Marty purchased a beautiful 1964 Pontiac convertible, but he tries to “squeeze the car in whenever I can”, in his words.

And who can blame him?