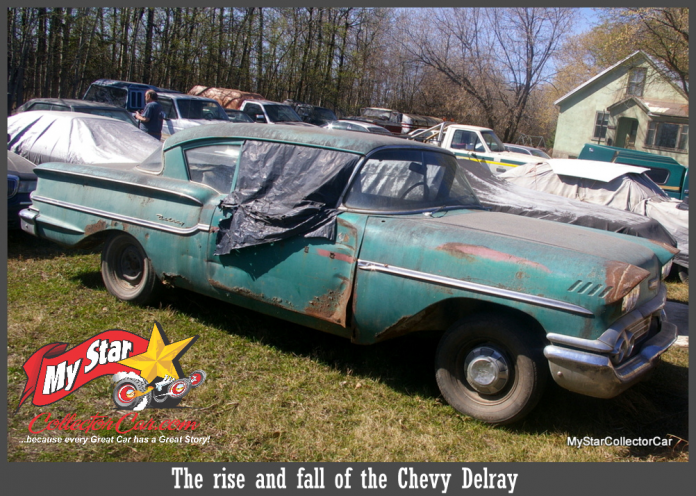 There was always a pecking order in yesteryear’s car models, a trend that is less visibly obvious in today’s world unless the creature comforts and new age electronic gizmos are missing in action on a new car.

Take away massive amounts of chrome bling on the exterior of the car, along with whitewall tires, and you had the most affordable cheapskate car on the block.

Chevrolet was no exception to this rule and offered its car models on an escalating scale where shiny trim was scarcer on its lower priced vehicles, including the not-so-famous Delray models.

The Delray brand name debuted in time for the 1954 production year at GM and it practically screamed average during its five-year production run from 1954 until ‘58 when it was given a mercy killing by the fine people at Chevrolet.

Just for the record, the Chevy Delray was not even the bottom rung on the ladder. That honor belonged to the 150 series, while the Delray was a tweener associated with the 210 series and offered a slightly better interior than a basic 210 model.

The leaders of the pack during the Delray’s early years were the pricier Bel Air models, later to evolve into the legendary Impala by 1958, a then-new and iconic Chevy model that presided over the death of the Delray that fateful year.

As mentioned, the Delray was not the lowest model in the 1954-58 Chevy lineup and provided an affordable way for customers to prove they spent a little more coin on their purchase, including a vinyl interior choice that could be color-matched to the car’s exterior.

Additionally, the Delray could be purchased with actual carpet on the floor, but it was only built in two-door post versions during most of its short production run.

A two-door post car built in the mid-50s may have offered practical affordability during that period, but it was not the best choice for parents who really needed extra doors so they could better store their large herd of kids in the back seat of their sedans. Unfortunately, extra doors cost more coin for budget-minded buyers.

Consequently, delusions of four-door grandeur had to be parked in favor of a slim list of options when Chevy loyalists bought a Delray back in the day, although the 1958 Delray offered 4-door sedan and wagon versions, along with a panel delivery model during its final year.

Even the 1954 Delray models could be purchased with the 2-speed Powerglide automatic transmission, but most buyers chose the humble three-on-the-tree manual transmissions because of their lower cost.

The Delray has always been hidden in the shadows of the Impala and Bel Air models during its heyday in the Chevy lineup, but it has become an interesting platform for resto mods largely because of its two-door sedan configuration.