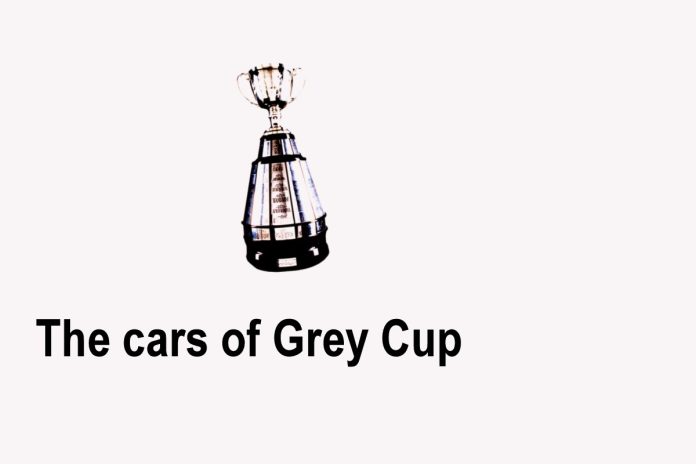 The first Grey Cup was played in 1909 and there have been 108 Grey Cup games since then.

That’s great, but this is a car guy e-zine, so what’s the connection between cars and football?

The 1956 Grey Cup featured a clash between the Edmonton Eskimos (now Edmonton Football Club—or Elks—or some kind of deer) and the Montreal Alouettes. More importantly, it featured a 1956 Triumph TR3.

This TR3 was the prize for the Outstanding Player Award. For the record, the Edmonton Eskimos/Football Club/Elks won the game 50-27.

The 1961 Grey Cup featured another British sports car. Miss Grey Cup was presented with a brand-new MGA as a prize for winning the contest.

The Winnipeg Blue Bombers beat the Hamilton Tiger Cats 21-14 on December 2, 1961, but the real winner was Miss Grey Cup because she drove away in a classically British MGA.

The 1963 Grey Cup program featured an ad for B/A (British American) gasoline. B/A stations were all over the country in ’63 but the B/A marketing guys were smart.

Their ad in the ’63 Grey Cup ad featured a two-year-old used car in the form of a 1961 Ford four-door sedan. The message was simple—the average viewer of a Grey Cup game didn’t drive a Rolls Royce. He drove a used four-door sedan.

The 1973 Grey Cup between the Edmonton Eskimos and the Ottawa Rough Riders featured a 1974 Datsun 260Z. Yes—they were called Datsuns—not Nissans back in ’73.

‘74 Datsun Z cars were the first ones with the bigger 260 engine, largely due to extra pressure of higher smog standards versus lower horsepower numbers. Ottawa won the game 22-18 and Rough Riders’ defensive player Charlie Brandon won the Datsun—no word on whether he fit behind the wheel.

The 1978 Grey Cup was played in Toronto on November 26, 1978, and it featured the Edmonton Eskimos (pre-Elks) against the Montreal Alouettes. The Eskie-Elks beat the Als 20-13.

The program had a big two-page ad for the 1979 Chevrolet lineup. There was a big lineup of models on the pages, including the Chevette, Nova, Caprice, Monza, Malibu, Camaro, and Corvette. This disco era may have featured lukewarm Chevys, but some of the models were–or became legends.

The 1982 Grey Cup program was another game with the Edmonton Eskimos/Football Team/Elks pitted against the Toronto Argonauts. Edmonton won 32-16 thanks to future CFL and NFL Hall of Fame quarterback Warren Moon.

This one was called the ‘Rain Bowl’ for obvious reasons, but the program showcased the 1983 Chevrolet Cavalier in a two-page spread. The Cavalier was in its second year of a long run that lasted until 2005. Warren Moon’s run was a lot shorter but equally successful.

MERRY CHRISTMAS… A SENTIMENTAL CAR AD SHOWS WHY THIS DAY IS...