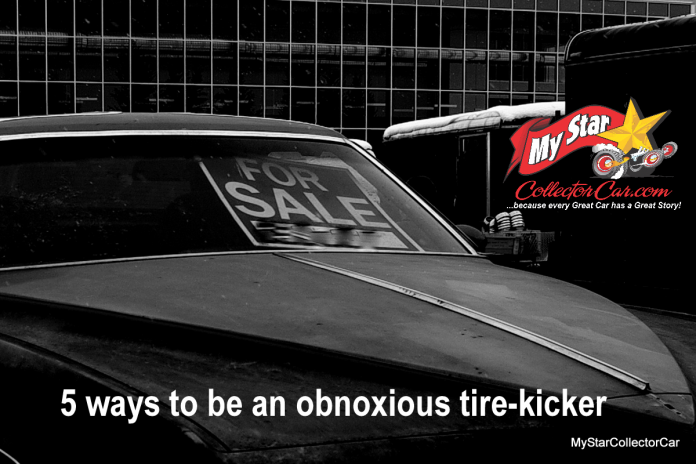 The world will never run out of its abundant supply of boneheads.

This simple observation applies to every aspect of life where people interact with other people and produce moments of conflict that range from a basic social indiscretion like zero manners to an all-out conflict in which warring super powers test out their nuclear toys in actual combat.

MyStarCollectorCar has been on both sides of this fence, both as a buyer and seller, and we have enough experience with boneheads masquerading as car guys to form a strong opinion about this vehicular misadventure.

Therefore, we want to add five highly effective ways to severely p*** off a car guy who is trying to sell his vintage ride.

The first way to anger-up a car guy is asking a stupid question such as how many miles are on the old warrior. An antique vehicle is not a modern used vehicle where its odometer readings are important in that daily driver way. Consequently, it is correct to assume a miled-out daily driver is a liability to most potential new owners because of its important role in their everyday lives.

On the other hand, a vehicle from the past is a fundamental principle of the car hobby philosophy and should not be judged by the miles on it. Any questions about the old ride’s total miles mean the potential “buyer” is simply a tire-kicker whose main hobby is wasting the seller’s time because most authentic car guys are more concerned about the condition of the vintage vehicle.

The second way to irritate a seller is ignore the information in the ad. For example, a roller means the old vehicle has no powertrain in it, so any questions about how its starts and drives means the moron asking the question does not want to use the vehicle to attend MENSA meetings-unless the old car comes with a team of horses.

A third surefire way to bring out the worst in a seller is to make bird bath-shallow promises about an appointment to see the vehicle. The seller will not be thrilled when flakes (aka tire-kickers) do not show up to view the vehicle where they can make actual person-to-person contact with the owner of the vintage vehicle.

These misfits either lack the courage to be honest with the seller-or they enjoy wasting the seller’s time while hiding behind a keyboard or cell phone. Either way, they have added a significant increase to the seller’s levels of cynicism by their misguided actions.

A fourth way to ignite the anger in a vintage vehicle seller is a stink bid. A stink bid is an insultingly low offer for the vehicle that once again takes place behind the anonymity of a keyboard or cell phone. The offer is presented by a vile form of tire-kicker who has no intention of buying the vintage ride-unless these lowlifes win the lottery of good fortune wherein the hapless seller falls for their lowball bid. Reality 101: this idiotic move is an incredibly long shot for the tactless tire-kickers.

MyStarCollectorCar would strongly advise potential vintage vehicle buyers to avoid the five scenarios in the list because nobody should rub elbows with the misfits who use these shabby tactics and try to pass themselves off as car guys.

Newsflash: most real car guys would rather run their beloved old rides over a cliff than sell them to these bottom feeders.