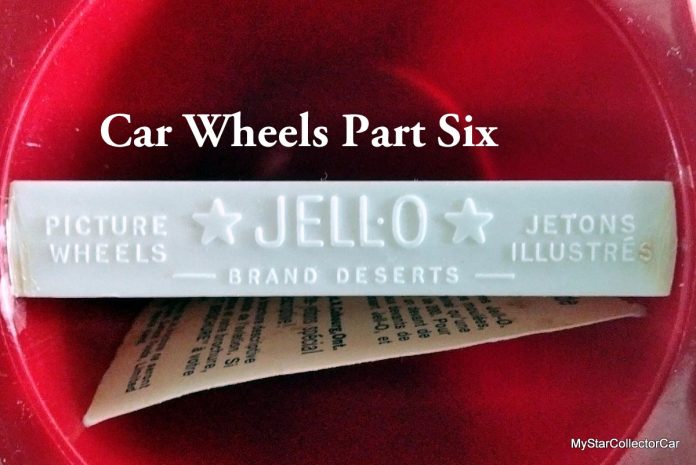 MyStarCollectorCar readers have followed our Jell-O Car Wheels series in a big way since our initial article explained how their popular pudding products were an even hotter item for car kids during the early 1960s.

The Jell-O collection included 200 cars that ranged from the late 1700s until the early 1960s, a then-modern era for vehicles during the pudding company’s 1961 marketing campaign.

A 1940 Pontiac station wagon is the first member of our esteemed World War Two list on Jell-O cars built during the Forties. The ’40 Poncho long roof was also a Woody wagon and left the GM factory bedecked with mahogany trim. The Jell-O Fact Book indicated the wagon was produced in limited numbers, a fact borne out by the fact we at MyStarCollectorCar have never seen one in the flesh-or in metal and wood to be more accurate.

The 1941 Oldsmobile convertible was also included in the Jell-O Car Wheels collection, and it was a unique car, according to the pudding people who selected it. The ‘41 Olds drop top was offered as a four-door, along with an automatic transmission option for the first time, so it was a niche market car that had an intriguing style and legacy that commands big bucks in today’s collector car market.

Tough times were ahead with the United States’ formal involvement in World War Two after Pearl Harbor, so it was no surprise when Detroit automakers stopped producing civilian vehicles in 1942 and instead solely concentrated on military manufacturing.

Nevertheless, 1942 offered buyers a few choices before their factories changed horses that year, including the stylish ’42 De Soto, a car with hideaway headlights that was not produced in great numbers due to the onset of World War Two.

Current owners of 1942 De Soto 4-door convertible are a small but very lucky group of people because of their extreme rarity, so the Jell-O pudding people hit a home run when they included one in their Car Wheels lineup.

The end of World War Two was a major moment for celebration in the free world, particularly in the United States because of the country’s huge investment in both people and technology to achieve victory for the good guys.

A small domestic automotive builder named Kaiser-Frazer celebrated the end of a brutal war with its 1946 Frazer, a unique car that had a sleeker, more modern design that was years ahead of its Big Three rivals in terms of a more contemporary style.

The ’46 Frazer got to the early 1950s style long before the big dogs even got to the start line and deserved a place in the Jell-O Car Wheel lineup.

MyStarCollectorCar’s fifth and final addition to Jell-O’s pudding cars built between 1940 and 1949 is the ’49 Buick Riviera in its two-door hardtop version, an exciting new feature for Buick that year. The absence of a B (center)-pillar allowed a cleaner, more open air look for cars and allowed car builders to coin the “hardtop convertible” term, a handle that was later shrunk to the more familiar “hardtop” name.

DECEMBER 2017: A FAMILY TRADITION OF CAR GUYS CONTINUES WITH A...