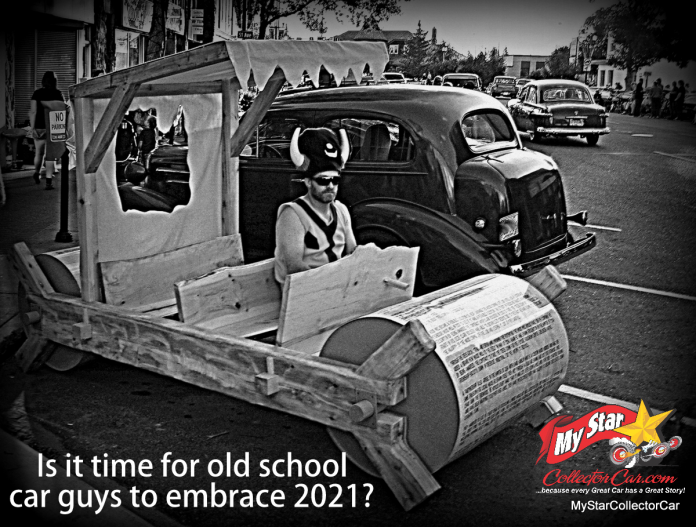 MyStarCollectorCar is solid proof that old dogs can learn new tricks because our online publication is part of the new era of electronic communication-and we learned how to engage the new cyber world just 12 short years ago when we fired up for the first time.

There are still stubborn holdouts who refuse to embrace the new reality of the vintage vehicle hobby and the vital nature of very basic computer skills when it comes to success on the ‘Net. We at MyStarCollectorCar congratulate these renegades for their strong-willed refusal to join in the e-world reindeer games, but we also view them as 21st century versions of the last non-Amish guy to own a team of horses instead of a horseless carriage.

Most of these cats can rebuild a carb in their sleep, but they refuse to engage in a less complicated online world where basic computer skills can be learned in an hour. We don’t get it, so we are prepared to offer five good reasons why holdout car guys need to expand their horizons on the ‘Net.

The first good reason is most of these cats are already connected to the e-world through another person who does the legwork for them. This game plan is a weak argument about their old school approach to the hobby because the minute they use another person to access the ‘Net is the exact moment their argument holds as much water as a sieve.

They are already accessing the ‘Net so the only reasonable course of action is to learn how to use a laptop or smart phone and do the electronic leg work themselves. We estimate the learning process will take about 1/100 of the time it takes an old school car guy to do a brake job.

We at MyStarCollectorCar have also discovered most car guys now carry a cell phone (even the cyber-world holdouts), so they already have access to the ‘Net. Which brings us to our second reason: These cats are already in the Internet neighborhood with a cell phone and just need to use their phone to access the information. They can even gain access to the Internet via verbal commands if they hate typing on the little keyboards.

The third reason is the giant world of the Internet. A stubborn car guy who chooses to avoid the new electronic highway has also chosen to shrink his world to his local car community for access to parts and advice that are relevant to his build project. The world gets even tinier if the project vehicle is rare, obsolete, and unpopular in the car hobby, so good luck with the local plan if you’re a holdout car guy.

The fourth reason for joining the 21st century car hobby world is the visual side of the equation. It is extremely likely that somebody has taken a photo of the object of interest and posted it on the ‘Net. The list of possible pics is endless and will help fill in the blanks for car guys for every topic, ranging from identification of vehicles to position of parts on a vehicle- and everything in between.

The fifth, final and best reason for car guys to embrace the new Internet world? MyStarCollectorCar can only be found in e-editions on the ‘Net and we have a brand-new article every day of the year in our large Daily Feature position at the top left of the front page. Along with thousands of other articles written by us over the past 12 years because a print version would make ‘War and Peace’ look like a pamphlet.

Good thing they can be easily squeezed into our e-zine.