Lifetime impressions are probably the most important facet of any relationship.

If you’re the kind of guy who needs to bolt back 24 beer with rum chasers to “meet the folks” then you’re probably not going to be a poster boy for lifetime impression protocol.

Cars don’t follow the same “lifetime impression” rules because the owners are a bigger factor in the human/car interaction but the equation is simple.

These are cars you’d love to own because the combination of owner and car made the 1st mark on the squeaky clean chalkboard of a young kid’s mind.

In other words, the car is a factor in the equation but this list of my “Lifetime Impression” vehicles is so varied that it clearly points at the person-not the car.

I grew up on an acreage in the country during the 1960s and we had one really bad TV channel. The TV entertainment options for a kid were limited to occasional bursts of classic TV like F Troop or The Munsters.

A passion for cars filled the gap…

We had a number of visitors because my parents were great hosts and city folks liked to get out in the country so there were some memorable rides coming up the driveway for a car kid to analyze.

One of the first cars that really left an impression was my Uncle Don’s ’58 Chevy wagon. He drove a 1950 Ford 4-door sedan for what seemed like two lifetimes to a kid and then one day he showed up in a 1958 Chevrolet station wagon. There’s no way that a kid could make the obvious leap of logic that Uncle Don had a large family and the wagon was non-optional. To me this Chevy was just a weird shift in my small universe. 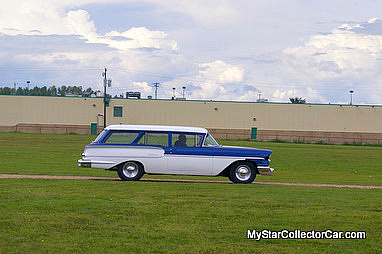 Uncle Don was a combat veteran in World War II and in the mid-60s we did our best to impress him by staging war games when he stopped by the house. He’d watch patiently as we died a thousand spectacular deaths in an attempt to impress our war hero uncle. It was full-out popgun and toy machine gun carnage and to Uncle Don’s credit, he never pointed out that you don’t actually get up again when you’re a casualty.

He liked rough and tumble kids – that’s probably why we got a pass, plus he was an excellent uncle so that’s why the ‘58 Chevy wagon left a lifetime impression…Uncle Don’s signature car. I’d own one just to remember a great guy.

The first pony car I ever saw was not the ‘64 Mustang. It was a brand new ‘64 Valiant Barracuda and I saw it when one of my older sister Shona’s friends drove it out to the acreage. Her name was Rella and she was Hollywood good-looking to a ten-year-old kid. 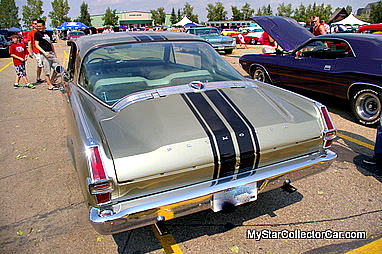 Here’s the confusing part because I really dug the Cuda’s fastback look, but the fact that Rella drove this pony car took this car to legendary status in my adolescent (and adult) mind. Naturally the big question was pretty basic. Any ten-year-old kid could figure out how to drive a ‘64 Barracuda but hypothetically, how many would know what to do with Rella? Nevertheless the 1st Gen Barracuda will always be one of my Lifetime Impression cars for 2 reasons.

Learning to drive is always an adventure but one of my most memorable attempts came from behind the wheel of a ‘56 Studebaker. Vince was a friend of my older brother Bruce and he often bought his Dad’s ’56 Studebaker out to the acreage. One day when I was 12, he decided to give my twin brother Jim and me driving lessons in the old Studie. 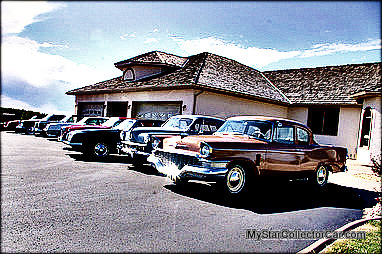 This was a three-on-the-tree car and neither one of us could master the hand-eye coordination to get the old brute moving forward. How the clutch never blew up that day is a mystery to this day but the smell was intense.The older kids in the neighborhood were merciless about that incredible and profound lack of skill behind the wheel. I need to own a ‘56 Studebaker just to prove that I can move one without burning up a clutch.

My brother in law Al was courting my sister Shirley in the mid-60s and he came well armed for the battle – he showed up in a 1964 Dodge Polara 500 two-door hardtop. This was a 383 4 barrel, bucket seat, and console equipped Mopar classic. He launched himself into brother in law Hall of Fame territory when he took us out for a run in the big Dodge.

Al punched it to merge on a highway, the big block kicked in, the dual exhausts growled and the 4 barrels put the Polara in Warp Drive. We came from a strictly functional, 4-door sedan base V-8 family so this flashy and highly impractical Dodge 2-door coupe with a tweaked big block was like something from Mars.

That Dodge Polara skated into Lifetime Impression cars because Al demonstrated that cars can be form over function.I’d own one as a tribute to a great brother-in-law and to feel just how mighty that 383 was from behind the wheel. 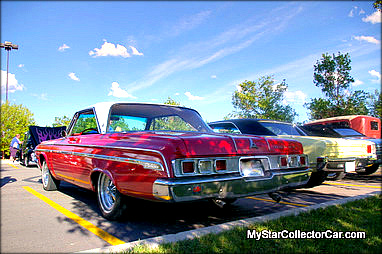