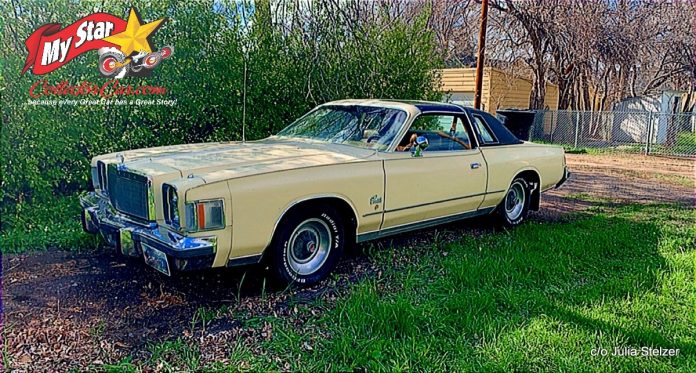 The first-generation Cordoba was a big step for Chrysler because it was their first foray into the personal luxury car arena.

These cars made a huge splash in their 1975 debut, but Julia Stelzer was born decades after Ricardo Montalban pitched the “fine Corinthian leather” of the new Chrysler Cordoba.

How long have you owned it?

Why did you want to buy it?

“I have always loved older cars–I grew up around car shows and I really think my grandpa pushed that love for old cars into me too. I wanted an old car for as long as I could remember, specifically a classic Cadillac, but the second I laid my eyes on this car I fell in love, and I knew I had to have it”.

How did you find it?

“I was 15 and I had just gotten my learner’s permit, I had been looking for a car for a little bit, nothing serious, just kind of browsing. I didn’t have a lot of money because I was only 15 but I had been a waitress for a few months and had a couple thousand dollars to my name. I was driving to the grocery store with my mom, and I saw it parked on the road with a for sale sign and I immediately started saying, “Mom that’s my car!”. We went to the store and after I dragged my mom to go look at it–I was in love. It was exactly what I wanted. Less than two weeks later it was mine”.

What kind of condition was it in when you found it?

“It was in amazing condition it only had a few miles and the guy I bought it from had kept everything original on it. He made sure to give me all of the extra pieces he had too little things like the original owner’s manual and the original hood ornament. The only problems were a bit of rust under the trunk and the headliner and seats were a little beat up. Overall, the car was in great shape.

Are there any repairs or upgrades that you want to do in the future?

“I’m currently working on getting the seats redone–it was my 17th birthday gift from my grandpa, and I want to get the headliner replaced as well. I need to get the rust taken care of and a new battery but for the most part I am trying to keep it as original as possible”.

“I like to call it my boat because that’s what it feels like to drive it. It needs so much space and is so heavy it can be mildly terrifying to drive depending on the area. Going 45 mph in it feels like going 80mph sometimes so it definitely took some getting used to. I am only 5’5” and my legs aren’t very long so I have to put the seat up pretty far. This can be a problem because the only side mirror I have sits directly at my shoulder and I can’t really adjust. It’s all worth it though because driving it around with the t tops off during the summer is one of the best feelings”.

What do your friends think of it?

“All of them think it’s really cool–only a couple of them are really into cars but they all understand that it is a neat car. Taking it to both of my junior year proms brought a lot of reactions and I think my favorite was my friend from Germany. She actually rode in it with me, and my boyfriend and she couldn’t stop talking about how cool she thought it was for me to own it”.

Are people surprised when they find out you’re the owner?

“Most people are pretty shocked when they find out I am the owner, they usually expect it to be my dad or grandpa’s car. Even the guy I bought it from was shocked that someone so young wanted to–and could buy it. The reactions are always funny to me though”.

What’s the longest trip you’ve taken in it, and do you have plans for a long road trip in the future?

I have only driven it around the town I am from so never very far. I want to take it to more car shows around my state but where I live is so vast and rather empty can make it difficult to get it places without hauling it in a trailer. In the future when it is all restored, I will be sure to take it far and wide.

Final question.  Are you happy you bought it?

MSCC NOVEMBER 29 STAR OF THE WEEK: A WHITE LAFRANCE FIRE...