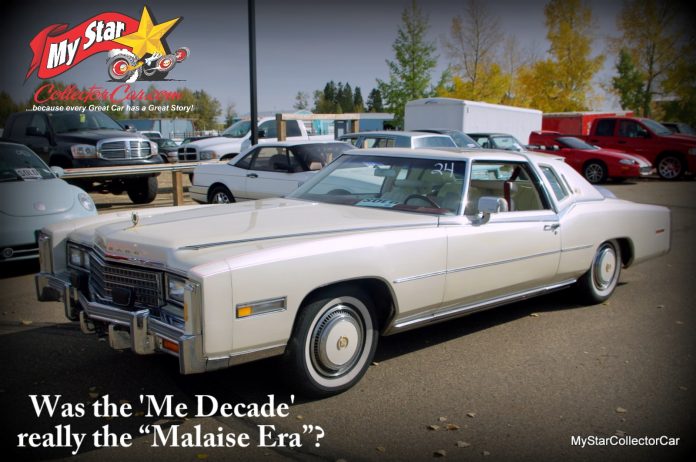 “Malaise” used to be a standalone term that referred to a physical or emotional state that is both abnormal and unsettling for its affected victims.

The underlying “Malaise Era” message is a car built during the 1970s is a piece of junk that is unworthy of any place on the list of desirable rides. Nothing could be further from the truth in our opinion here at MyStarCollectorCar because 1970s-era cars deserve a place of honor on any historical list of important vehicles.

The Malaise Era designation is a thin veneer of contempt that targets 1970s cars, one that should not be echoed by car guys simply because somebody coined the term, and then they drank his grape Kool Aid about the topic. Car guys by nature think for themselves when it comes to a project, so it is disappointing when they buy into the term and insult every car built during the 1970s.

Perhaps a brief history lesson is necessary to expand our defense of Seventies-era cars. By 1970, domestic car builders were feeling the heat from overzealous legislators because these soulless cretins were about to crush the auto industry with some new rules.

The horsepower wars that took place during the back nine of the 1960s became a target for lawmakers, so Detroit began to scale back their horsepower thresholds early in the 1970s. The net result was brute force performance became a dinosaur in a hurry.

Complete extinction of tire-melting performance was very evident by 1973 when Detroit automakers were forced to turn Secretariat-level horsepower into a gelded pony amusement ride.

Throw in heavy-handed 5 mph crash-resistant bumper legislation that made cars look like they were wearing ugly braces and the stage was set for a future automotive writer/armchair quarterback to create a vacuous term like the “Malaise Era” for an entire decade of cars.

We at MyStarCollectorCar would like to defend the 1970s domestic car makers for their ability to survive a barrage of cold-blooded bureaucrats and politicians who severely impeded their ability to build a product during the Me Decade.

Domestic auto manufacturers had to head in another direction during the 1970s-and they did it with style in our opinion. Cars built during this era had a very cool design that was a perfect blend of curves that enhanced their sporty looks. Horsepower may not have been in abundance for domestic car makers at the time, 5 mph bumpers may have been an unsightly eyesore, but Detroit’s finest were able to work around those big obstacles and build cars that looked fast, even if they weren’t fast.

Short decks and long hoods gave the Motown designers plenty of metal canvas to build cool styles during the 1970s. Throw in T-roofs, hood scoops and wild decal packages to sweeten the deal and the Seventies was a winner against all odds for domestic cars.