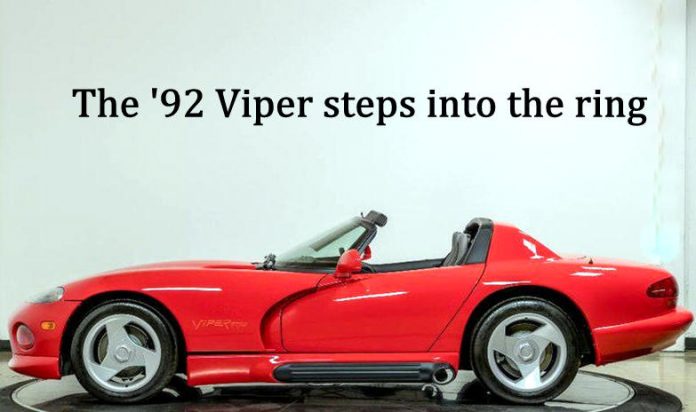 Some of our MyStarCollectorCar readers may strongly believe a domestic car built during the early 1990s is a vehicle that barely moves the dial in terms of classic status.

We at MyStarCollectorCar respectfully disagree with this notion and would like to present five good reasons why a 1992 Dodge Viper belongs on any list of automotive greatness.

The first reason a Dodge Viper belongs on any classic car list is its outrageous style. Chrysler was in the midst of a significant tectonic shift of earthquake proportions when it introduced the Viper. The mid to late Eighties were financially kind to the Mopar team because they were able to capitalize heavily on their minivan and K-car models.

These front-wheel drive models saved Chrysler from financial ruination, although the admission price was zero street respect for most of the Mopar rides that left the dealership. Chrysler produced the odd wolf in sheep’s clothing (think tarted-up Horizons and Omnis), but their bread and butter was largely a front wheel drive gelding-mobile built for functionality and good MPG numbers.

The lack of a macho image for their cars was not great for Chrysler — even if their vehicles’ sales numbers were magnificent at the time.

Enter the Viper halo car (a vehicle built for the spotlight and not the bottom line) and its obvious homage to the legendary Ford Cobra. The Dodge Viper was created so Chrysler could resurrect the bad boy Cobra image under a Mopar badge.

Which brings us to the second reason why a Dodge Viper became an instant classic: Vipers were built like Cobras in many ways, including their lack of creature comforts. In fact, a 1992 Dodge Viper did not have AC, glass roll-up windows, and even door handles on it. Most importantly, it did not have a roof.

The third reason was the neck-snapping performance of a 1992 Dodge Viper. The early 1990s were a time when Detroit had already moved toward technologically advanced powertrains with double overhead cams and massive turbo boosts to juice up the four and six-bangers like steroids for 98-lb. weakling motors. A naturally aspirated ’92 Viper was powered the old-fashioned way by comparison, and it delivered in spades.

The obvious engine lead-in brings us to our fourth reason: serious old school muscle under the 1992 Viper’s hood. The Viper relied upon its iconic 488 cubic inch V-10 engine (based upon Mopar’s LA V-8 platform)-and it had no artificial boost to produce massive horsepower and torque. The car’s message was simple: “There is no replacement for displacement”, so the Viper blew the doors off the competition in 1992.

The fifth and final reason the 1992 Dodge Viper hit collector car status the day it left the factory is this cold-blooded predator left a huge impression on the public. The Viper was a killing machine that did not haul groceries and took no prisoners.

A 1992 Viper may have been considered a halo car, but it had no kinship with angelic behavior. It was a street fighter with a big punch, an even bigger bite, and a severely tarnished halo when the tire smoke finally cleared on the street.