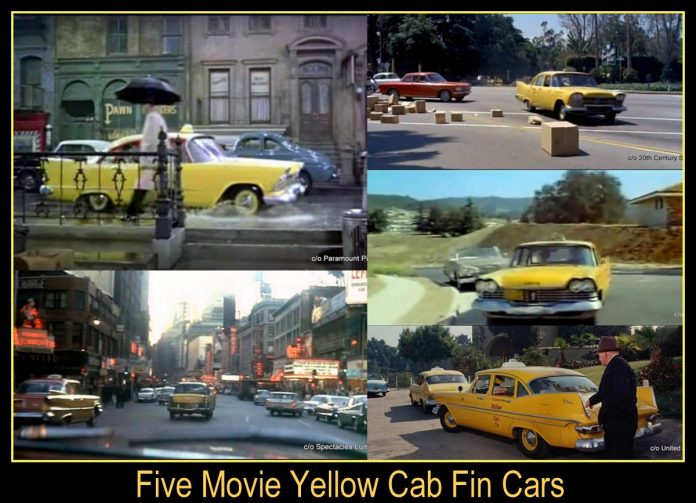 They stand out for a reason – you know if it’s yellow, and it has a TAXI sign lit up on its roof you can reasonably assume it’s a cab so you can flag it down.

The now-departed Checker Cab owned a big chunk of the market, but in the late 50s and early 60s  Checkers had some huge competition in the form of base-level Plymouth and Dodge sedans.

Hollywood is loosely based on reality, so fin cars make sense to moviegoers who would see cars like the ’58 Plymouth taxi at the end of ‘Breakfast at Tiffany’s’ would lend credibility to the scene.

The only thing that wouldn’t make sense is how the star of the show (Audrey Hepburn) could jump into a ’59 Plymouth cab that magically gets 1958 Plymouth fins when you see her inside the taxi. Despite the slip in continuity, that car in a driving rainstorm is a pretty cool way to end a movie.

The second movie fin car yellow cabs are the two ’59 Plymouths in ‘It’s a Mad, Mad, Mad, Mad World’. Those fin cars are a big part of the chase scene, so they became famous – even to the point where The Simpsons did a parody on them.

The Plymouths go out in a blaze of glory during the chase – but until ‘Christine’ showed up in the 80s, they were the most famous fin cars in movie history.

The third movie fin car yellow cab is the ’59 Plymouth in ‘Bachelor in Paradise’ –  it was far less famous than  the Mad, Mad ’59 Plymouths.. Bob Hope shows up in it at the beginning of the movie when he enters suburban life to write a book about life in suburbia.

The Plymouth disappears fast in the movie but not before it carved out a role as a bit player in a classic Bob Hope movie.

The fourth movie fin car yellow cab is the ’58 Plymouth in ‘Move Over Darling’. This was one of the James Garner/Doris Day movies and the fin car doesn’t show up until the end of the story.

Doris Day rips out of a party in a big Imperial convertible and James Garner jumps in the ’58 Plymouth yellow cab to chase her. Mayhem ensues when Doris drives the Imperial through a car wash, but the Plymouth comes out unscathed.

The Dodge cab makes a very brief appearance in the movie, but it has fins and it’s a yellow cab, so it makes the grade as a classic fin car movie taxi. There were many scenes shot in the United States so the ’60 Dodge would be very familiar to American viewers.

HOW TO TELL WHEN YOUR MOTOR IS TOO MUCH FOR YOU